Inside The Air Raid: Projecting Marquess Wilson In 2012

Share All sharing options for: Inside The Air Raid: Projecting Marquess Wilson In 2012

This is the second in a series of posts I will be writing breaking down Mike Leach's offense. I'll leave the X's and O's to Brian, Jeff and others, instead I'll be taking a statistical look inside Leach's offense at Texas Tech and how it might relate to WSU. The data used in this series comes from the 88 games of play-by-play I was able to find. The first post can be found here.

From the moment Bill Moos announced Mike Leach as the new head coach, fans and media have tried to compare Marquess Wilson to Michael Crabtree. Leach shot down the comparison, refusing to anoint Wilson as a "great" wide receiver until he develops a better work ethic and as Brian noted, the two wide receivers have very different styles.

Wilson may need to become more physical and work harder in practice, but even if you just look at their statistics, it's still not a fair comparison. Comparing Marquess Wilson to Michael Crabtree would be an insult to Wilson.

That may seem to be a gross exaggeration, but I'm not so sure. That isn't to say Crabtree was not a very good college wide receiver, but his overall numbers were largely a product of ridiculous opportunity. Let's take a closer look at Crabtree's Texas Tech statistics.

Bill Connelly has researched college wide receivers more than anyone and his work tells us the average YPT for a No. 1 target is roughly 8.6. Crabtree was very good in 2007, below average in 2008, but overall was still a very good college wide receiver. His shiny yardage totals are more of a result of an absurd number of targets rather than an elite YPT. Now, let's see how Wilson compares over his first two seasons.

As you can see, in terms of yards per target, it's really no comparison. Keep in mind Crabtree was playing for arguably the best offensive coach in the country with a quarterback who finished fourth in Heisman Trophy voting. With 115 more targets, Crabtree only out gained Wilson by just 733 yards. When people compare the two, it's often a question of whether Wilson can get to Crabtree's level. But Wilson has already been there, now it's a question of how high he can reach in Leach's system.

That isn't to say I think Wilson is going to eclipse 2,000 yards next year and catch 140 balls, I don't. But, I do think Wilson is going to be very good next season. During Leach's final four seasons at Texas Tech, his No. 1 wide receiver averaged 144.5 targets per season. If we break it down further, in Crabtre's two seasons he averaged 166.5 targets per season. In the other two seasons, the No. 1 target averaged 122.5 targets per season. Crabtree's 183 target season skews these numbers a little bit. I wouldn't expect Wilson, or any WSU wide receiver, to ever approach that level. Instead, I expect Wilson to finish 2012 with right around 150 targets. More than an average top target, but less than Crabtree's level.

Now that we have an idea of how many times WSU quarterbacks will target Wilson, we need to figure out how many of the targets he will catch. Last season, Wilson caught 66.7 percent of his targets. In the 88 games of data I tracked, Texas Tech wide receivers were targeted 3,409 times catching 67.4 percent of them. Crabtree's career catch rate was 68.5 percent. For the sake of a round number, let's assume that Wilson has a catch rate of 67 percent next season. That would give Wilson 100.5 receptions next season.

Predicting Wilson's yards per target is a little bit more of a challenge. Over the 88 games of data, Leach's wide receivers averaged 8.24 YPT at Texas Tech. Over the last two seasons, WSU wide receivers averaged 8.29 yards per target. It's not as if Wilson will go from only running verticals to now only catching short passes, so I'm not sure his YPT will be dramatically impacted in the new offense.

The other important factor here is even though it may seem like he's always catching deep passes, Wilson's YPT isn't artificially inflated by a ton of 80 yard catches. Last season, Wilson averaged 11.3 YPT despite only catching five passes of 50 yards or more. Let's take a closer look at all of Wilson's 82 catches last season. 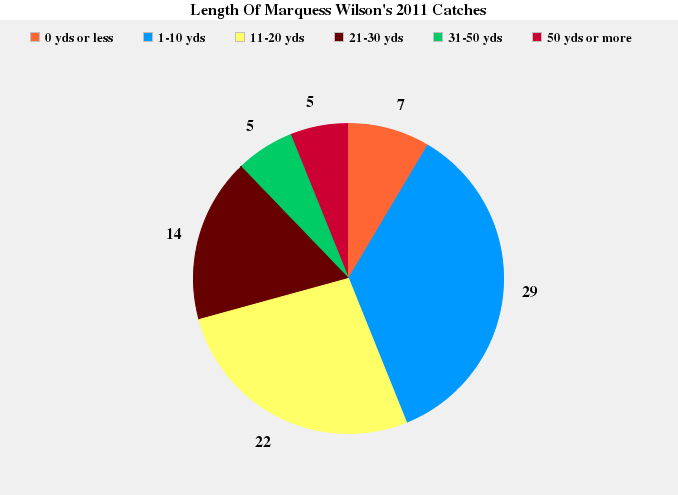 Last season, Wilson scored one touchdown per every 10.25 targets. In Leach's offense, it wouldn't surprise me if Wilson's TD rate increased, but for now we'll keep it at last year's production. With 150 targets, Wilson is looking at 14.6 touchdowns.

If you're wondering, that would leave Wilson with career marks of 238 receptions, 4,029 yards and 33 touchdowns. All three would be WSU records and Wilson would be 111 receptions and just 976 yards from the FBS career receiving records. If he maintains his level of play and stays for his senior season, Marquess Wilson could go down as the best statistical wide receiver in college football history.