Share All sharing options for: Wave The Flag: Masters Edition

This may not make it into the next WSU commercial -- or it might! -- but it was pretty cool to see. If you were watching The Masters on Sunday and happened to stick around until the end, you might've spotted something familiar in the background. As Bubba Watson was going through the second half of the Green Jacket Ceremony -- the part on the 18th green -- the CBS cameras happened to catch a WSU fan.

The fan couldn't be seen, but the logo was sure visible. 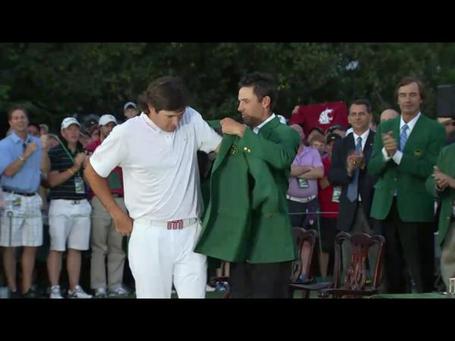 So there you go. WSU at The Masters.