Share All sharing options for: Pullman's Biggest Threat: Squirrels On The Loose

Back in high school, I took Running Start classes at Green River Community College. It's a nice campus, nestled away on a hill near Auburn, just off Highway 18. The sprawling campus sits amidst what is essentially a forest.

The location and wooded area mixed nature with college, and the local wildlife kept its run of the place. Particularly, squirrels were far from shy, letting their presence be known on a daily basis.

It became sort of a thing for Green River students, a running joke about the squirrels that inhabited the land. Walking between classes, one would see numerous squirrels -- some just meandering along the pathways, others foraging for food.

They became so friendly that many would walk right up to students, begging for food like a trained puppy. Often, squirrels could be spotted peeking into trash cans or taking a seat on a bench next to a student resting between classes. I once saw a squirrel carrying a full cheeseburger -- the cargo was as big as the squirrel itself.

These were trained, perhaps domesticated, squirrels. But friends, we have a problem in Pullman -- a squirrel problem. These creatures are getting into trouble, and doing so with no regard for the resources it takes to free them from their own mischief.

For many, it started off innocently enough with a squirrel stuck in a peanut butter jar. A poor little guy needing to be rescued. The incident received widespread publicity, putting a spotlight on the Pullman squirrels. But it was far from the first, and certainly not the last.

Just a few months later, there was the squirrel looking to find some food in a dumpster. He fell in, leading to what was, presumably, a frantic 911 call. This time, the poor lil guy was saved, and the responding officer took preventative measures, hoping to avoid future incidents.

But then things started getting more serious. Imagine walking outside one afternoon to find a squirrel doing pullups in your front yard. 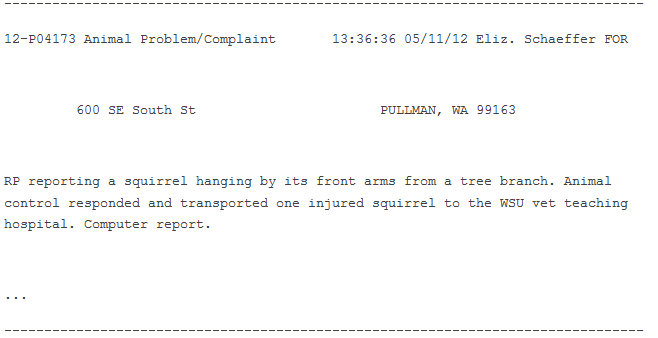 Could this squirrel, hanging by its arms, perhaps trying to strength its upper body, be a well-known offender? We ask, is this squirrel the same one police encountered a year ago?

Sadly, some squirrels have been naturally selected along the way, as well. On the same day one squirrel was doing pullups, another perished across town, just about a mile away.

You may think this is a new problem -- that these squirrels are taking over the town as part of a somewhat recent breeding spree. But it's not. In fact, squirrel crime was a problem all the way back in 1996, as documented by the Spokesman-Review. 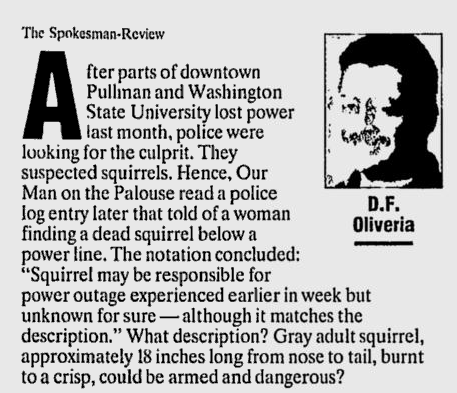 But let's go back even further, to 1994. It was then that another squirrel got frisky with a power line along Stadium and made the whole city go dark while snarling traffic on the campus' main thoroughfare.

"We got there and we found the line down and a fried squirrel," he said. "He was still smoking when we got there ... I directed traffic for two hours next to a smoking little corpse."

Around the same time, a second power line went down in Moscow. Coincidence or coordinated attack?

Now, you might be wondering where this squirrel infestation came from. Since we're thorough, we have an answer for that precise question. Or, at least, an urban legend.

I don't recall the precise story anymore, but a former employee for Pullman's Parks and Recreation department released two male eastern gray squirrels to solve some sort of problem that could have been solved more conventionally.

The problem was that the squirrels were not both males. Only one was. So now we have a plague of the pests here.

You'd think these squirrels are harmless creatures, just wandering about, looking for snacks. How much trouble could a little, furry, overgrown rat get into?

But banded together, these squirrels form a sophisticated crime syndicate, posing a huge threat to Pullman and the surrounding area. They're working out, trying to get stronger. They're becoming more brazen.

Those attacks more than a decade ago? Precursors. Warning shots.