Mike Leach Signs Book With 'CJK5H': Here's How It Happened

Share All sharing options for: Mike Leach Signs Book With 'CJK5H': Here's How It Happened

Since this has been making the rounds, we might as well do something with it: 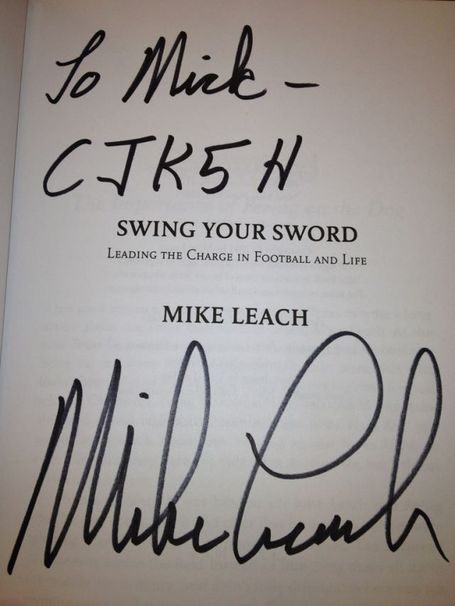 Of course, there are questions, too. Did Mike Leach know what it means (Craig James Killed 5 Hookers, for those living in a cave)? Was it his idea to sign like that? Did he talk to the person about the meme? Important questions!

The answers to these questions are probably less than exciting than the inscription would have you believe. Leach's book signing seems to have been on par with a normal book signing, all the way down to how inscriptions were done. It appears the staff at Barnes and Noble was writing inscriptions, given to them by those in attendance, on a Post-It and handing them, with the book, to Leach. The crowd would go say hello, perhaps asking questions, and he'd sign according to what was on the note.

Alex Henery's Foot and I attended the signing. Leach looked at my inscription request and said something to the effect of "CJK5H... I'm going to have to think about that one for a while"

So there you go. Maybe he knew. Maybe he didn't. The beauty is the plausible deniability that won't get Leach sued or in any real trouble, despite the Internetz blowing up about it. If nothing else, it's a fun story.

Edit: Leach discussed this today. Basically, he said "I didn't know what I was signing ... I mean, I don't care." It's in this segment of Unsportsmanlike Conduct, though the player is a bit hit-or-miss.