Before we get to my story, I'd like to point out that for this series to continue to exist, you all need to participate. So far two of you have and you are both awesome. As for everyone else, do not make me Facebook stalk you and Photoshop you into this photo. Then, I will create a photo blog and publish all of the pictures. And if you don't think I will, you are mistaken.

Now that the threatening business is out of the way, it is time to officially start this series. When I first thought of the idea, I liked it because everyone else would be telling their story. Then I realized I would also have to tell mine. As it turns out, narrowing it down to one memory is not easy. Considering I attended WSU from 2004-2008, you would think my favorite memory would be basketball related, but instead, it involves watching the football team during one of its lowest lows.

Like all good stories, this one started at a bar. I was watching college football with friends and somehow the topic shifted to neutral site games. My opinion was I hated them. While my friend, a Notre Dame fan, liked them. During the discussion, he looked up Notre Dame's future schedule and as fate would have it, the Irish would be playing a neutral site game against WSU in San Antonio the following season. After a few more drinks we decided we needed to go to that game.

Fast forward about a year and I'm on a plane from Seattle headed to Austin, Texas. My friend flew in from Chicago and we decided to start the trip in Austin because we'd both heard good things. As we were out in Austin the Friday night before the game, I started seeing people in WSU gear. As we went from bar to bar, I kept randomly hearing a "Go Cougs!" from across the bar or the other side of the street. This probably happened three or four times that night, my friend even remarked that WSU fans were "everywhere." He saw no Notre Dame fans that night.

The next morning, we headed to San Antonio for the game where we met up with some other friends who lived in the area. It was a night game, so we headed to the stadium around 2 p.m. expecting a few hours of fun tailgating. The cab driver dropped us off in an area loaded with Notre Dame tailgaters, but as we walked through the parking lot it felt more like people eating breakfast at a park and ride than it did a tailgate.

We made our way up to the stadium where we were greeted by a massive WSU Alumni Association event. I enjoyed a few drinks with some fellow Cougs while my Notre Dame friends enjoyed the concession line. Notice the Notre Dame fans in the picture below jealously looking on at the event from behind the fence. 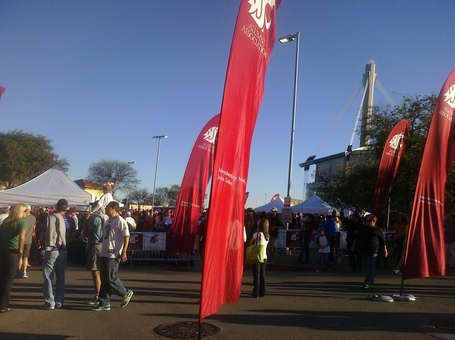 About an hour prior to the game, we headed into the Alamo Dome. I was behind my friends in the entry line, they had their tickets scanned and walked in. I handed my ticket to the usher, he scanned it and it came back invalid. He scanned it again, invalid again. I yelled to my friend Danny, but he didn't hear me and disappeared into the crowd. I asked the usher to scan one more time, he did and it came back invalid again. He told me my ticket was no good and I would have to step aside.

I have no idea why my ticket came back invalid since all four were purchased at the same time, but there I was stuck outside of the Alamo Dome with a dead cell phone and an invalid ticket. The usher sarcastically suggested I call the person I bought my ticket from. He seemed to be enjoying the fact my ticket didn't work, probably a Notre Dame fan. As I contemplated my odds of successfully sprinting by the usher and evading security, two Coug fans in line behind me came up. One said, "I have an extra ticket, here you go" he then handed me a ticket and said "Go Cougs" before turning to head into the dome. The shocked look on the usher's face after I handed him a second and working ticket was worth the trip alone. 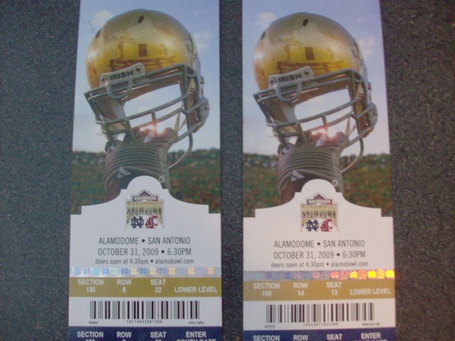 The game itself pretty much sucked, as you can see from the picture below. In fact, I think Golden Tate just scored another touchdown. At least I got to enjoy a few drinks with some WSU fans on the Riverwalk following that disaster. 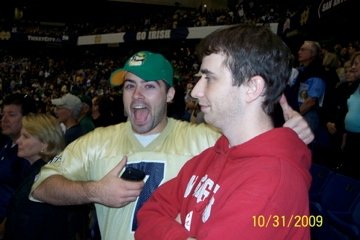 The Cougs lost 40-14, I spent two hours the next morning stuck on the runway sitting next to a crying baby and yet I still remember that trip fondly. People always talk how WSU is such a close community and how you are part of a big family. That weekend is my best example of that talk being true and that's why it's my favorite WSU memory.

Next Friday, Shellin will tell the story of his favorite WSU memory. If you would like to participate, email me here.