Today's story comes from Shellin (who you can follow on Twitter @shellin1). If you'd like to participate in this series, you can find more information here.

In my time at WSU I had countless amazing memories: from storming the court against Gonzaga in 2006, to standing in line for 36 hours for the 2011 basketball game against UW, to having the privilege of working for the Alive! Orientation Program for two summers, to being the first member of my family to receive a degree. Despite all of the other amazing experiences, there is one memory that stands out far above the rest.

Without much hesitation I can say that I have never loved a sports team as much as I love WSU basketball. I arrived in Pullman in 2006, just in time to see the Bennett teams make two straight NCAA tournaments, and was hooked from the get go. Despite the talent level dropping off after those first two years I still remained a diehard fan. This reached it's peak in the 2010-2011 season where my group of friends and I were always the first people through the doors at Beasley, and when we made the Big Head signs. I thought showing up early and supporting the team was fun, little did I know that our dedication to the team would result the in opportunity of a lifetime for myself and one of my friends.

On Friday, March 25, 2011, two days after the Cougs defeated Northwestern in the NIT Quarterfinals, I received a phone call from my friend Jeff. President Elson Floyd had called Jeff and asked him if he was the guy in the front row of basketball games with the Big Head signs. President Floyd then told him that he and a friend (myself) were invited to fly, for free, on the charter, and stay, for free, in New York City to watch the game, also for free. As it turned out, the flight they had chartered to send the band and spirit squad had two extra seats on board. I'm still absolutely dumbfounded that WSU offered those two seats to us and gave us an all expense paid trip to New York City just because we showed up early to basketball games and printed off half-a-dozen signs.

When we arrived at Interstate Aviation the next morning we found out that we were considered to be personal guests of the Office of the President, along with numerous high rollers from the university, including Mrs. Floyd (President Floyd couldn't make the trip for some reason that I no longer remember). I haven't flown very often, but I know that our charter flight from Pullman to Newark, NJ spoiled me for all of my future flights. Not only was boarding completely unobtrusive, but we were given first class seats right next to Mrs. Floyd, Jimmy Johns catered the flight, and flight attendants even baked us cookies while in the air. Even better, we were able to work it out before the flight that the Big Head signs would be able to fly out to NYC with us.

Jeff and I were given almost no information about the trip, other than our flight, lodging and tickets to the game would be paid for, and that we needed to show up at the airport on time. Once we landed in Newark and drove through the Lincoln tunnel we were pleasantly surprised to find out that we would be staying at the Marriott Marquis, located right on Times Square, which was the same hotel that the team was staying at. Mrs. Floyd offered to buy us dinner so we took her up on the offer and on our way to the restaurant we ran into the team who was on their way back from practicing at Madison Square Garden. While at dinner our whole group decided to go to the Today Show the next morning and wake up at some obscene hour (at least for someone who had their internal clock set to Pacific time) to walk over to Rockefeller Center where they film it.

After dinner we me up with everyone's favorite student manager, Neil Stover, to go walk around Times Square. Neil informed us that he had seen Chris Fowler, host of ESPN's College Gameday, in the lobby of our hotel. We went back to the elevators to head up to the lobby and right as we arrived we saw Chris step out of one of them. I flagged him down and he happily agreed to take a photograph with us and our 4x6 WSU flag that we happened to be carrying with us at the time. I don't remember much of the conversation we had with him, other than him saying that he "loved the Wazzu" and asked if that particular flag had ever made it out to Gameday (which it had not). 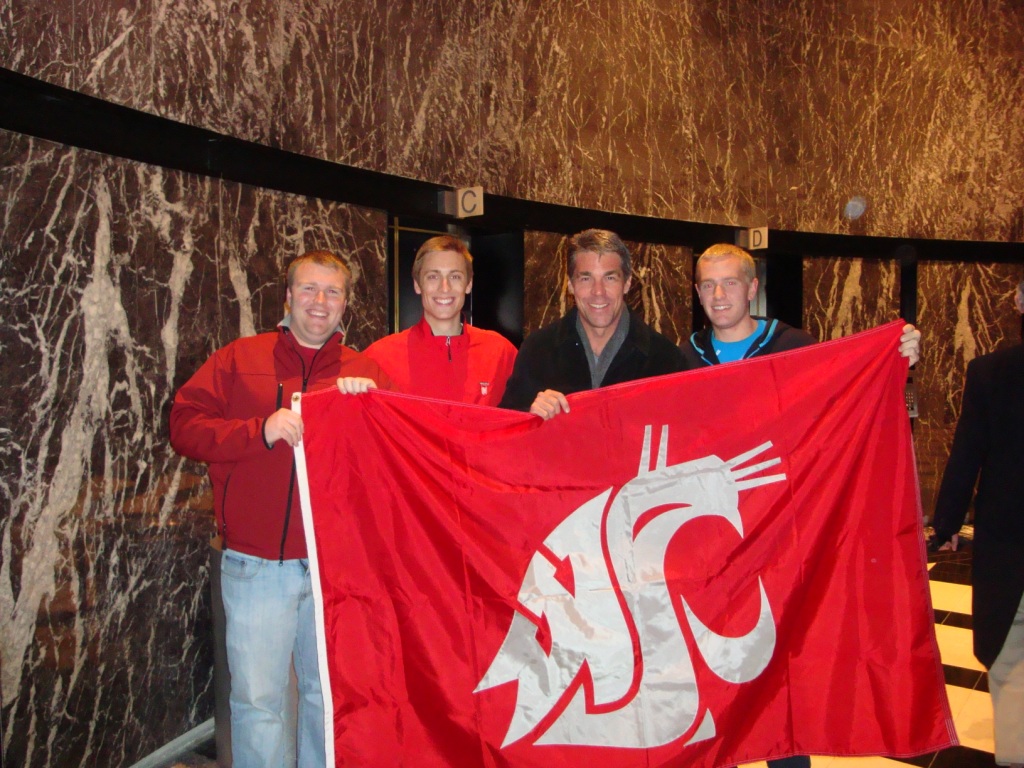 After a night spent wandering Times Square, we woke up to head to the Today Show with the Big Head signs. We spent the duration of the show doing anything we could to get them on camera, with Jeff trying particularly hard to make sure that our giant Neil Stover head got as much face time as possible. After the show we learned that an elderly couple who had flown out with us had hung the WSU flag backwards over the railing, but other than that I would say the Today Show was a success. 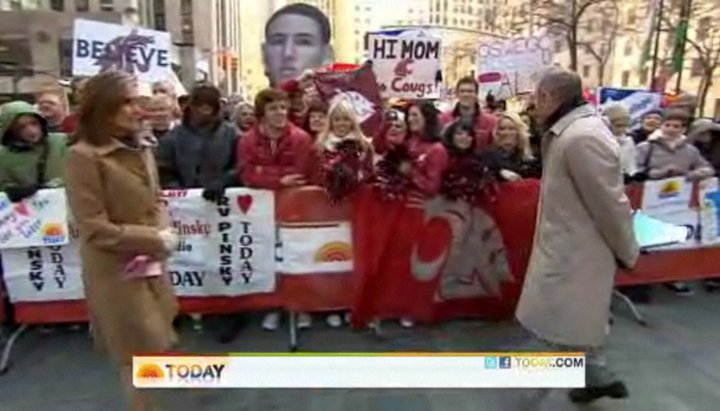 The WSU Alumni Association had a function at a Stout Public House just prior to the game against Wichita State, but other than that there was nothing planned, so Jeff and I took off to do all the touristy things we could possible accomplish in a day. We got to see the top of the Rock, Grand Central Station, the Brooklyn Bridge, Wall Street, Ground Zero, Central Park, and the Guggenheim Museum, taking pictures with the WSU flag at nearly every stop. 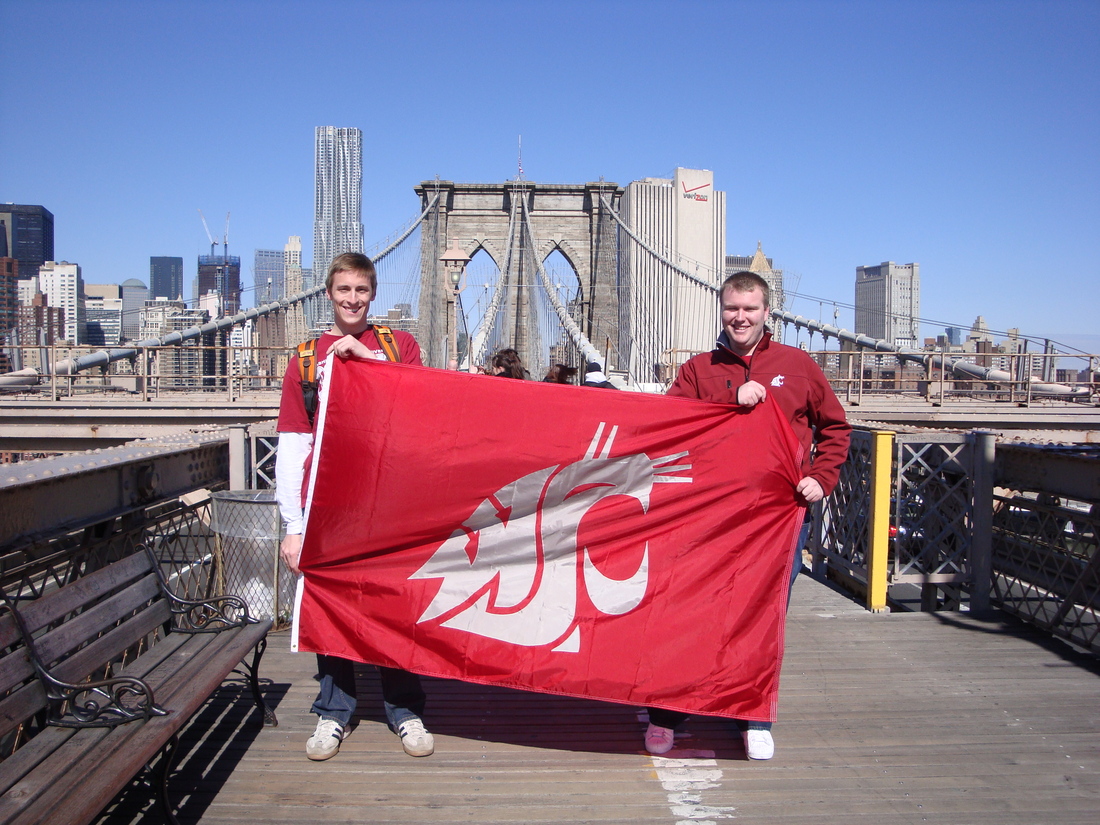 The Alumni Association event itself was a lot of fun. We walked over to it from our hotel and spent the majority of the walk talking with Bill Moos, who was more than happy to answer all of the questions we had. At the event SDCoug (from over at Cougfan.com) introduced us to everyone there as "The Presidents of the ZZU Cru" and bought us a drink, and Bill Moos gave a rousing speech about how important the NIT could be to our basketball program.

Unfortunately the game didn't live up to the rest of the trip as the Cougs got absolutely hammered by Wichita State. The trip to New York City only lasted 56 hours from the time we took off in Pullman until the time we arrived back, it also ended with one of the worst basketball games I have ever seen. Despite that, the trip was one of the greatest things I have ever experienced in my entire life. My five years spent in Pullman were amazing, but that trip to New York will always be the first thing that I think about when anyone asks me about my college experience.

Next Friday, msgp501st will tell the story of his favorite WSU memory. If you would like to participate, email me here.