Fridays during the summer have essentially been barren wastelands when it comes to WSU news, but not today. Not only do we have football news, there are also basketball and even baseball links.

Let's start with the basketball news from yesterday with WSU officially announcing the men's team will head to Australia for a preseason tour in August. The team took a similar trip in 2007. They will travel to a few cities and play some pro teams from Australia's NBL. At worst, this was a brilliant plan by Ken Bone. If Brock Motum was having any second thoughts about returning to Pullman, they could kidnap him and bring him back. Christian Caple has more on the trip in the links after the jump.

Bud Withers of the Seattle Times took a tour of the Cougar Football Project recently and has this terrific recap. Withers story is chalked full of details, including the fact the new visiting athletic directors box is four times the size of the old one. There is also the fun fact that the new press box has twice as many elevators (4) as the old press box had toilets (2).

Finally, in case you missed them yesterday here are two GIFs I made recently that are making the rounds. They really have no reason to be in this post, but hey why not. 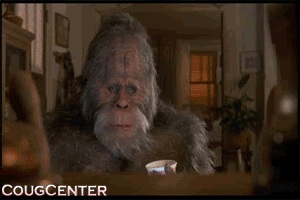 Pac-12 all over Athlon All-America teams - Pac-12 Blog - ESPN
California's Keenan Allen and Washington State's Marquess Wilson are the second-team receivers. When you toss in USC's Marqise Lee on the third team, Athlon has four of the nation's top six receivers coming from the Pac-12.

On a mid-summer mission to Pullman, I just took a tour of Washington State's Cougar Football Project, the name given to the three-story south-side edifice that replaces WSU's antiquated (and inadequate) press box.

Cougars announce Australian basketball excursion - Spokesman.com - July 12, 2012
The Washington State men’s basketball team will travel to Australia for a two-week trip beginning Aug. 3 that will include games against five Australian teams and stops in four different regions of the country, the school announced Thursday.

WSU men's hoops headed to Australia - SportsLink - Spokesman.com - July 12, 2012
WSU made it official today — the men's basketball team is all set for a tour of Australia that will begin in early August and include games against five different Australian teams. Read on for more details from the school's official release.

Derek Jones back where it all began | HeraldNet.com - Sports
Dave Jones has never tabulated the miles, but it's pretty clear that his travels to support his favorite baseball player have kept him moving over the years.