It only makes sense to follow up the quarterbacks with the wide receivers. This is the Air Raid, after all, where we expect Jeff Tuel and Marquess Wilson to make sweet, sweet music until the early morning hours. (That's not weird or anything, right?)

What We Think We Know

Marquess Wilson is poised to put up even more video game-ish numbers than the video game-ish numbers he put up last year. The things Wilson has done in two years in Pullman are unlike anything we've ever seen in this program before, and it's been done in relative anonymity thanks to the sad shape of the team's results under Paul Wulff. College football-niks already are well aware of Wilson's exploits, but this year is likely the time the rest of the country gets introduced to the best receiver in WSU history.

As Mark detailed a few months ago, the numbers Wilson put up last year were staggering (I'll seriously use any excuse I can find to link that fantastic post), but the numbers he could put up under Mike Leach are potentially eye-popping. Wilson had 123 targets last season; Michael Crabtree averaged 166.5 targets in two seasons at Texas Tech. At 11 yards per target (a reasonable figure) and 160 targets (a bit optimistic, but not crazy), Wilson would put up more than 1,700 yards.

But even if he doesn't see that many targets and the ball gets spread around a bit -- Crabtree's targets dropped in his second year after the Big 12 caught on, and Pac-12 coaches are well aware of Wilson -- he'll still shatter most every receiving record in WSU history. That's incredible for a guy who's played on two awful teams and had three QBs (primarily backups) throwing to him last year.

With WSU's best QB throwing to him every game in an offense that will chuck the ball more than ever before, the rest of the country is going to be all like, "Where the heck did this guy come from?" And we all will just smile and nod.

This won't be a one-man show. Again, thanks to some great work by Mark, we can expect somewhere around seven -- yes, seven -- receivers to make significant contributions this season. Take it away, guru of wide receiver target analysis:

Going back to the 2007 Texas Tech season, seven different wide receivers were targeted at least 20 times. At the start of fall camp next season, the Cougars will have three wide receivers with 20 or more career targets. Wilson leads the way with 218 career targets followed by Gino Simone with 98 and Bobby Ratliff with 41. The next highest is Kristoff Williams with 16.

In fact, if we look a little deeper at the numbers from 2006-2009 we find that Leach's top seven wide receivers account for nearly 75 percent of total targets. 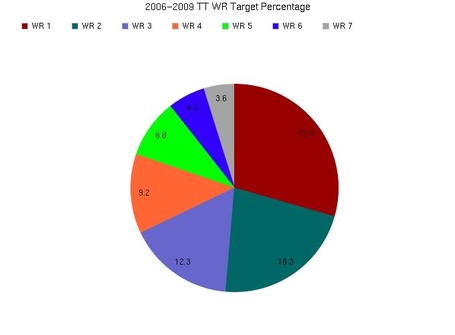 The transition to the Air Raid shouldn't be too rough. We touched on this in the quarterbacks preview, but WSU already used a number of Air Raid concepts in its offense under Todd Sturdy. Sure, Leach has his own specific ways that he wants things done, but this isn't going to be a completely foreign language for them. Like the QBs, these guys ought to be able to hit the ground running.

What We Don't Know And Need To Find Out

How will defenses in the Pac-12 deal with the Air Raid? This offense, in a lot of ways, is "pick your poison." How defenses will try to defend the passing game is the central question for every coordinator facing an Air Raid offense. Do you want to defend it straight up and potentially get burned by Wilson? Or, do you want to cheat coverage to Wilson and give up a plethora of passes to the other receivers? Or, do you blitz like crazy and hope you get to the quarterback before he has a chance to find the inevitable open receiver? Although football is the ultimate team game, the answer to this question will determine which receivers will bear much of the responsibility for the offense's success.

Can Wilson be an unstoppable force? The mark of a truly great receiver is that he's able to find ways to get open and produce, even when everyone knows he's getting the ball and the defense is draped all over him. We know Wilson can dominate on a bad team that was generally playing from behind; will the same be true on a competitive team? And if defenses decide they're going to try to take away Wilson, will he still be able to get open? My sense is this is why Leach rode Wilson so hard during spring drills -- it's going to take a lot of resolve for Wilson to fight through what's likely coming his way this season.

Are the other primary receivers as good as we think? The Air Raid relies on threatening all parts of the field, so the success of this offense is almost certainly going to require more than just Wilson. But how well will the Cougs be able to do that? WSU fans have fallen in love with the potential of this receiving corps, even though what Wulff recruited over the last couple of years has produced precious little in terms of actual on-field results.

Kristoff Williams, Bobby Ratliff and Andrei Lintz had 44 catches combined last season. Ratliff was the most productive, with 28 catches for 348 yards, including a 97-yard performance against Utah. However, it's worth noting that 47 of those yards and his one TD came on a trick play (although he does deserve a lot of credit for the run after the catch). The physical tools are undeniable with these guys, but the jury is still very much out on how well it eventually converts into production. If you're looking for a positive sign, though, consider that Ratliff caught nearly 70 percent of the 41 passes thrown his way. That's excellent.

Another bit of good news, of course, is that these guys will have plenty of opportunities to show what they can do, and should benefit from the attention Wilson will receive -- the Air Raid is all about the geometry of football, and that geometry is almost certainly going to be skewed to whichever side of the field Wilson is on.

We've heard a lot about Williams, Ratliff and Lintz, but it's time for those guys to prove that fans are right to put such faith in them.

Is the depth there? Again, our fans are convinced that it is. But we just don't know. Here's your top seven returners in terms of yards per target (again, via Mark):

If the usage and order remain the same, you are looking at roughly 100 targets going to wide receivers who averaged a combined 4.4 YPT last season. Having 15 percent of your pass attempts go to players who produced that far below average will simply not get it done.

Now, this obviously isn't likely to be accurate, given that there are a host of newcomers that will vie for time -- redshirt Dominique Williams and incoming freshmen Gabe Marks, Robert Lewis, Rahmel Dockery, Alex Jackson and Drew Loftus will be among those trying to wedge their way into Leach's considerable rotation. But all of these guys are more or less unknown commodities.

The higher their level of production as a group, the more explosive this offense is going to be.