I haven't been up to The Cougar Football Project since spring ball, despite Martin Stadium being just a few minutes from where I live. The last time I saw it in person, it was just a hunk of steel with scaffoldings still guarding the structure. After seeing webcam photos and pictures from WSU recently, though, I decided to wander up and check it out again.

The differences between now and back in April are astounding. The scaffolding is gone and the facade is in place, complete with "Washington State University" in wonderful white lettering atop the structure. The new press box, luxury suite and club structure is massive, and truly impressive to see in person.

The project appears to be moving right along and is, at last check, about a day ahead of schedule. Most of the work is being done on the interior at the moment, though there's still quite a bit left to be done between now and September. But it's taking shape, and boy is it something that'll leave visitors' jaws hanging.

Let's check out some photos, shall we? As always, you can find out more about the project -- and donate! -- at its website.

This is the view just inside the gates of the student entrance. Upon entering the stadium, the Cougar Football Project smacks you in the face. It's a pretty impressive sight. 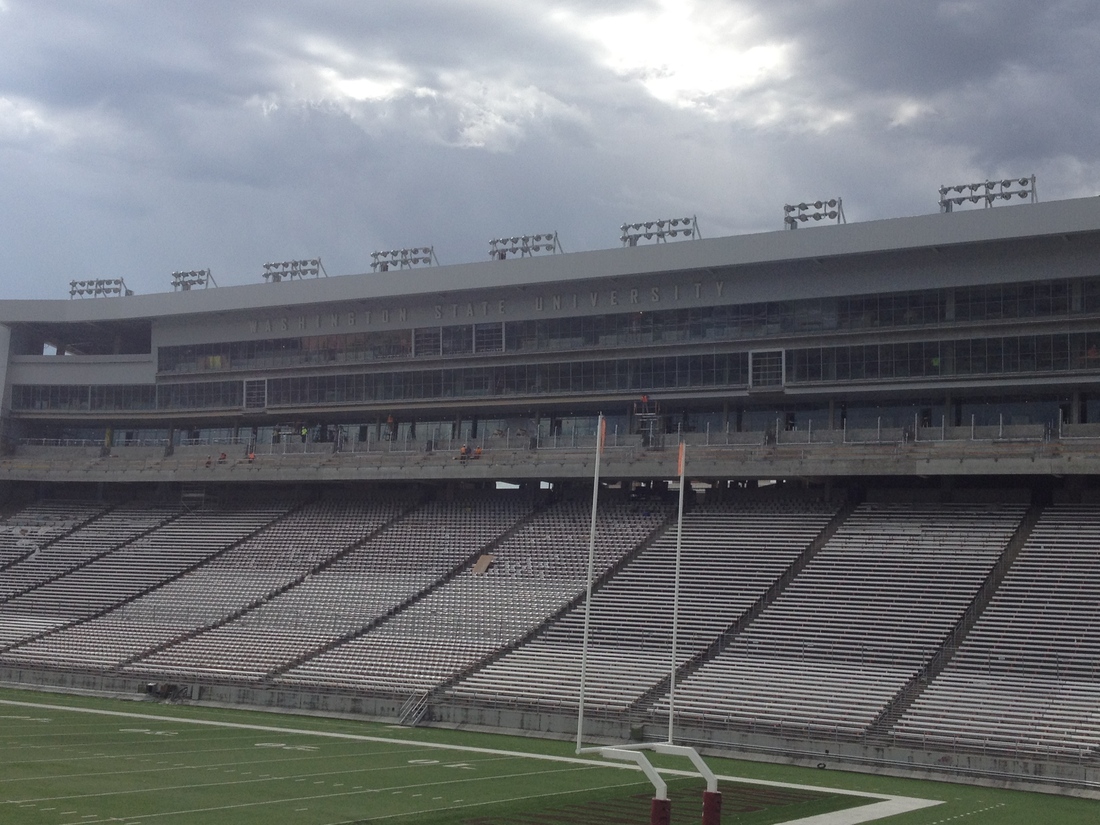 Moving down the student section side of the field, this was taken a little over halfway up the upper-level at the 50-yard-line. 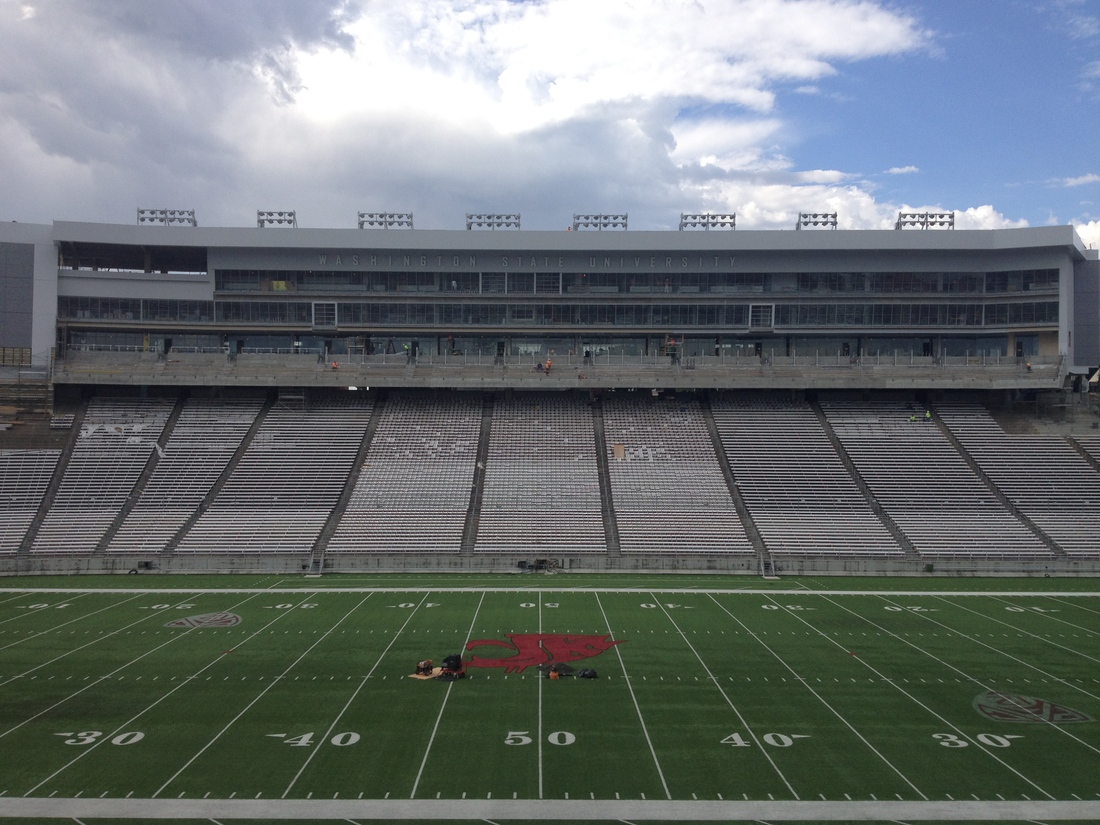 Same location, but down against the rail just above field-level. 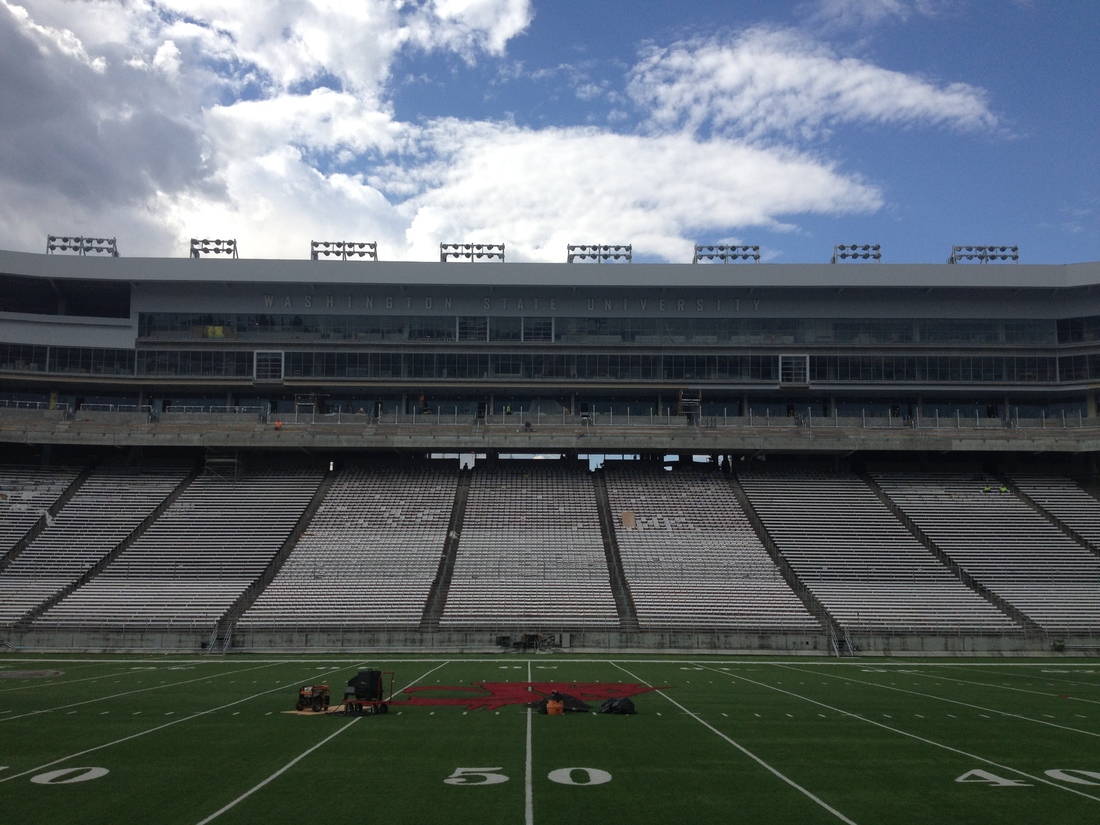 This one comes from the Stadium Way side, just as the bowl begins to bend near the back corner of the end zone. It's also a great spot to see the Cougar logo mounted on the side of the project. 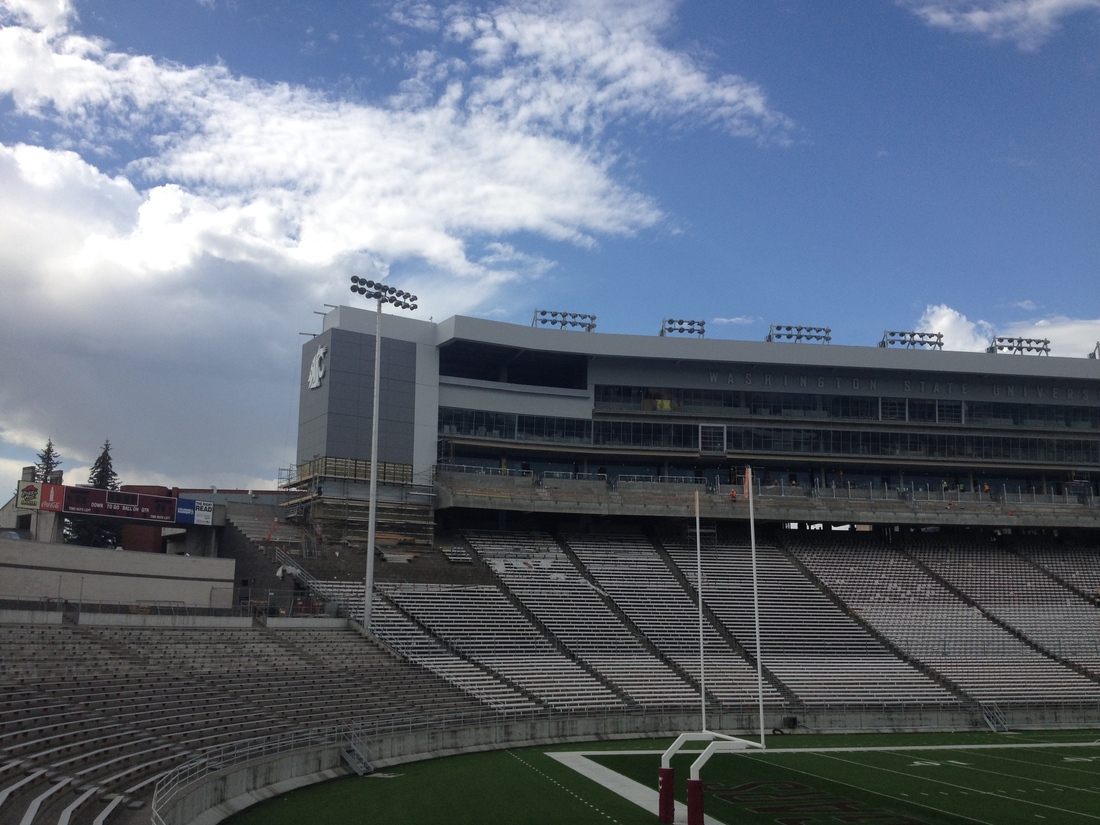 My uneducated eyes lead me to believe the two different grays used on the building match the grays Washington State is using for its uniforms. It wouldn't surprise me considering the emphasis on having one set of colors across everything and the consistency in branding. 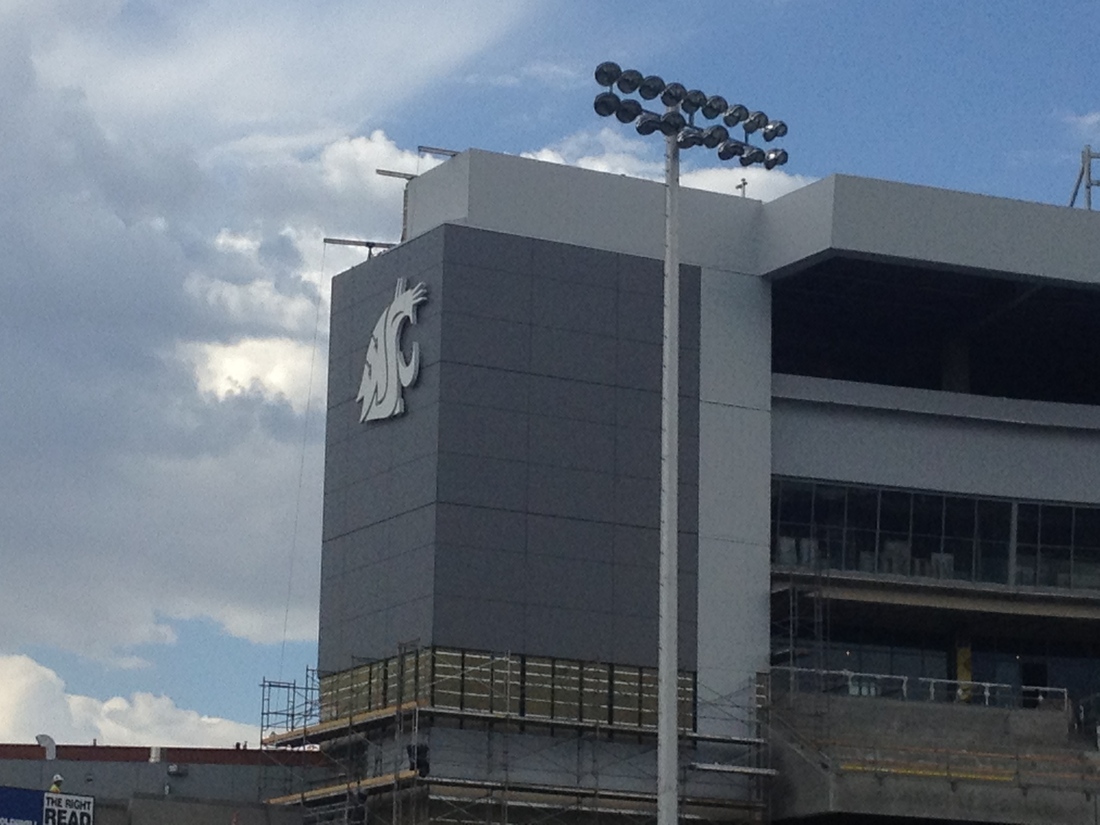 Of note, it appears the Cougar logo is backlit. A photo was tweeted out last night showing it lit up, though that photo was later deleted. We're waiting to see if a WSU photographer takes a shot of it. The light was, unfortunately, turned off by the time I went up to check it out last night.

Same spot, looking out over the field. 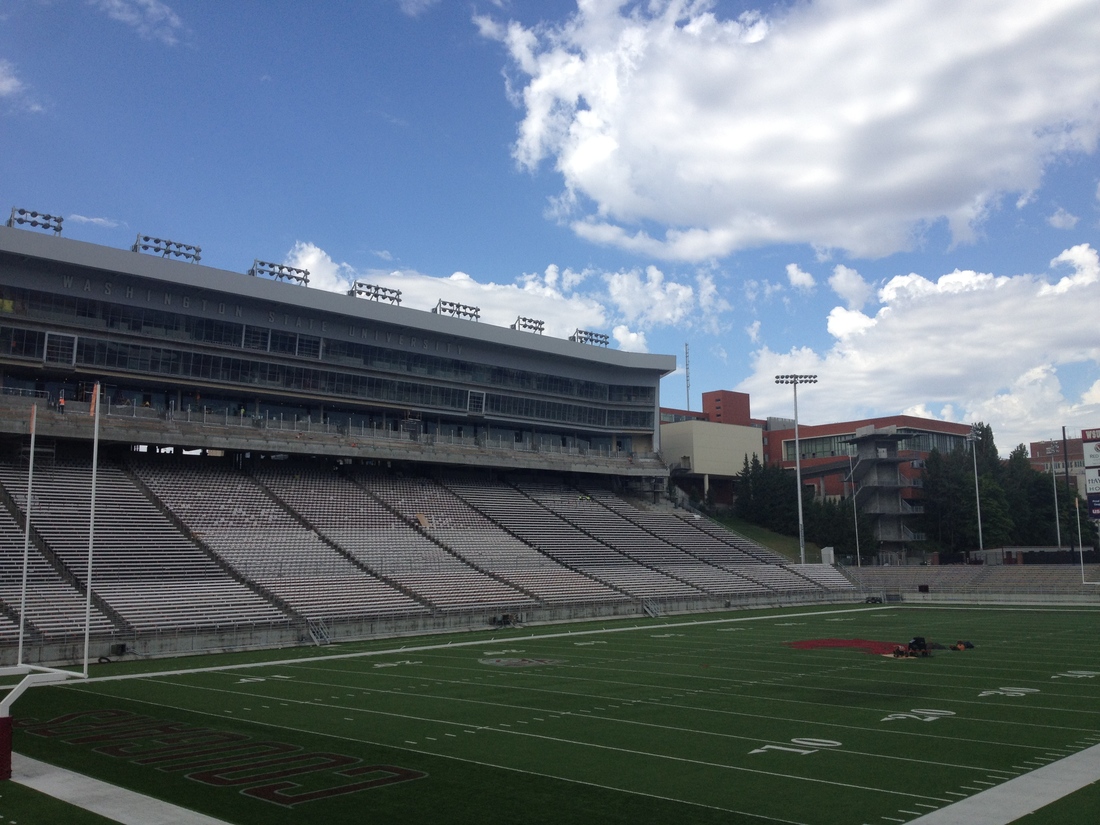 And looking straight at the behemoth. 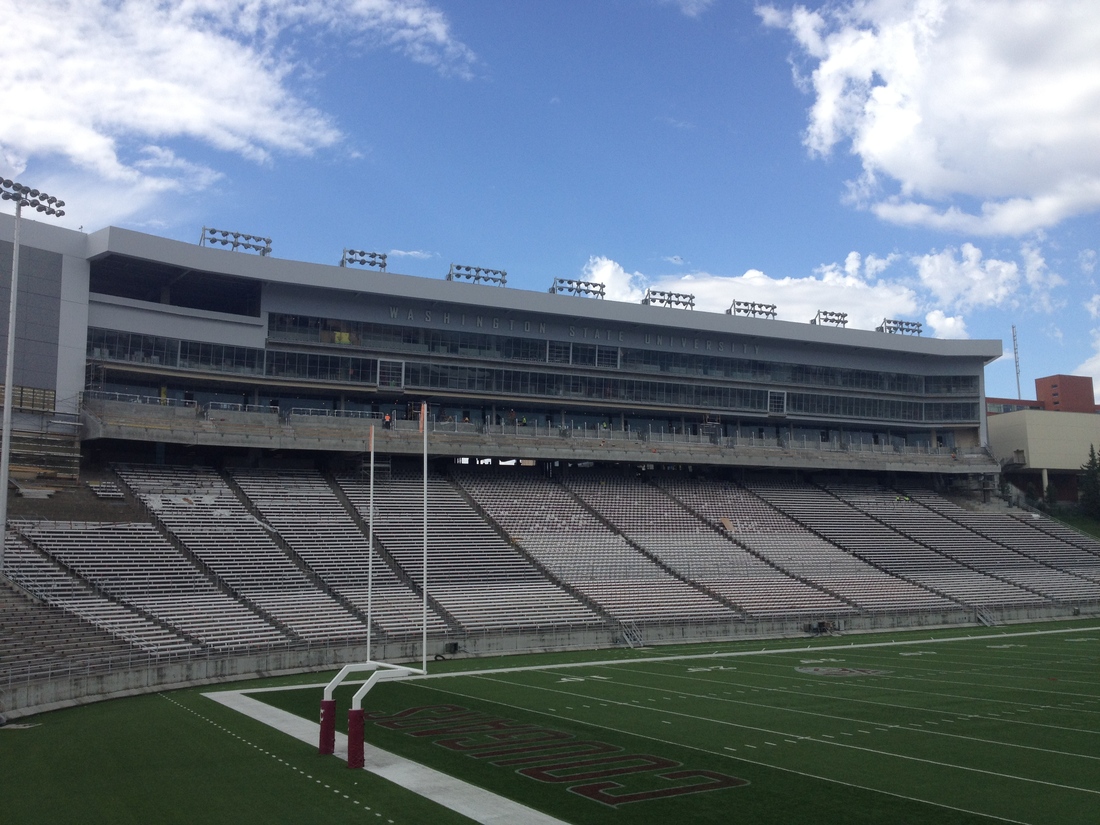 Heading to the opposite corner, here's what it looks like up close. 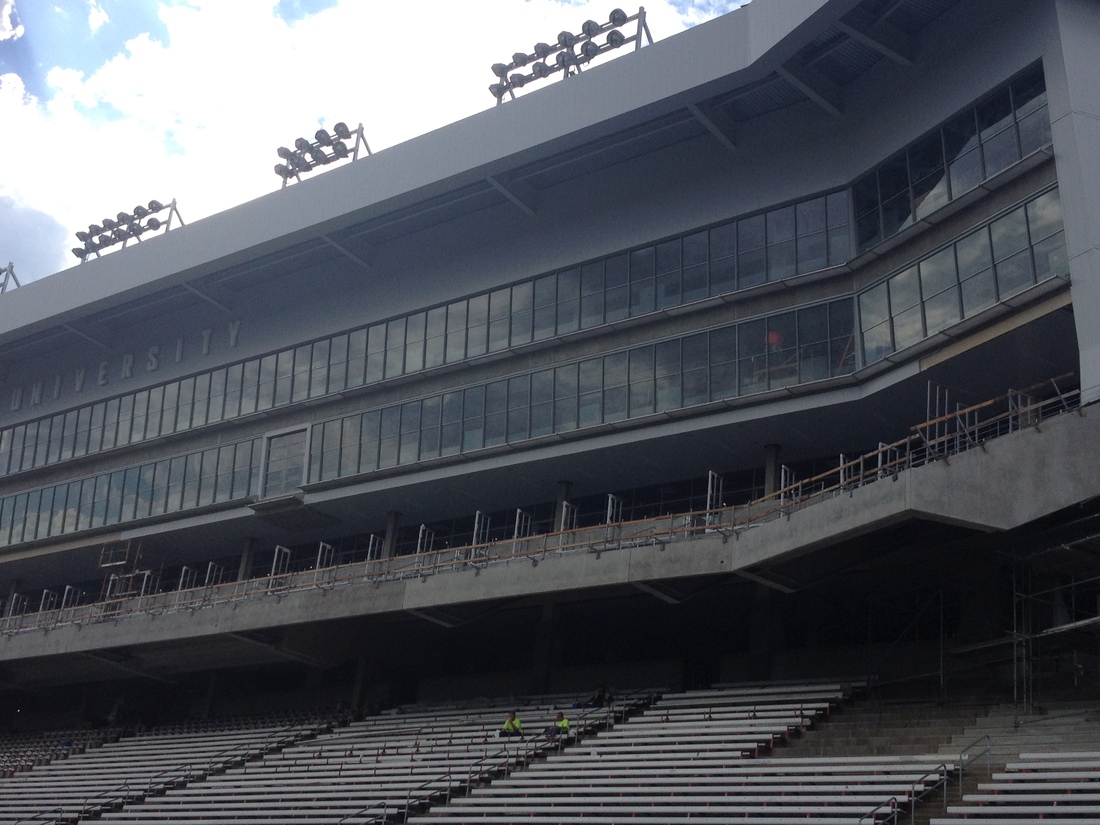 And a little further away. 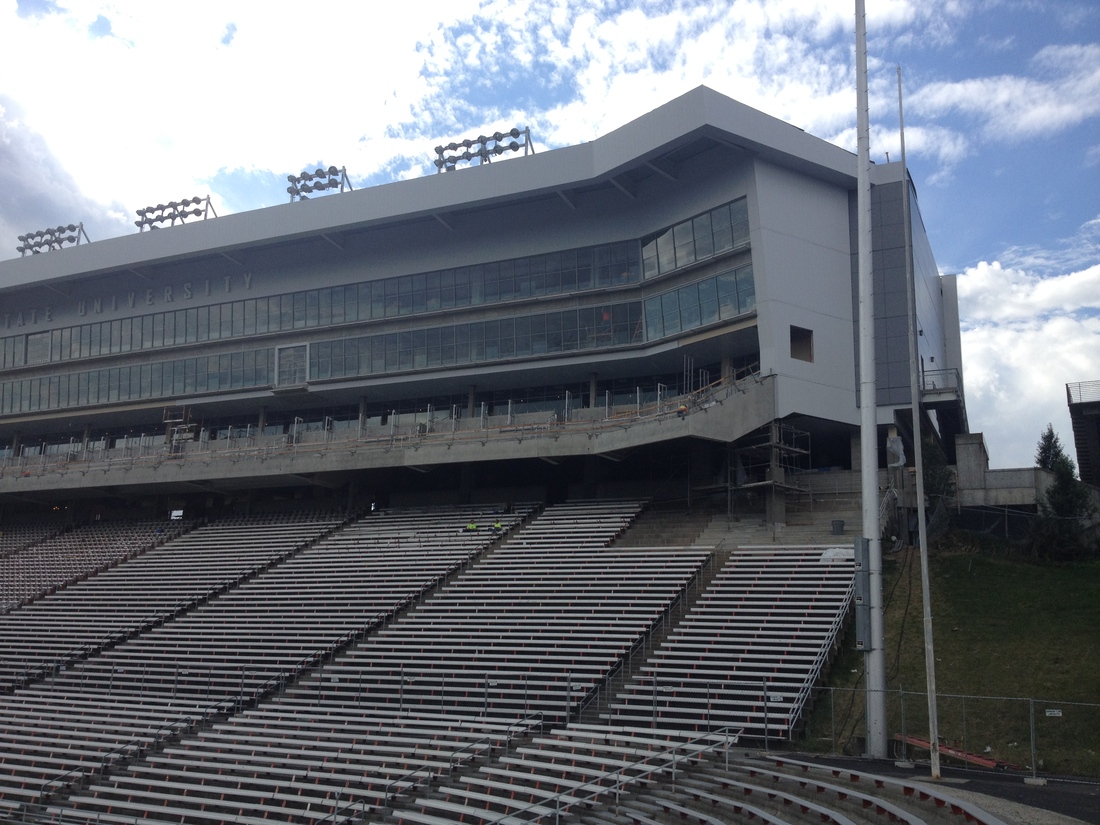 Same deal, looking down the length of the structure. 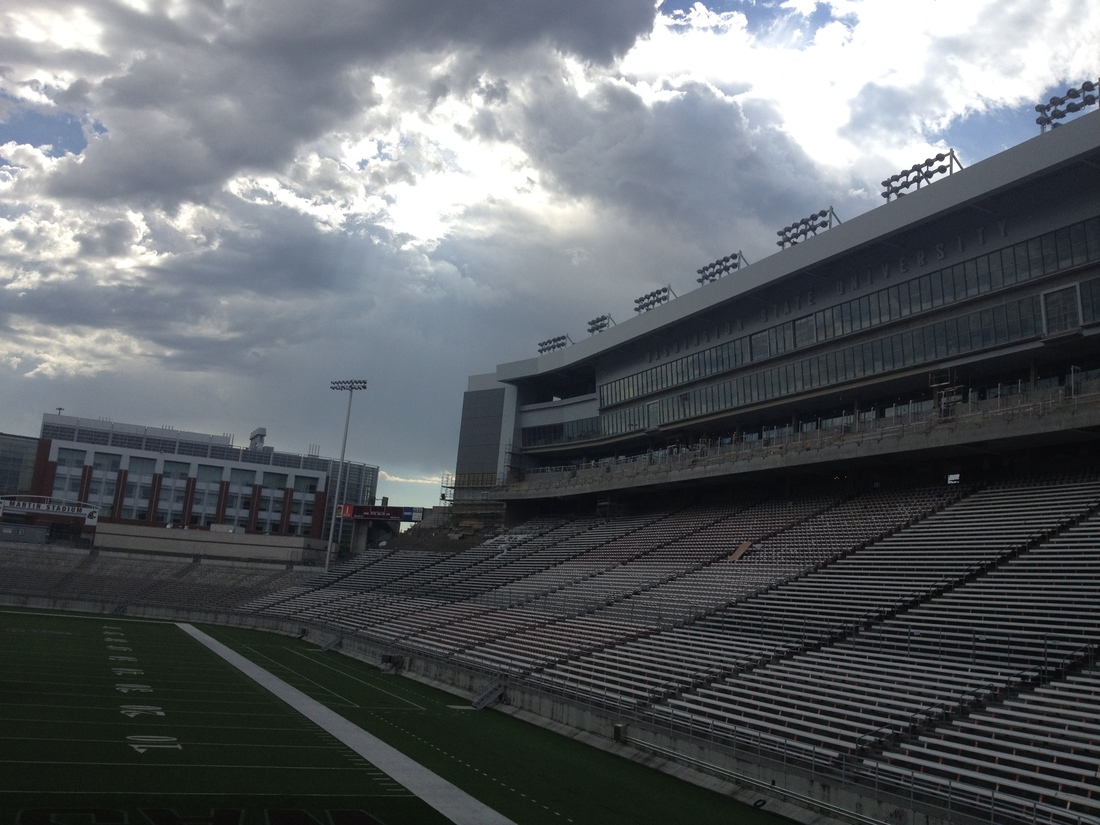 And looking straight at it. 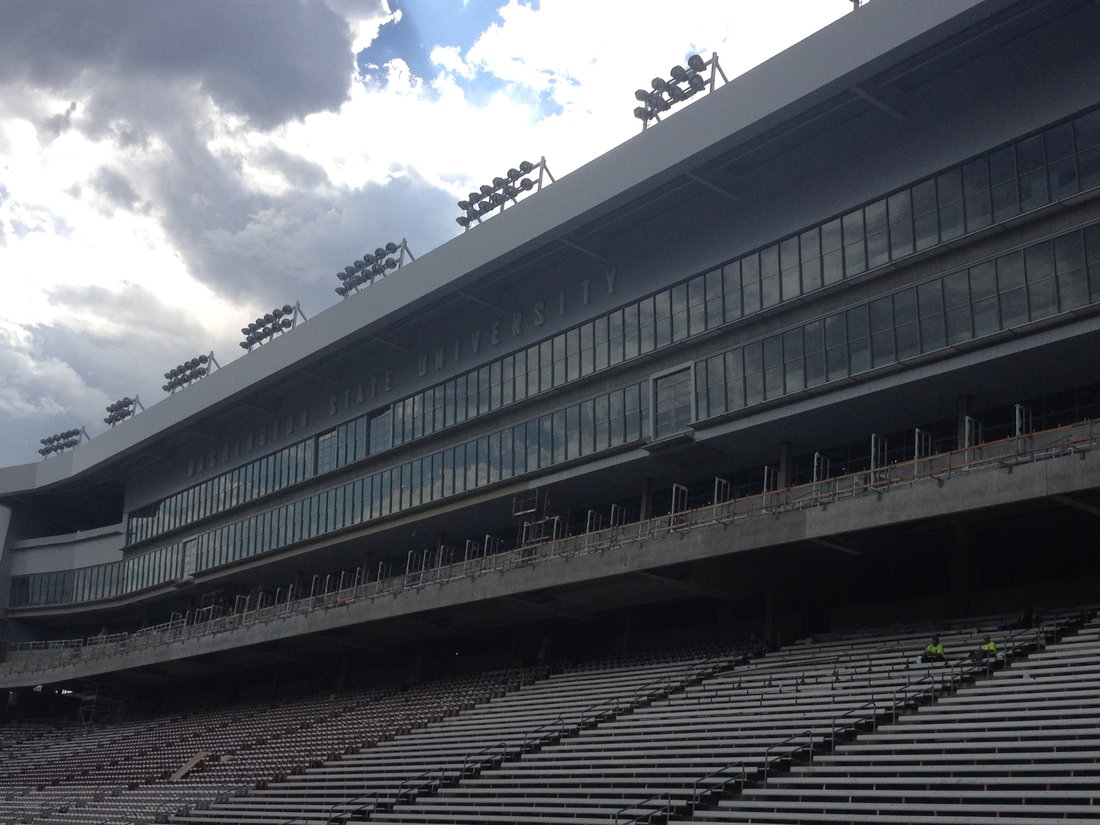 A similar angle from a little bit back, looking straight at it. 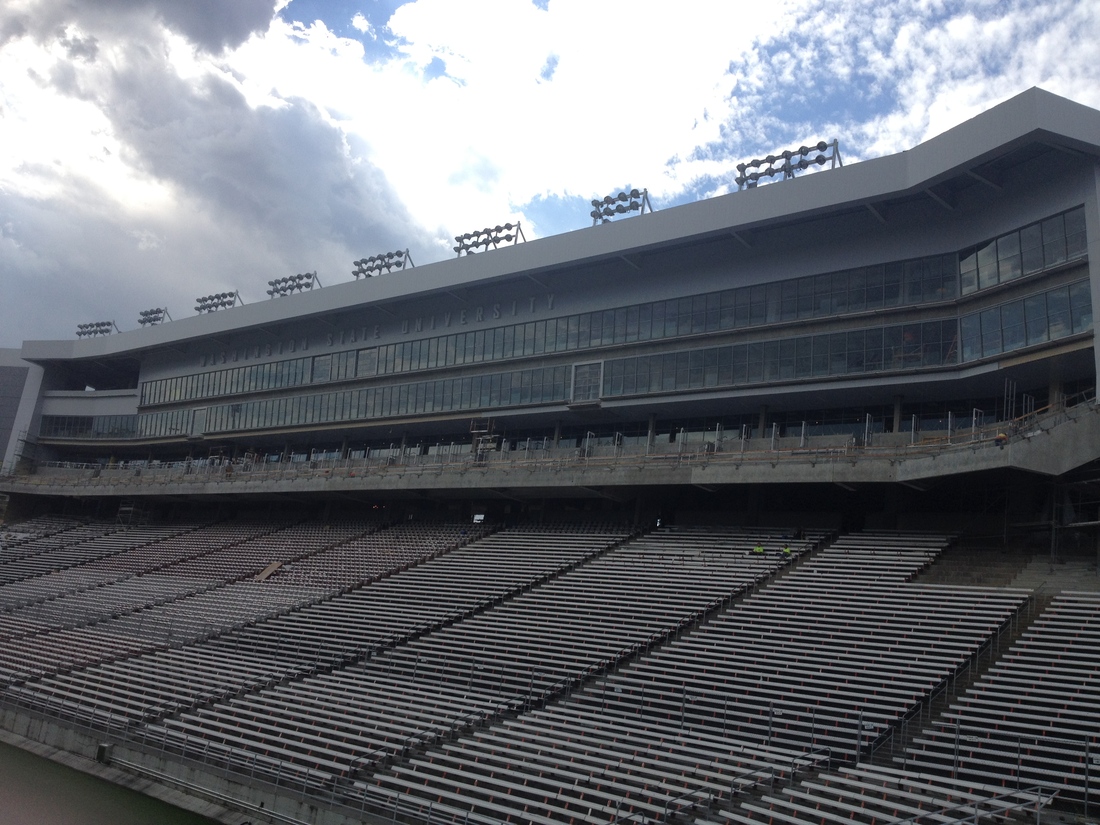 And for comparison, here's a shot of the length of the structure with the building that used to tower over Martin Stadium in the background. 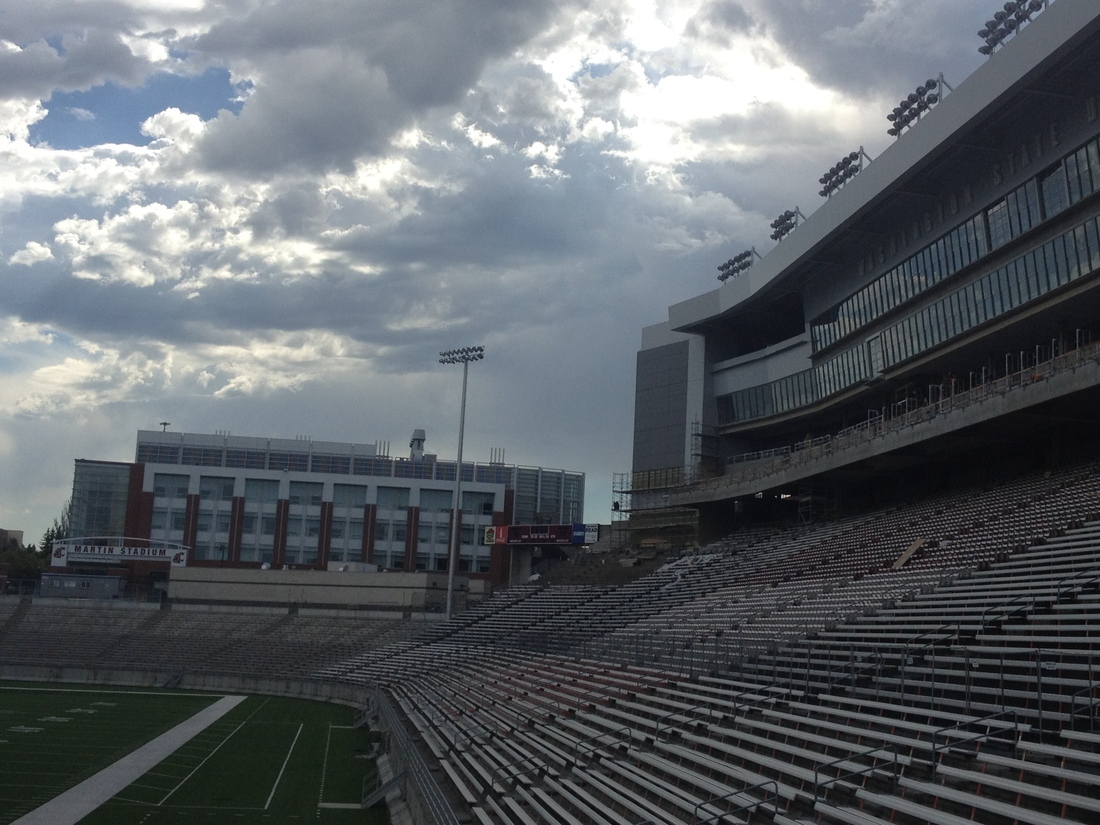 If you're wondering what the entrance side of it looks like, here you go! There's a ton of work being done on this side as it houses the construction entrance, but you can see the massive changes. 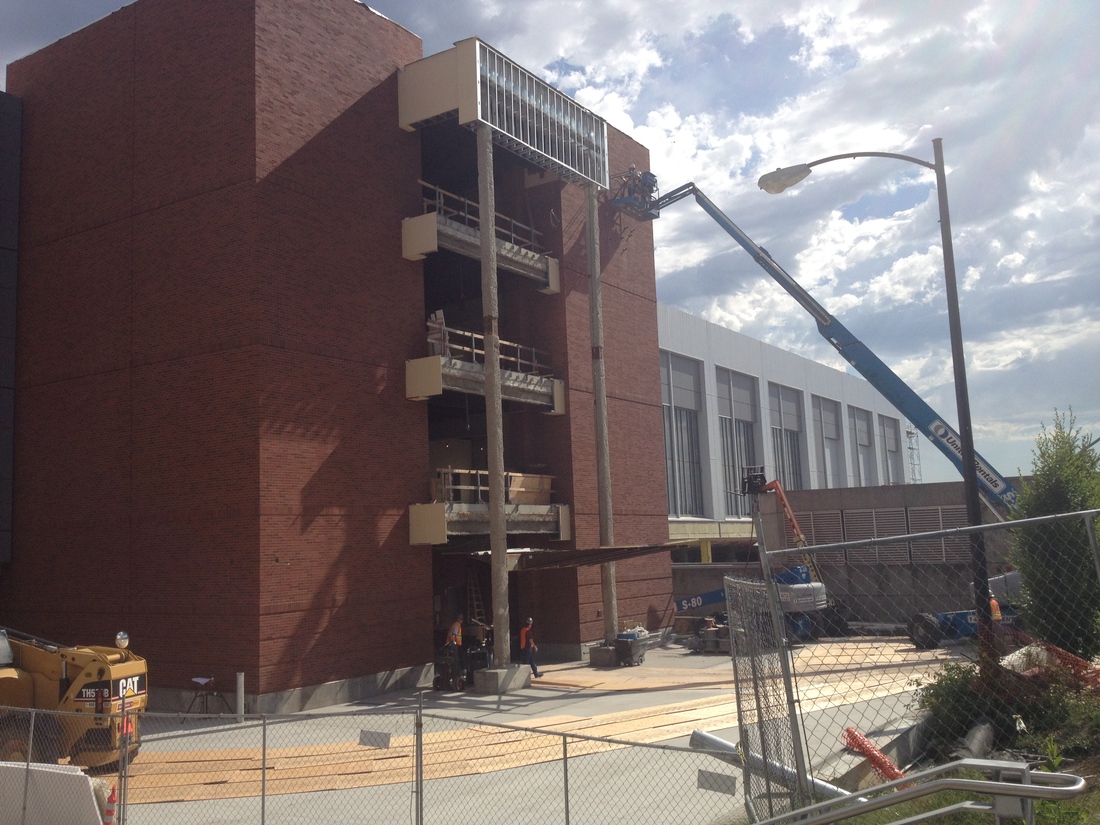 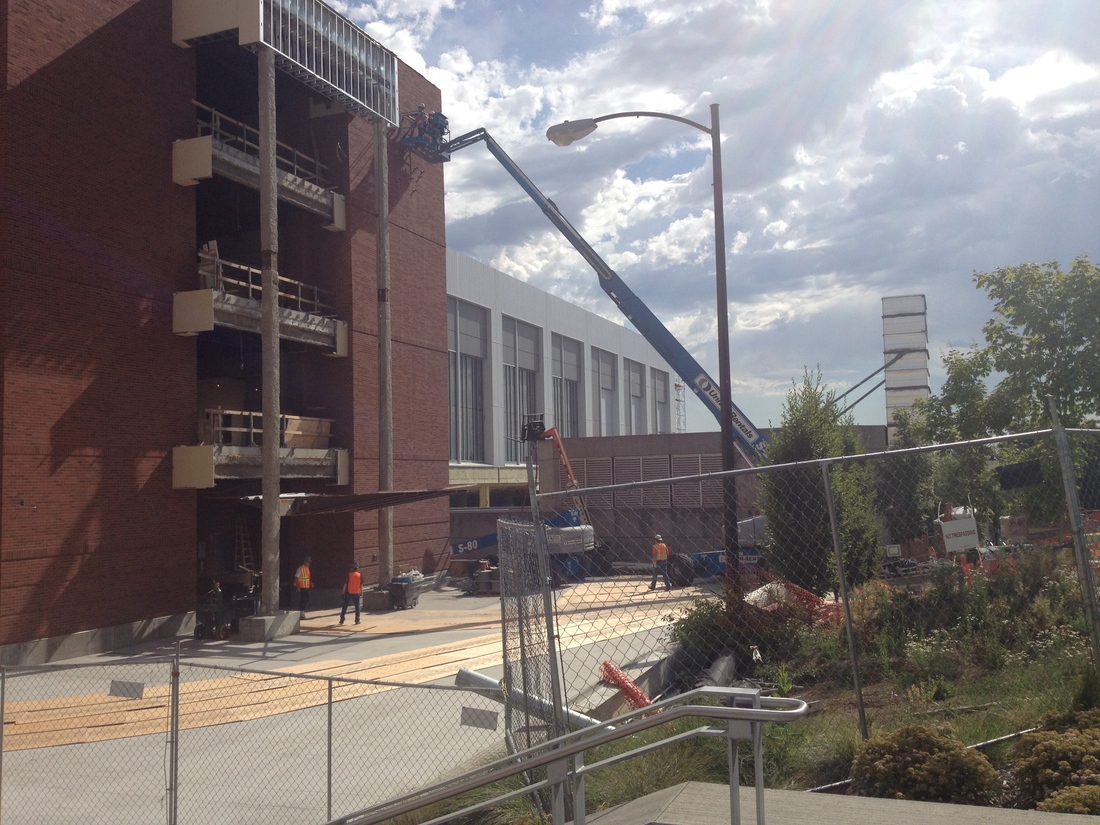 Right now, the project appears to be a skeleton, with a ton of interior work being done. The exterior, though, looks incredibly impressive, and crews are rapidly piecing together the inside now. The size of it all can't really be grasped until you see it in person, and it's somewhat of a shock to the system to see it.

The Cougar Football Project is set to open in September and those coming over for the Eastern Washington are in for a treat. If you haven't seen it in person yet, you're absolutely missing out. Photos just don't do it complete justice.