This is the best story of the day and, for my money, the best photos. On Friday, the New Orleans Saints unveiled 'Rebirth,' a statue located outside of the Superdome. It's a statue of Steve Gleason, flying through the air to block a punt.

The statue has been planned for quite some time, meant to commemorate Gleason's blocked punt early in the first game back at the Superdome following Hurricane Katrina. It was a moment that still gives me goosebumps; a moment that meant so much more than just football for New Orleans. You didn't have to be a fan of the Saints to get chills watching it.

And by now you all know about Gleason's new battle. He's fighting ALS, which has caused his health to rapidly decline. Still, through it all he's remained an inspiration, putting on a brave face and staying determined to live life to its fullest each day. He's one of ours, and he's one to be proud of.

Here's the statue, which is a fantastic work of art. 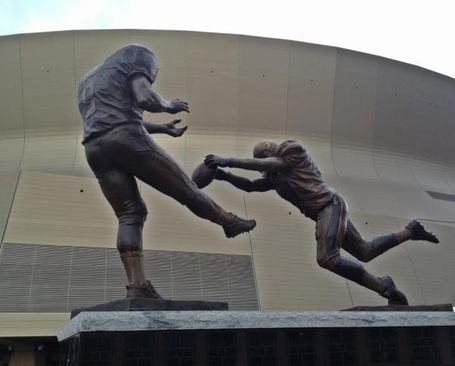 For more on Steve's battle, head on over to his website. No white flags.

Steve Gleason fights on against ALS