Single-game tickets for Washington State home games go on sale a week from today -- next Saturday at 10 a.m. This includes the Apple Cup, Seattle Game (to the public, not just presale) and the home-opener against Eastern Washington. You'll probably want to make plans to grab tickets now, if you don't have season tickets already.

There is something rather curious buried in the notes about each game. Take a look at the Cal game on Oct. 13. Notice anything ... interesting? 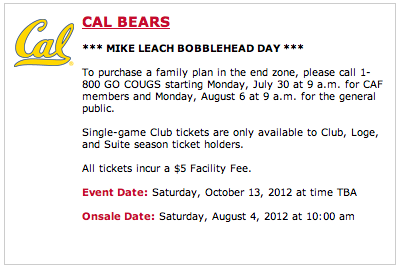 Why hello Mike Leach Bobblehead Day! We've got an idea of what this could look like.

Thanks to Mark, here's a quick mock-up of the Mike Leach bobblehead. It should go without saying that this is our own creation, but perhaps it'll end up being close to the real deal.

Now let's put bobblehead Mike Leach into action, shall we?

See? You want one of these. No, you need one of these. So go ahead and snatch up tickets when they go on sale. And while you're there, pick up tickets to the Seattle Game and as many matchups as you can get your hands on. You won't want to miss this season.