Goodbye And Thank You, Kathi Goertzen

Share All sharing options for: Goodbye And Thank You, Kathi Goertzen

I didn't know Kathi Goertzen personally, but it felt like I did. I mean, I had friends that knew her and was around people that called her a friend, but I didn't myself. But for as long as I can remember, my family would sit down and watch KOMO's evening news with Kathi and Dan Lewis. It was just what our family did -- always KOMO and always Kathi Goertzen.

Maybe it's the nature of broadcasting. Or maybe it was just her personality. Whatever it was, dinner always involved Kathi and the news. She became part of the household and part of my family's day. And she was damn good at her what she did, each and every night.

She was the trusted anchorwoman, and I don't use past-tense because of her passing, but because over time she became much more than a broadcaster and anchor, especially as she made her battle with brain tumors public. The whole news anchor thing became secondary, dwarfed by her courage and willingness to share her experiences as she fought a devastating disease.

Over time, her smile left -- not by choice but because of the tumors. They robbed her of the ability to make expressions and left part of her face drooping. It didn't matter one damn bit. She didn't care, and kept her sense of humor as she fought off a disease that just wouldn't go away.

For 14 years, she battled brain tumors. And for every single second, I thought she'd win the fight. She was courageous the whole time, and had a never give up attitude. The thought of her losing didn't cross my mind.

Even as news of a setback trickled out late last week -- sending Kathi to the ICU -- I figured she'd bounce right back. Because that's what she'd done so often. As quickly as the tumors would throw a punch, she'd punch right back with a haymaker. Then she'd triumphantly stand, arms flexed, and share her story. Because she was one hell of a fighter.

That's why the news of her passing on Monday was so surprising. I saw the tweet from KOMO and had to just stare at the screen, tears welling in my eyes. It didn't seem right, and it didn't seem fair.

I've seen nothing but kind words and sadness everywhere I've looked today. People leaving messages on Twitter, expressing sorrow. Commenters here sharing why Kathi Goertzen's passing hurts so much. Friends, acquaintances and strangers who only knew her from television sharing in the grieving process. There wasn't a soul that didn't love her.

Some of my favorite memories of her -- and things I'll remember forever -- came during Apple Cup week. There was Steve Pool, the Washington Husky, and Kathi Goertzen, the Washington State Cougar. Steve in his purple accents, Kathi decked out in crimson. She was proud of her alma mater and took every chance she could get to display that pride.

It was through her that I learned what the rivalry was really all about -- back when I was too young to know much about it at all. When she brought the band out to play the fight song, it all made sense. This was Apple Cup week. This was how good-natured ribbing was supposed to be.

At the 3:30 mark, you can see what I'm talking about. But watch the whole video.

Kathi was a Washington State Cougar through and through. She never hid it and let her biases be known. She was damn proud of her school and her degree, just as we all are. I was always proud of the fact that she was one of our own.

She shared the news with everyone in the greater Seattle area each night, and then shared her own story, being very frank with the details of her struggles. Her courage was always inspiring; a reminder to hug your loved ones and stay strong in the face of adversity. And for that, I thank her.

This one ... well, it hurts a lot. More than I expected it to. Today just isn't a good day, and the collective sadness her passing has brought is immeasurable. It says a lot about who she was that the reaction to her death has been so strong, so filled with sorrow.

She will be sorely missed by us all. Rest in peace, Kathi. Thoughts and prayers for her family, the KOMO team and everyone who was fortunate enough to have known such a wonderful person.

Here is KOMO's tribute to Kathi, which aired on Monday night. 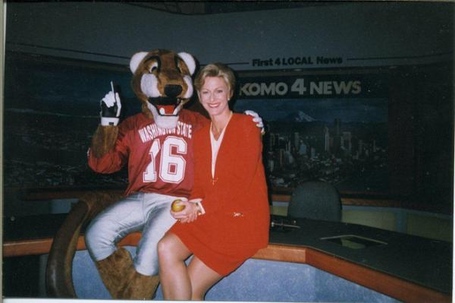