HOT COUGAR ACTION: Gabe Marks Is Awesome And We Have The GIF To Prove It

Share All sharing options for: HOT COUGAR ACTION: Gabe Marks Is Awesome And We Have The GIF To Prove It

Stop me if you've heard this somewhere before, but Gabe Marks is really good. How good? Well, considering WSU has an All-American wide receiver playing in Mike Leach's offense yet it's Marks, not Marquess Wilson who's been talked about more during fall camp, I'd say pretty good.

That isn't to say Marks is as good, or anywhere near as good as Wilson. Wilson is arguably the best wide receiver in the country. Instead, it's just a credit to how well Marks has performed in fall camp. He's consistently made plays, including yesterday when he turned a screen pass into a 70-yard touchdown. You can see the play in GIF form below (click to animate).

For those of you who have been around CougCenter for a few years, it may remind you of another GIF. This one from Wilson's freshman fall camp. 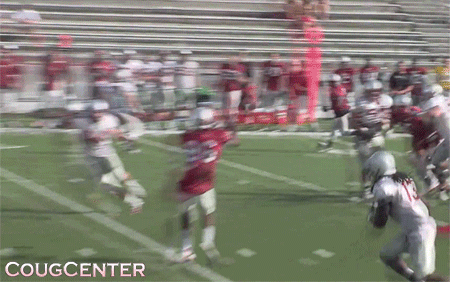 The common theme here? Both are really good and Nolan Washington is on the wrong side of a lot of GIFs.

Cougs scrimmage for a bit on Day 14 - SportsLink - Spokesman.com - Aug. 16, 2012
FROM PULLMAN — Washington State held its 14th practice of camp in Martin Stadium on Thursday. The reason? A scrimmage of about 36 or so plays, complete with officials and some pumped-in crowd music. Read on for some details.

WSU's defense feeling fine out of the spotlight " Kitsap Sun
PULLMAN — Texas Tech led the nation in passing six of the last eight years Mike Leach coached the Red Raiders, so it comes as no surprise that the offense has drawn most of the attention as Leach prepares for his first season at Washington State.

Cougars change tactics on defensive line - Spokesman.com - Aug. 16, 2012
PULLMAN – Matthew Bock is nothing if not observant. So this was the Washington State defensive lineman’s first assessment of Joe Salave’a, his new position coach: "He’s huge."

Chat: Chat with Ted Miller - SportsNation - ESPN
Realistically, how many wins do you think the Cougs get? And who's better long-term and right now, Marquess Wilson or Kasen Williams?

Kevin, where do you rank the WSU Receivers in the Pac-12, and how far are they from being the best? As a unit, they are in the top 5. Wilson makes them that good. I like the move of Rickey Galvin (story about that coming out tomorrow morning, by the way) and the connection between Tuel and Andrei Lintz looked really good in spring. It's a good group that should do well in the Air Raid.

WSU's Ricky Galvin warming up to new role - Pac-12 - ESPN
Two weeks from today, Washington State officially opens the Mike Leach era on national television at his alma mater -- BYU. Rickey Galvin is pretty sure he'll be on the field. He's just not exactly sure where.