Fall camp is officially underway at Washington State. The Cougars took to Rogers Field Thursday, for their first of 24 fall camp practices. We waited long enough for fall camp to arrive, so let's get right to the recap.

There were a few players absent, such as CB Spencer Waseem, DT Justin Clayton and WR Henry Eaddy, as well as incoming freshman WR Alex Jackson. No official reason was given for their absence, though Waseem, Clayton and Eaddy were all limited when spring ended.

Also on the injury front, Wade Jacobson, who has battled back issues throughout his WSU career, told Christian he feels the best he has since he was in high school. Jacobson said he went through the entire practice Thursday, a very good sign.

Player Of The Day:

Practicing without pads, it sounds like there wasn't much live action Thursday, but Nolan Washington intercepted Tuel twice during the 11-on-11 period, so he gets the nod today.

Picture Of The Day: 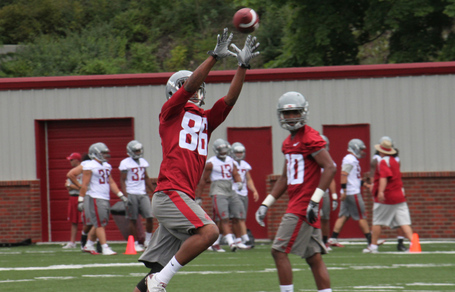 The Cougars will hold their second practice of fall camp at 2:45 p.m. PT.

That's all today, full practice recaps and other news can be found after the jump.

WSU finishes Day 1 of practice - SportsLink - Spokesman.com - Aug. 2, 2012
FROM PULLMAN — It was a very business-like day at Rogers Field, with the Cougars getting back into practice mode after a summer of workouts some described as the hardest of their lives. We have some notes for you after the jump.

Cougars take care of business at first practice - Spokesman.com - Aug. 2, 2012
PULLMAN – The honeymoon might not be over yet, but the bear hunting certainly is.

Video: Wade Jacobson - SportsLink - Spokesman.com - Aug. 2, 2012
FROM PULLMAN — We'll try to do one of these each day while we still can, and start today with senior offensive lineman Wade Jacobson.

Optimism, players run rampant as Cougars open practice | College Sports - The News Tribune
PULLMAN – The Washington State Cougars, like nearly every other college football team in the country, radiated optimism after the first day of practice. After all, everyone is still undefeated.

Chants hope Washington State transfer Kaleta can make big impact up front - Sports - MyrtleBeachOnline.com
It was announced earlier this week that Kaleta had joined the Chanticleers after securing his release from Washington State, where he started out on the defensive side before moving to right tackle, and now he finds himself in competition for the starting right guard job.

Cougs hope to turn Australia upside down | WSU Cougars - The News Tribune
The Washington State Cougars, who have taken a good share of basketball talent out of Australia in recent years, are taking their talents Down Under.