The Washington State football team was back on the practice field Friday for their second fall camp practice. According to Christian Caple on Twitter, new cornerback Raymond Ford has been added to the roster and watched practice Friday while incoming wide receiver Alex Jackson is expected to arrive on Saturday.

After saying he felt as good as he has since high school yesterday, Wade Jacobson was not at practice Friday.

OL Wade Jacobson not at practice today. Leach, as usual, said everyone is as healthy as can be, etc., when asked.

Player Of The Day:

Gabe Marks saw some action during team drills, an impressive feat for a freshman in his second practice. He also played well enough to earn some heavy praise from Mike Leach in the video below. Plays like this don't hurt.

Gabe Marks probably had the play of the day, hauling in a lengthy touchdown pass in the end zone over Deone Bucannon and Damante Horton.

Picture Of The Day: 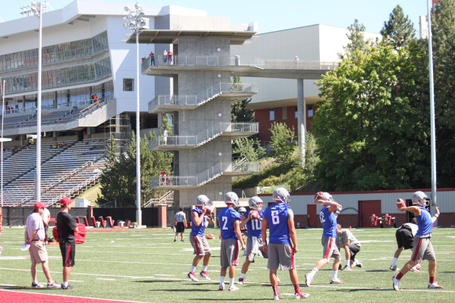 "We had good work in the summer because these young guys know the plays. I mean I expected to stop in-between plays, tell everybody what to do all this stuff, there wasn't a lot of that we could just call a play and run it." -- Mike Leach on the early performance of incoming freshman.

Another day, another 2:45 p.m. PT practice at Rogers Field.

I'll add in other videos and practice recaps as they become available.

Edit one: Added Christian's blog report from practice after the jump.

Edit two: Added Christian's story for the paper and the WSUCougars.com recap.

Day 2 in the books at WSU camp - SportsLink - Spokesman.com - Aug. 3, 2012
FROM PULLMAN — Another day, another practice in the books on Rogers Field, though this one was a bit warmer than Thursday's camp opener. It was also a big day for one of WSU's incoming freshmen. Read on.

Coug freshman Marks makes quick impression - Spokesman.com - Aug. 3, 2012
PULLMAN – The freshman brushed flecks of sand away from his body, a reminder of the workout he’d been given in Washington State’s new sand pit on the west end of Rogers Field after Friday’s second practice of preseason camp.