Share All sharing options for: HOT COUGAR ACTION: Fall Camp, It's A Celebration

Usually we run through the happenings of the previous day's fall camp practice in this post, but I thought I'd mix it up today.

Fall camp is much more than the play on the field. Sure the coaches are teaching technique and drilling plays, but fall camp is also the time to perfect celebrations. Both the coaches and players gave it their all Wednesday and we take a closer look at the results (click to animate).

We start out with Eric Oertel and Paul Volero executing a flying shoulder bump. Not bad, but coach Volero needs to get in the weight room and work on his vertical.

Next up, Travis Long does an excellent job of executing a hand shake. Really showed his veteran experience.

This GIF is my favorite. It occurred right after Tracy Clark (No. 27) broke up a pass intended for Marquess Wilson. Wilson is sitting on the turf as the celebration unfolds. He is then told what the play was and where he can take it. 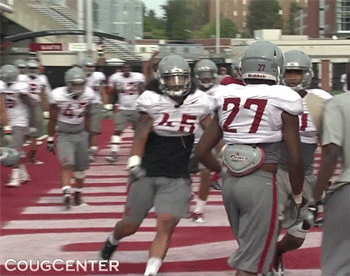 Clark makes a second appearance and this one doesn't go as well. After breaking up the final play of practice, Clark looks for someone to celebrate with. He goes for a flying chest bump and gets excellent elevation, but there is a clear miscommunication and no one is there to meet him. There is a late attempt at a high five, but that also misses. They need to get that worked out before BYU.

WSU linebacker Mayes bulks up - Spokesman.com - Aug. 8, 2012
PULLMAN – So you take some peanut butter, Logan Mayes said, and some Ensure, some protein powder, some yogurt, some Carnation instant breakfast and a little bit of milk.

2012 POSITION PREVIEW: Inside Wide Receivers - The Washington State University Official Athletic Site
The addition of inside wide receiver positions has created opportunities for a couple veterans who return looking to produce for the new look Cougar offense.

The Mike Leach bobblehead is now a reality, but not easily attainable | Dr. Saturday - Yahoo! Sports
Washington State is trying to cash in on the popularity of new head coach Mike Leach by offering the first 10,000 fans at the Cougars' game against Cal on Oct. 13 their very own Mike Leach bobblehead. Yes, this is really happening.