Share All sharing options for: WSU Vs. EWU: Using (And Misusing) Space In Mike Leach's Offense

If you're like me, as soon as the Mike Leach hire was announced you wanted to learn everything about the Air Raid offense he would be operating in Pullman. A great starting point is the Air Raid Opus written by Chris Brown of Smart Football, which you can find here. If you missed out on it the first time around Chris Brown has an excellent post filled with Air Raid related links. These are great references if you're just starting to get into the X's and O's of football, or aren't as familiar with the Air Raid concepts as you'd like to be.

The Washington State iteration of the Air Raid has yet to deliver on the hype on which it rode into the season. Expectations were very high coming off a strong showing in the spring game, and the Cougars are still striving to translate what they are capable of in practice to game day production.

What needs to improve? Coach Leach has frequently emphasized "space," and how the Cougs need to do a better job at taking advantage of it. But was does that mean exactly? In order for the offense to be successful, WSU needs to deliver accurate and timely balls to receivers in open pockets of a defense. "Throw to the open man" sounds simple enough, but that space can take time to develop and will vary with what the defense does on any given play. You'll notice in the Air Raid schemes, most routes have the flexibility to adjust downfield (all the arrows pointing off a route are potential changes in direction); Tuel and his receiver need to anticipate the exact same adjustment.

We have two examples from Saturday's game against Eastern that do a good job illustrating both a negative and positive adjustment to the open space on the field.

Unfortunately Brett Bartolone is our negative example this week. When faced with a 3rd and 15, WSU fails to convert and this play ends the first drive. The Cougs break huddle in 10 personnel, and line up in a doubles formation with the X and H at the top of the screen and the Y and Z at the bottom -- referred to as Ace in Leach's offense. Our play call is essentially a Y-Cross (you'll notice how the H moves out of the backfield). 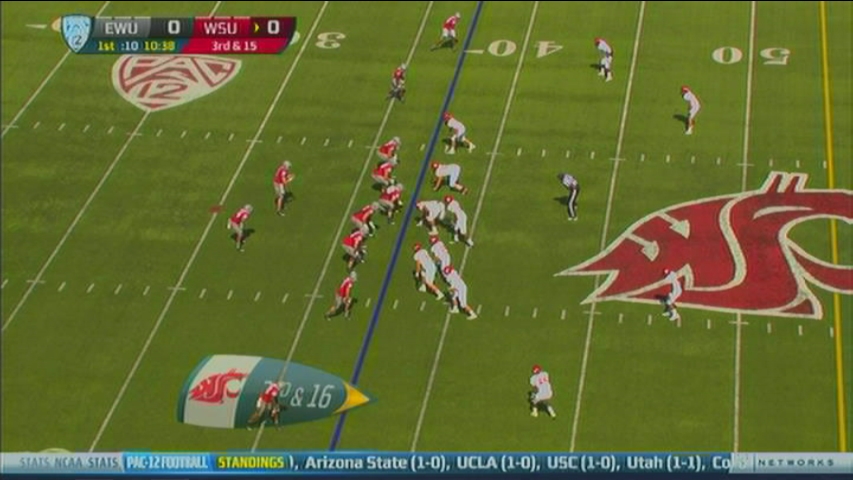 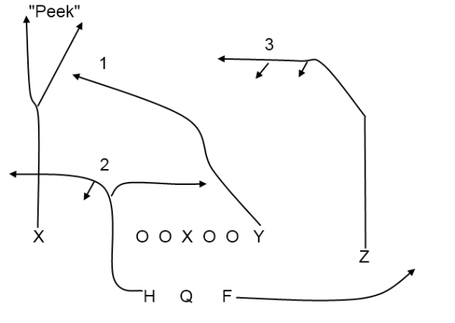 In this, Y is the primary and Tuel has the freedom to go to X if he likes what he sees. When approaching a pre-snap read of the defense, the corners are a good starting point. Corner position can tell you a lot about what the secondary will be trying to do. Here, EWU corners are facing into the backfield, indicative of zone, and are around 5-6 yards off the line of scrimmage. This is a cover 2 alignment. In cover 2, corners have responsibility for the flats (5-10 yards on the sideline), and each safety is responsible for a deep half of the field. The safeties are on their hashes (with a little respect given to Marquess Wilson) likely confirming a cover 2. Expect them to back pedal hard at the snap, angling toward the sideline.

The next and most obvious read is on the front 7. Here EWU is showing blitz, which would actually be a really good thing for this play call if they'd done it. Blitzing linebackers will leave space where they would otherwise be defending, which is why you typically hear about wanting to throw at a blitz. Behind a blitz is where the space is on the field. For this play, Y would be filling that space immediately with a trailing backer and after a quick catch could be one on one with a safety 10 yards downfield. At the snap, EWU only rushes 3, and 4 backers begin to settle in their underneath zones. During his initial drop, Tuel eyes Y first, looking for that blitz opportunity and recognizes who is rushing. Y is covered by 2 dropping backers. At the top of his drop, he "peeks" in on X. 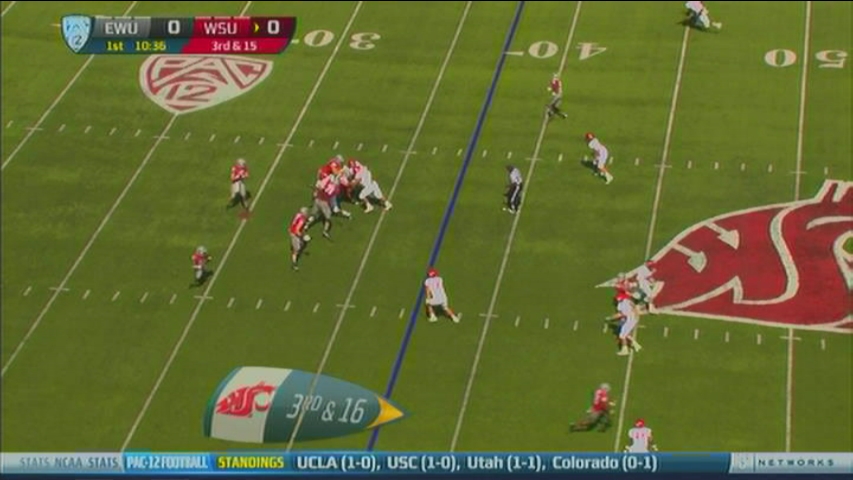 The corner got a good jam on Wilson (although he loses outside leverage) and the safety is now 15 yards off the ball and over the top. Nothing about Wilson's position screams wide open here. Tuel slides in the pocket to gain time and picks up Y coming across the middle. At this point, the safeties are about 25 yards downfield, the corners are at 10 and Y has gotten behind the dropping backers. Tuel pulls the trigger as the Y is in open space. 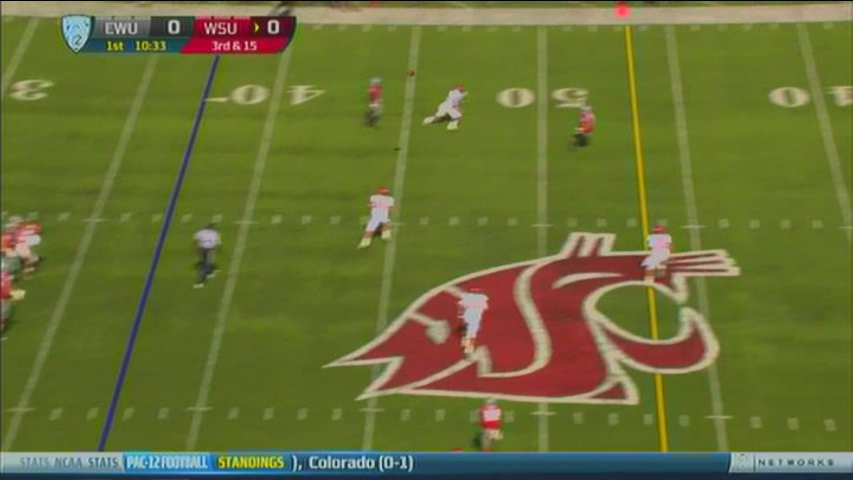 At first glance in real time, the throw looks inaccurate and it could've been. But there could be a little more to this. Ideally, Tuel would have the Y throttle down in the open space, exactly where he threw it. Instead, Y runs through the window and continues toward the sideline. If Tuel would've tried to lead him, he needed to place a ball over a corner that had good sideline position and closing speed. This is a significantly more difficult and risky throw considering how long the ball would be in the air.

Recognizing space is a task for the wide receiver and quarterback; without both on the same page, WSU have missed opportunities like this one.

But when they are on the same page, awesome things can happen. Our next example is of Marquess Wilson because what's a good example without a preseason All-American? WSU faces a 3rd and 1, lining up in a slot formation where the X and Y are brought in tight. Eastern's corners and safeties again show a pre-snap cover 2 look, with the outside backer splitting the distance between the inside receiver and the last man on the line of scrimmage. The play call is a variation of the "H-snag" concept. 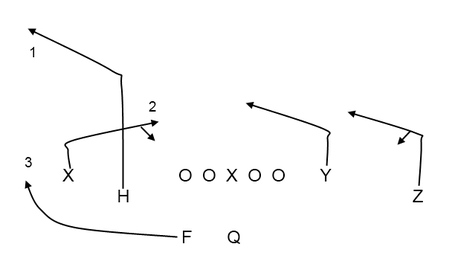 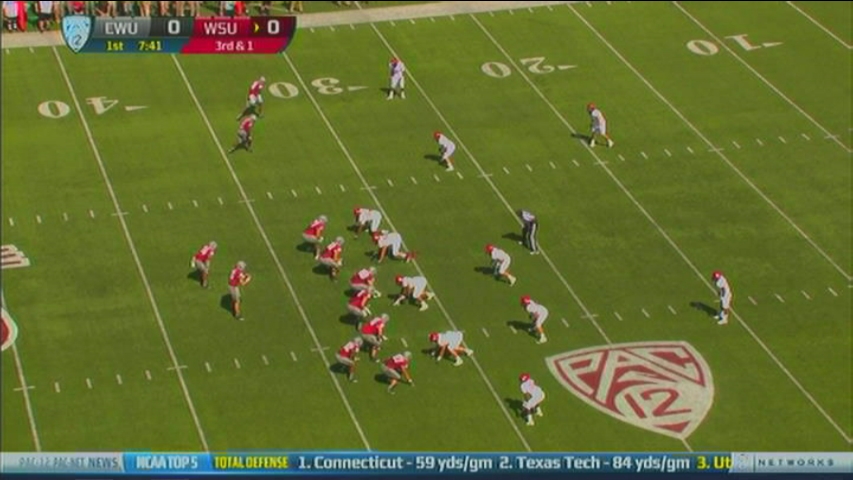 X and H are running complementary routes. Alone, there's nothing particularly special about either route. You don't need to be able to execute double moves that break ankles, or have 4.3 speed. But when these are run in tandem, they force a decision on the defender. A defender will be responsible for two receivers and must choose one to pass off. This particular complementary package forces a cornerback to choose which vertical space to defend.

The ball is snapped and Wilson at X curls just past the first down marker -- this looks like it was designed to hit him quickly for a first down. For whatever reason, Tuel doesn't like that option. It could be he wasn't comfortable with the corner coverage, the passing lane he liked was obstructed (either by a defensive lineman, or the RB leaking out) or he didn't feel pressure and wanted to let the play develop. His eyes were on this side of the field the entire time. As H moves on his corner route past X, a few things begin to happen all at once. 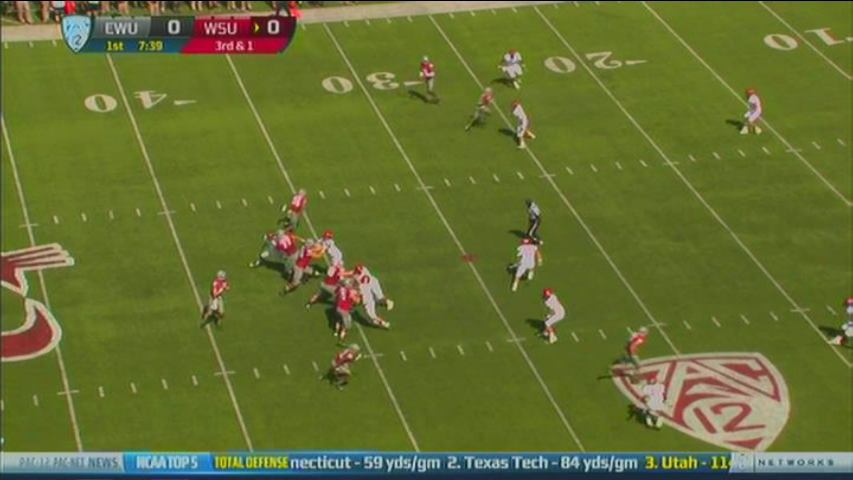 First, the corner opens his hips and decides to pick up H, passing responsibility of Wilson to the outside backer. (It is probably not a good idea to let Marquess Wilson be covered by an outside backer). The backer sees the running back leak out towards the flat, which is now his responsibility. The backer is forced into a choice and he hesitates; does he leave his even position with X to close on a check down he knows Tuel likes to target (keep in mind it is 3rd and 1)? 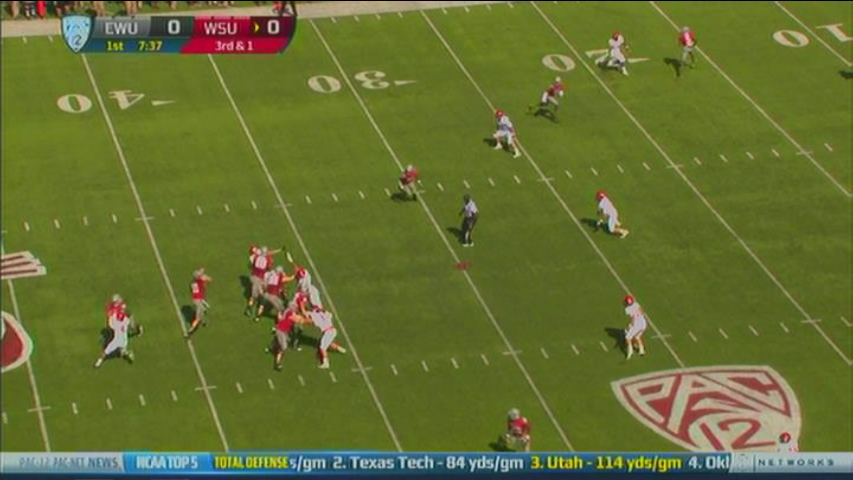 Wilson exploits this mismatch almost immediately. The cover 2 safeties have taken their normal drops and are 20 yards off the line of scrimmage. When you aren't attacking a corner in cover 2, as was the case because of how this play was designed, you can attack the centerfield space vacated by dropping safeties. Wilson streaks toward this space on a modified post route. The backer is still frozen by his coverage responsibility and Tuel delivers the ball in stride (a little high if you're picky), just as Wilson enters the window. This whole play developed and the ball was out in under 3 seconds.

Both Tuel and Wilson recognized the same space as the play developed and exploited it quickly. By watching a route evolution and common adjustment like this, we can appreciate how these things can take time. Game experience and tough film study will go a long way, and WSU should improve every week. Have the Cougs taken to the Air Raid as quickly as some of Coach Leach's previous stops? Not yet, perhaps. But this season is very young and we are yet to see the ceiling of what these guys are capable of. WSU is very close to being able to execute these types of adjustments with regularity, and will need to in order for the offense to be successful.