WSU vs. Colorado: It was only a matter of time

Share All sharing options for: WSU vs. Colorado: It was only a matter of time

You cannot let a bad football team hang around while coasting, failing to close out a game. Washington State did it against Eastern and came within a fingertip of losing. The Cougars did it again against UNLV, and very nearly fell apart in the fourth quarter. It was only a matter of time before they got bit in the ass. 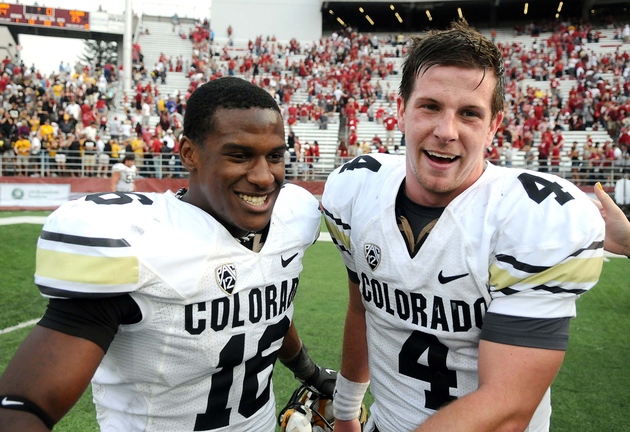 This team's fatal flaw is not its talent -- not solely. Are the players on the roster All-Americans and world-beaters? No, certainly not. But they're talented enough to put away poor teams -- teams they're rightfully expected to beat. And yet, they can't.

Washington State had Colorado on the ropes for most of the game. The Cougars were clearly the superior team. But as the game clock wound down in the fourth quarter, the party just seemed to start early. It had a feel of "We've got this. They can't handle us." There was, as Daniel Simmons mentioned, a sense of complacency.

Washington State isn't good enough to coast. Up 17 with eight minutes to go, the Cougars had no business relaxing and planning the victory celebration. This isn't a guess or conjecture, either: player after player came into the interview room after the game and admitted there was complacency, a sort of "We're up 17; there's no way Colorado can come back" mood.

The result was a mental error that led to a 70-yard Colorado touchdown pass, and a lead that shrunk to 10. A few minutes later, the Buffaloes gashed Washington State again for an 84-yard touchdown run. Two and a half minutes, 14 points, and a lead that was, for all intents and purposes, gone. That's how quickly it can all go up in flames.

Taking one play -- even a split-second -- off is unacceptable. It just can't happen. And so far, it's happened in each and every game. BYU may have already been manhandling Washington State, but the coaches were quick to point out how the team moped. The Eastern Washington and UNLV games followed the same script: Take control, engage cruise control, escape with a win. And for the third-straight week, the Cougars flat let up. This time, they paid for it.

Think about how many times Washington State has had to actually close a game recently. Arizona State last season? Oregon State the year before? Not games where the Cougars have had to scratch and claw back like an underdog. Games where they've held a lead and have to finish it off late.

It's one thing to play the role of underdog and keep fighting until the end -- something the Cougars are familiar with. It's another to take and keep control, burying an opponent and ensuring they can't get back up after being knocked down.

This team -- these players -- just don't seem to have a clue how to go for the jugular and finish. There have been plenty of opportunities over the past three weeks, and it feels like each opportunity is squandered, be it by a turnover, a miscue or, as Connor Halliday said, stupid plays. It's absolutely maddening.

Maybe the loss to Colorado will serve as a wakeup call. It's a wakeup call, however, that Washington State shouldn't have needed. When finally given the chance to put away opponents, there's no excuse for not taking it. It makes no sense at all.