Pac-12 Odds: Picking against the spread for Week 5

Share All sharing options for: Pac-12 Odds: Picking against the spread for Week 5

It takes at least a catastrophe or two to flip a coin five times and get it wrong in all five. For those of you procrastinating at work today, go ahead and try and see how long it takes you to be wrong five times in a row. It’s a lot better story for why you got fired than reading too much Cougcenter.

Not that this makes my spectacular failure any better, but while writing up my picks last week, I actually picked Colorado. Not to win, mind you, but I didn’t think WSU could beat anyone by three touchdowns. So when I was about to publish my picks, Nusser sends me a video from the national SB Nation guys that he wants me to include in my column. The national guys picked WSU to win handily. Now I’m faced with not believing in my team more than a guy who hasn’t watched more than eight minutes of the Cougs this year, and if the Cougs win by 25, I’m going to look like twice the jackass I already do.

My column was already late and I didn’t want to rewrite the paragraph, so I just flipped the pick and threw this at the end, and I find it fitting:

But if there’s one thing you should know about me, is that I never learn my lesson on anything. Take the Cougs and give the points.

So yes, going 0-5 takes a catastrophe of some sort to pull off, and this week it was switching my Coug pick so I could look like a bigger Coug homer than someone who couldn’t find Pullman on a map of Whitman County.

To add insult to injury, I get this tweet from Nusser during the game:

@bigwoodwsu Please tell me you didn't bet on the Cougs.

On to the picks: 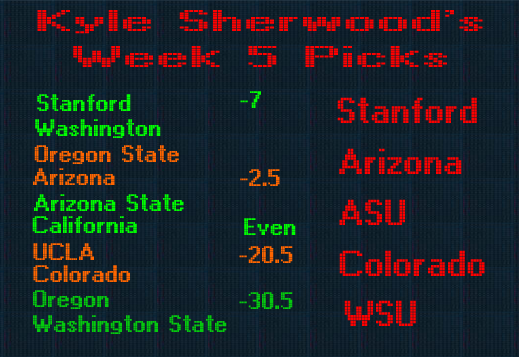 OREGON (-30.5) vs. WASHINGTON STATE (neutral site): It’s time to believe! Believe the Cougs can cover a 30+ point spread! Since this game will be 50/50 Cougs and Ducks, this will probably be the closest WSU gets to a bowl game environment so look for the Cougs to play like it. The Washington schools are a combined 0-5 ATS so far this season and will probably be 0-6 by Saturday (spoiler!), so it’s time for the Cougs to put on their man-pants and lose this game by 29! Come on Cougs, we know you have it in you! More exclamation points! Take the Cougs and the points.

STANFORD (-7) @ WASHINGTON: Tonight marks the annual event where Husky fans admit to themselves they really hate wearing purple in public have their Black jersey/Black T-shirt night. Not one of those black jerseys comes equipped with technology to make a tackle within five yards of the line of scrimmage, sadly. That is technology that someone from Stanford will invent; probably by halftime. Take the Trees, give the points.

UCLA (-20.5) @ COLORADO: UCLA heads into the house of the FIRST PLACE COLORADO BUFFALOES on Saturday hoping to move their way up in the standings. Obviously Colorado will protect their house….and only lose by 17 or so. I like the Buffs to barely cover here. There’s a pun in there somewhere.

ARIZONA STATE (E) @ CALIFORNIA: If you don’t count the last minute 3 point spread swing against Missouri, ASU is now 4-0 ATS (ie: if you bet on ASU on Fridays, you haven’t lost yet). Over the last three years when Cal gets killed by USC, they bounce back and beat the team next week by three touchdowns. So something has to give here. I’m still very bullish on ASU this year and will atone for picking against them last week. Take the Devils from here on until they let you down.

OREGON STATE (+2.5) @ARIZONA: Anybody comfortable with picking the Beavs yet? Me either. I’ve already had to apologize to my OS friends for threatening to jump ship to their school and bringing years and years of horrible karma with me. To make it up to them, I will continue to pick against them to wish them luck. The kneejerk reaction "lock of the week" logic points to taking the Beavs this week, but four weeks in, that lock is now 0-4. Learning my lessons, I’m taking the Wildcats and giving the points.

Here’s hoping none of you ever have to experience an 0-5 week. So good luck to all of you and may your picks bring you a small fortune, provided you didn’t start with a big one.