About The Authors: Neil Stover

Share All sharing options for: About The Authors: Neil Stover

Like any author worth their weight in bling, I tend to get all of my inspiration for writing from worldly philosophers. So in the poetic words of the great intellectual Jay-Z, allow me to re-introduce myself: My name is Neil.

Ok, I promise I'll leave the rap lyrics out of my writing. Probably. I'm sure many of you know me, but I doubt many of you actually know me. For those who have been around here awhile, you probably know I was a men's basketball manager at WSU the past five years - four years of which as an equipment manager and two as the head manager (meaning I traveled with the team on all road trips and led our group of volunteer managers).

Much to my chagrin at the time, my friend, Jeff Landrie, started the "Neil Stover Fan Club" about three years ago. It probably would have died off fairly quickly if it weren't for the fact I am unfathomably easy to embarrass. Having the natural propensity to turn shades of red most people didn't even know existed provided all the ammunition Jeff needed to not only keep the group alive, but also expand it. As time wore on, giant cardboard cutouts of my wildly unattractive face began to appear and people took notice of who I was, including the authors of this fine website. Relationships, and ultimately friendships, were born from late-night Twitter banter that helped change the course of my future.

After five near-perfect years at Wazzu, the depressing reality began to creep in that there was, in fact, life after college. With the help of Brian's #HireNeilStover campaign on Twitter, I was fortunate enough to land a job down here in San Francisco at the new Pac-12 Networks. While leaving the Northwest has had its fair share of drawbacks, the opportunity to launch the Networks and be part of such a historic operation has been the experience of a lifetime.

And now here's another. Brian recently approached me about the idea of writing for CougCenter after one of my current roommates and former Arizona State defensive tackle, Bo Moos (yes, the son of our fearless leader, Bill), began writing for House of Sparky. After ensuring I'd be able to steer clear of controversial topics and conflicts of interests, I jumped at the idea of writing for my favorite site.

So now that you understand how I got here, let me tell you a bit about who I actually am. Most importantly, I was born and raised a Coug; my parents both attended (and met each other) at WSU, and my only brother migrated to little ol' Pullman for the four years preceding my five. Basically what I'm saying is this: to say we're a perfect family wouldn't be altogether untrue.

My Coug fandom aside, sports have always played a crucial role in my life. Ever since Dave Niehaus' call of The Double in the '95 ALDS, my career focus has been locked in on sports broadcasting. While most kids harbored dreams of being an astronaut or professional baseball player, I aimed to be the one who told the tearjerker story or called the play that still triggers goosebumps several years later. My dad frequently reminisces that as every other kid was watching Sesame Street and Power Rangers, I scrutinized repeat after repeat of SportsCenter.

If you follow me on Twitter- first of all, I'm sorry- you know my passion for the Mariners runs deep. Despite their recent (as in decade-long) struggles, I watch and analyze the M's religiously. Last summer, my love for the Mariners coupled with my drive for sports broadcasting culminated in an internship at ROOT Sports that allowed me to work with the broadcast team for every home game. If possible, that opportunity drove my obsession for the team to a whole new level. Given all this, I deem it necessary to offer this one caveat: unless you want to see my constant ramblings about my undying affection for Kyle Seager (which started way before everyone else's, by the way) or my disdain for a certain utility "player" who spells his own name wrong, I suggest you refrain from following @neilstover.

Growing up in Issaquah also cursed me with the fandom of Seattle's other professional sports teams. The Seahawks and Sonics both served as integral parts of my sports addiction. I can't tell you how many times I've semi-jokingly blamed my parents for raising me in such a futile sports environment, but at the end of the day, these teams are my lifeblood. But be forewarned: if I'm a fan of your favorite team(s), you should probably just concede right now your team is never going to win anything - except the Cougs, of course!

I swear I have non-sports interests as well, and I could go on and on about what makes me me, but I sense there's no rhyme or rhythm to what I'm writing anymore. In short, it's an honor to be part of this incredible team of talented journalists. I hope I can provide you all with some valuable insight. I've been blessed with opportunity after opportunity in my life, and I think it's about time I give back to Cougar Nation for drastically helping me get to where I am today. Go Cougs! 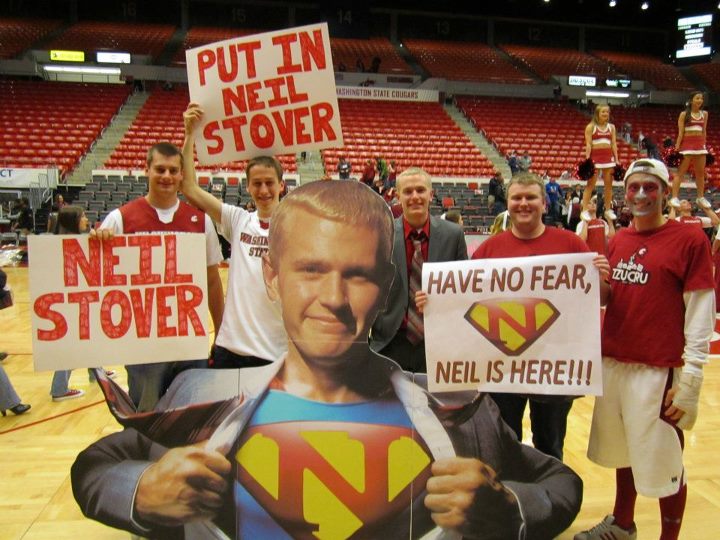