It's been a long time, but WSU and UW will finally meet as winning teams this year. We look back at some of the most memorable moments in the 34 previous editions where both teams had more wins than losses.

All these have been on the line in the Apple Cup for both teams. On Friday, when Washington State visits Washington, aspirations that high won't be on the table, but for the 35th time in the history of the rivalry, both schools will enter the match-up with winning records. 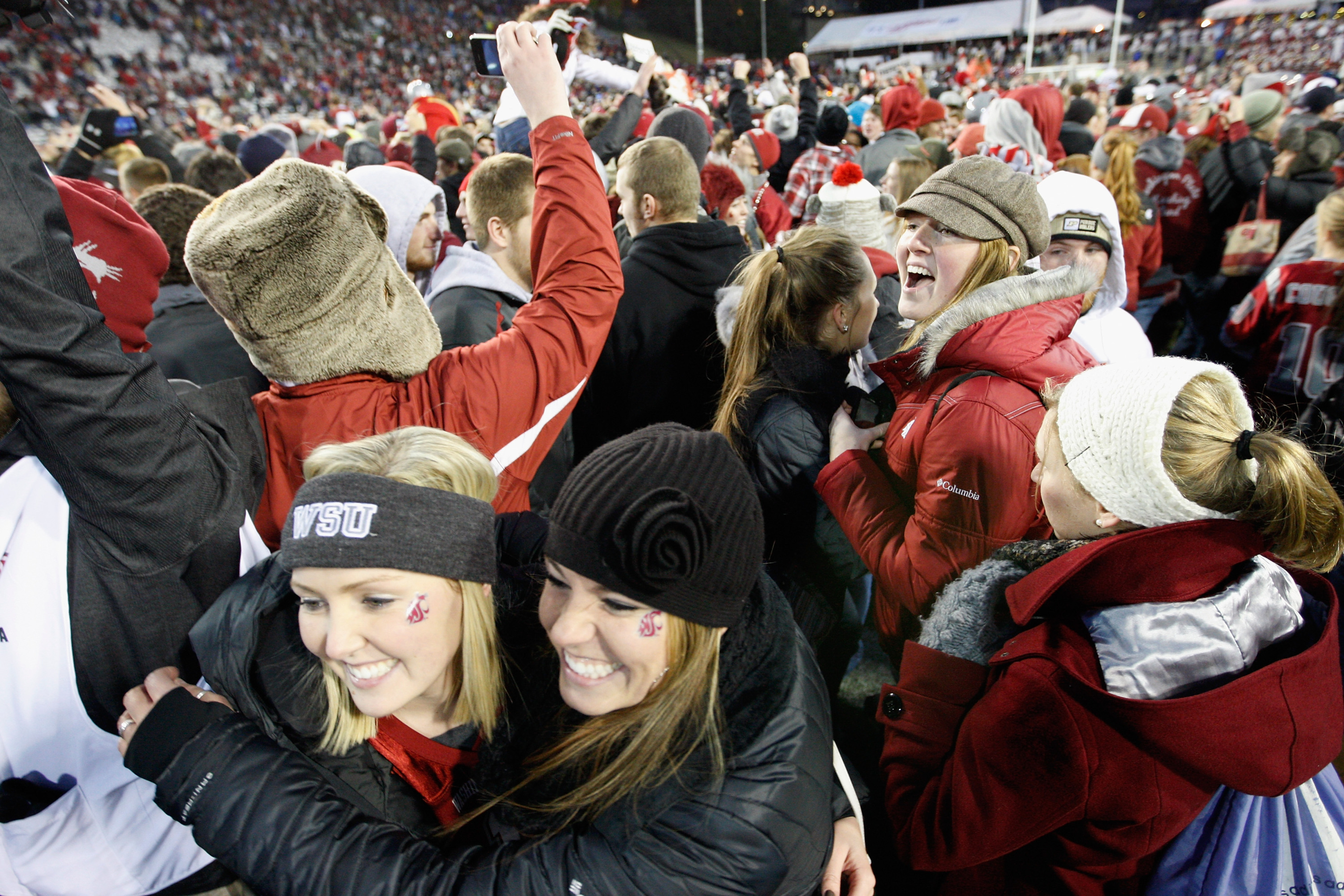 WSU Libraries has compiled a complete archive of Apple Cups past.

That means two winning teams have met in this cross-state series about 3 to 4 times a decade. That has not been the case recently; it has been 11 years since UW and WSU both came into the Apple Cup on the positive side of the ledger.

UW holds a decisive edge in the overall series, and the same can be said for when both teams enter the Apple Cup with more wins than losses. Washington has won 19 of the 34 contests, with WSU grabbing 11 wins and the two programs playing to four ties.

With most Apple Cups historically played at the end of the season, especially since World War II, the rivalry game has held some major stakes, as mentioned above. There have been the highest of highs and the lowest of lows for both teams.

Let's take a look at some of the most notable results in these 34 winning tilts.

Despite a disappointing 5-4 loss to Idaho in the previous week, Washington State College came into the 1907 meeting with the University of Washington at 4-1, including dominating shutout wins over Eastern Washington, Montana, Blair Business College and the Spokane Air Command.

UW was looking to snap a three-game losing streak. The Huskies started the season 4-0-1, with wins over Willamette, Whitworth, the Multanomah Athletic Club and a tie with Seattle High School. The meat of Washington's schedule was not as kind, as the losing starting with a 19-6 defeat at the hands of the USS Nebraska.

As many Apple Cups have, the game came down to the closing minutes. Tied at 5-5, WSC was able to matriculate the ball down the field on a series of "straight-line plunges" and grab the winning touchdown with just five minutes remaining. Touchdowns were worth five points then, and WSC came away with a 10-5 road win.

WSC would go on to finish the season at 7-1, while UW stumbled down the stretch to finish 4-4-2.

Both Washington State and Washington arrived at their 1908 match-up without a loss or a tie. WSC had yet to allow a point in defeating the likes of Eastern Washington, Spokane YMCA and the Bremerton Sailors. UW started the year with wins over Lincoln High School (Seattle) and Washington High School (Portland) before taking down Whitworth and Whitman, all at home.

The game was a defensive battle, with neither team reaching the endzone. WSC got its points from Joe Halm's 35-yard field goal and a safety. Washington would also get a safety off a botched Halm punt. The contest would end in a 6-6 tie.

Neither team would suffer a defeat the rest of the way, with WSC finishing 4-0-2 and UW going 6-0-1.

The 1930 Washington State Cougars entered their game with Washington needing a win and an Oregon loss in the Civil War to secure a Pacific Coast Conference Championship. The Cougs were undefeated, including a 7-6 win over USC in a rare visit to Pullman for the Trojans.

The Huskies were in position to play spoiler at home, as losses to Oregon and Stanford had taken them out of the championship race.

Babe Hollingberry's WSC squad took a 3-0 lead early on a field goal from Lyle Maskell, and that would prove to be enough as both defenses held the rest of the way. The Cougars would go on to defeat Villanova the next week before heading to the Rose Bowl and falling to eventual national champion Alabama.

UW fell at USC in its final game to finish with a 5-4 record.

Many of the Apple Cup match-ups between winning teams came during the Hollingberry Era, as the Cougs were consistently good during that time. The Huskies got the upper hand in most of those contests, but a tie in 1942 may have been the most costly result.

The Cougars came into to the game against UW with just one loss -- a 26-12 defeat at the hands of USC. With a victory over the Huskies, Washington State would clinch at least a share of the conference title. UCLA was sitting at one loss and USC had a loss and a tie.

But UW would play the Cougs to a scoreless tie, and a week later UCLA would beat USC to secure the PCC crown. Washington State may not have reached the Rose Bowl had it won and finished in a first-place tie with UCLA, but it at least had a chance. That chance was squashed with the UW tie.

Jim Walden vs. The Dawgfather 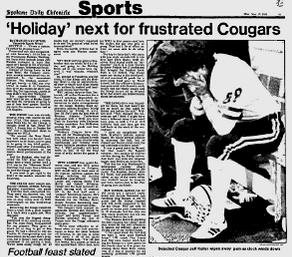 There have been trips to the Rose Bowl on the line for either side many times in Apple Cup history, but nothing may match the stakes in 1981. The Cougars and Huskies both came in the game with a chance for Pasadena, one that would have been the first in more than 50 years for WSU.

But Don James and the Huskies would send the Cougs back to Pullman with a 23-10 loss. WSU coach Jim Walden has never been one to hold his tongue, and he put it best to the Spokane Chronicle after the game:

"Given a choice, I'd rather be playing Iowa."

Instead, the Cougars would go on to a 38-36 loss to BYU in the Holiday Bowl, WSU's first postseason trip since the 1931 Rose Bowl. The Huskies would take down Iowa, 28-0, in the Grandaddy of Them All. 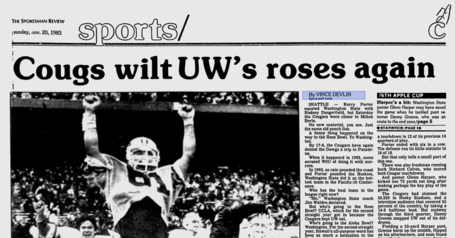 Walden and the Cougs exacted some revenge for 1981's disappointment the next year, when they stunned the Huskies in Pullman to prevent a Washington Rose Bowl trip. WSU doubled-down on revenge in 1983, this time in front of a purple-clad crowd.

Washington State held Washington to its lowest point total of the season in a 17-6 win, and the Huskies would be headed somewhere other than Pasadena for the second-straight year.

The win put WSU at 7-4 for the season, but no bowls would come calling for the Cougs.

The 1992 Huskies were the last gasp of Washington dominance over West Coast football. They came to Pullman that year with a No. 5 ranking and a Rose Bowl berth already in hand.

WSU was on the verge of the most successful run in school history -- one that would end with two Rose Bowl trip along the way. The Cougs were a formidable opponent for UW, bringing eventual No. 1 pick Drew Bledsoe, the makings of what would become the Palouse Posse and a 7-3 record to the table.

The result alone would have made this game legendary in Cougar lore -- a 42-23 beatdown of the Huskies. But the environment is what likely makes it the most memorable Apple Cup to happen in Pullman.

A snowstorm turned Martin Stadium's turf from green to white. Cameras caught UW's players visibly miserable in the cold on the sideline. Accusations of special shoes for WSU would follow, as the Huskies struggled to gain footing.

And of course, there was Bledsoe to Bobo. 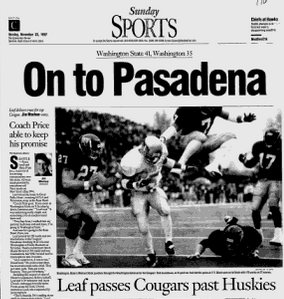 The 1997 Washington State Cougars are probably the best team in school history. Only a loss at Arizona State prevented WSU from an undefeated regular season. But as usual, WSU had to go through Washington to earn its first trip to Pasadena in 67 years, something it could not do in 1981.

There's been so much written about this game, and there are so many good stories to go along with it. This is hardly the place to find a thorough recap of the most important win in Cougar history.

Cliff notes: Ryan Leaf was his usual dominant self, and Cougs flooded the Husky Stadium turf as Washington State punched its ticket to the Rose Bowl with a 41-35 win.

Jason Gesser and his class did a lot of great things at WSU, including two 10-win seasons and a Pac-12 championship, but they were never able to win the Apple Cup. The most sour of those losses is likely the triple-overtime defeat in 2002.

Washington State came into the Apple Cup that year as high at its ever been -- ranked No. 3 in the polls with a loss at Ohio State the only blemish on the team's record. With the win over the Huskies, the Cougars could clinch the Pac-12 title and a trip to the Rose Bowl.

Until late in the the game, it looked like that is exactly what would happen.

But Gesser was injured, and the Cougs squandered a 10-point fourth-quarter lead. Three overtimes later, a batted-down Matt Kegel screen pass was ruled to be a lateral and UW came away with the upset victory.

Some of the sting was taken away when WSU beat UCLA to secure its Rose Bowl berth, but the 2002 Apple Cup will always go down as one of the most devastating in the series for Cougar fans.

All information used in this article compiled from WSU Libraries, Google News archives, wsucougars.com and gohuskies.com.