Baxter had a good Thanksgiving and he is ready for a victory.

Share All sharing options for: Apple Cup 2013: Baxter's beer of the game

It's Apple Cup day, and Baxter is doing his best to brush off the usual dog hate to cheer on his Washington State Cougars. He's still excited about Thanksgiving, where he got to enjoy some turkey innards and try some new beers.

Those turkey innards were a much-needed treat, as the cold weather in Vermont has been rough on Baxter.

Check out all Baxter's beer choices 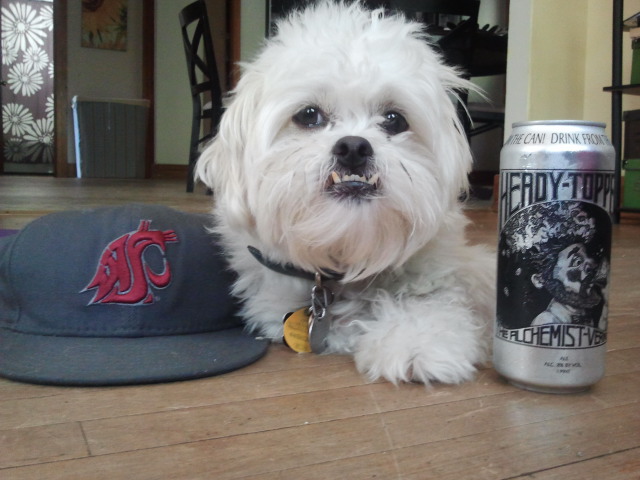 Baxter has reviewed many beers in his day. Find them here.

A combination of snowing and sub-freezing temperatures has made going to the bathroom a not-so-fun chore for Baxter. So much so that my girlfriend ordered him some paw mittens. Baxter didn't appreciate those, but we got a kick out of watching him try and walk around.

Sorry about that, Baxter.

Anyways, onto the beer! Baxter wanted to go with a theme drink today. So did he go with a cider? Even though he has enjoyed some delicious craft ciders later, no!

Baxter has chosen a beer with an awesome name: Ballast Point's Victory at Sea. While UW's Husky Stadium may not technically be on the "sea," it is on the banks of Lake Washington. Close enough!

Victory at Sea is an Imperial Porter that Ballast Point describes as infused with whole vanilla beans and "San Diego's own Caffe Calabria coffee beans."

Craig's review: The smell of the beer is exactly as described, with vanilla and coffee aromas. The flavor is heavy on the roasted malt and coffee, as is typical of the porter style. There is more sweetness thanks to the higher ABV.

But that 10 percent ABV doesn't overwhelm the beer. In fact, the beer remains drinkable and smooth. Probably a dangerous combination. This beer might be enough to serve as a meal.

Ballast Point makes excellent brews, and I've never gone wrong with their creations. I would recommend trying them out.

Baxter's review: Yeah, beer, victory, whatever. Have you guys ever had turkey innards? They are the best thing in the history of the world. I ate them so fast and was yearning for more. Like, I was actually shaking I wanted some more so bad. Are turkey innards addictive? They sure seem like it to me.

That is what Bax and I will be having (including turkey leftovers). What you will be enjoying during the Apple Cup?