UCLA and Oregon face off for the Pac-12 Tournament Championship on Saturday night at 8 p.m. PT. What will you be having while you watch the game on ESPN?

Share All sharing options for: Pac-12 Tournament Championship 2013: Baxter's beer of the game

Baxter has had a good morning with Championship Saturday off to a fast start. Sure, his hometown Vermont Catamounts fell to Albany in the America East title game, but Bax won't let that get him down for a day of high-stakes action. If the double-overtime thriller between Memphis and Southern Miss is any indication, it will be a good day for sitting around and watching college basketball.

After getting some fresh Zero Gravity Brewery beer from a growler last week, Baxter sent me out to get another 64 ounce jug of a quality local beverage. He directed me about 45 minutes south to the town of Middlebury, Vt and the Drop In Brewery.

Brewmaster Steve Parkes at Drop-In Brewery hails from the UK, having been born in Scotland and raised in England. He isn't your standard start-up brewer, as he has many years in the craft beer business. Parkes actually runs a school for commercial brewers called the American Brewers' Guild where he runs classes to help brewers from around the country improve and grow. His imparts knowledge that he has gained from brewing and consulting at companies all over the country. I like to stop by and just talk beer with him, and I find myself learning more and more every time.

If you want a good follow on Facebook, like Drop In Brewery's page. Parkes provides excellent commentary on the industry, from the growing trend of unfiltered ales, to the practice of watering down beers (which isn't at all uncommon).

Linus Hall of Yazoo, a brewery I frequented in Nashville, Tenn., even took courses from Parkes. There is a wall of growlers and bottles at Drop-In Brewery that represent the breweries that Parkes has worked with. I helped contribute by bringing in a Yazoo growler and bottle of beer I had left over. 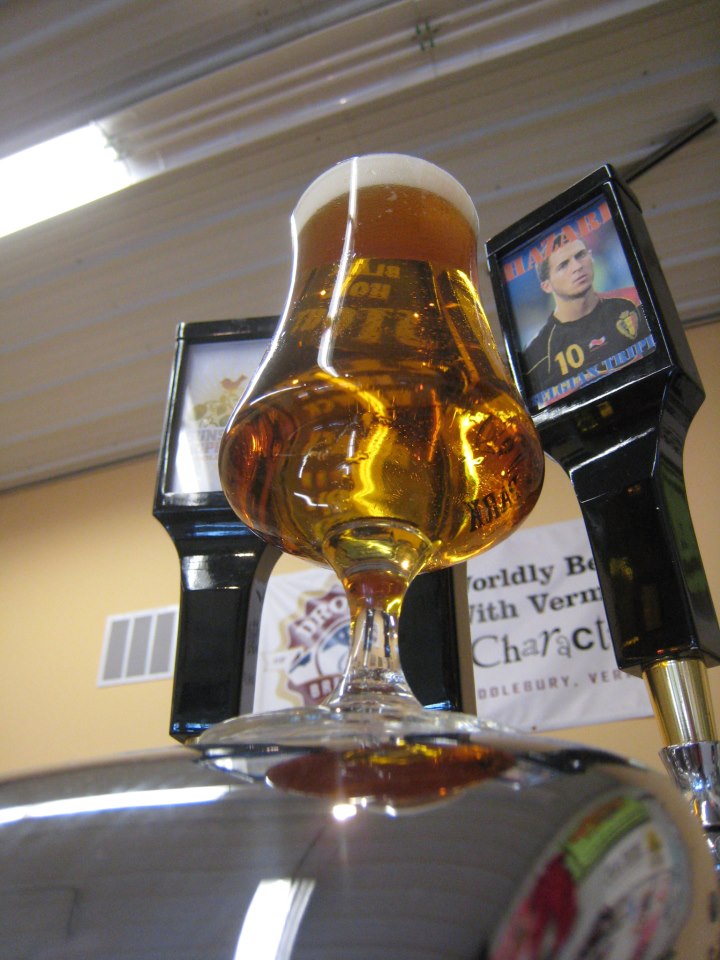 As for the beer at Drop In, it should come as no surprise that Parkes and his crew makes some fine beer in a variety of styles. Their flagship is Heart of Lothian, a delicious Scottish Ale that honors Parkes' roots. While down there last week, I also tried a nice session ale, Sunshine and Hoppiness (a Belgian golden ale with a nice hop kick), and this week's beer, the Hazard Belgian Tripel.

Drop-In's Tripel is brewed with "locally-bought" brown sugar. From talking with Parkes at the brewery, I learned that sugar is what gives Tripels their distinctive sweet flavor. The beer pours a nice golden color.

The Tripel has a nice sweet smell, and that continues with the initial taste. As it moves along the back of the tongue, it finishes clean with enough hop character. I especially like it after opening the growler and leaving it for a day, letting some of the carbonation seep out. The lack of carbonation enhanced some of the features in the beer.

A highly drinkable beer. Even at the 8.2 percent ABV, you won't taste the alcohol. I enjoy it as a nice desert after dinner, as the sweetness is just right to satisfy my post-meal sweet tooth. However, it is still not too sweet to enjoy with a hearty meal.

Craig has been yelling at the TV all morning. You would think that WSU was playing for a tournament bid today. He is crazy. At least he took a few minutes out of his day to take me outside. Someone tell the weather outside that it is the middle of March. It sucks to have to go to the bathroom outdoors sometimes. Not fair for dogs.

Oh, the beer? Yum-yum. Sweet and delicious. Craig wouldn't share much with me. Actually enjoyed the smell of a beer for the first time ever. Starting salivating as soon as he put it up to my nose. More of those beers, please!

Side note: Craig shoved some Basil Hayden bourbon in my face last night. That smelled awful. He let me lick a drop off his finger. It was disgusting, and I eat almost everything. Why do you people drink that poison?

So that is what Bax and I will be having. What new beers have you had lately and what will you be drinking on one of the holiest of college basketball days?