Taking a bye week off from the complaining and putting the Pac 12 coaches into cubicles.

Let's try something a little different this week.

I don't have much to say about the Oregon game that hasn't been said.  I expected us to lose by a lot.  We lost by a lot.  Nobody's talking about us losing by a lot because Oregon's Defensive Coordinator is a moron.    While the fans of each school pretended they were offended, I'm assuming the Oregon coaches are happy because they got it into the media that they blew the Cougs out by two touchdowns more than the final score and Washington State's coaches are happy because the only questions posed to them over the last few days are softballs about whether or not they want their players to play hard and by the time the story has run its course, everyone's forgotten the Oregon game and we've moved on to wondering about Mike Leach's favorite scary movie.

But since we don't have a game this weekend to worry about, I figured I'd try an idea I've been holding on to for a year or so.   There have been thousands of words written about how the coaching profession is like high school, with its various cliques, clichés and stereotypes; but in a fever dream, I envisioned the coaching profession is not much different than your standard office politics.   When I was looking for a new job a couple years ago, one of the pillars of my search was "work from home."  As much as I miss having conversations with actual adults (rather than bulldogs), the best part is not having to deal with the following twelve people.  Here they are, in Pac-12 coach form.   Today, we'll do the North.  The South will come during WSU's next bye week.

The Guy Who Wants to be the Office DJ: Mark Helfrich

At my last job, there was a lady who kept one of those Sirius Satellite Boomboxes on her desk and played it just loud enough that everyone could hear it and not loud enough for anyone to tell her to turn it down without sounding like a dick.  It was diabolical.  Further, she kept it on one station.  All day, everyday:  Sirius' Top 20.  This doesn't sound any worse than the bubblegum pop stations on your normal radio dial, except for the fact that there are no commercials or DJ's, so the exact same twenty songs play on loop with little changeover day to day.  The other night, I was singing to my daughter to try and get her to stop crying and I found out I know all the words, start to finish, to Fergie's Big Girls Don't Cry, despite never seeking out to listen to that song on purpose.  It's the worst.   I own something like 27 Zeppelin albums, yet I probably know the words to more Katy Perry songs than any grown man ever ought to.    Oregon's Mark Helfrich does this for me.   Oregon has won consistently over the last decade or so by scoring 60 points per game and has now droned the rest of the league into thinking this is how we have to play football.  Rodriguez, Leach, Dykes, Sarkisian were al hired to catch their offenses up to Oregon.  And now instead of your school branching out into its own identity, you find yourself singing the same Ke$ha song Oregon's been playing for the last five yars.

The Guy Who Uses Slang that Wasn't Cool 20 Years Ago: Mike Riley 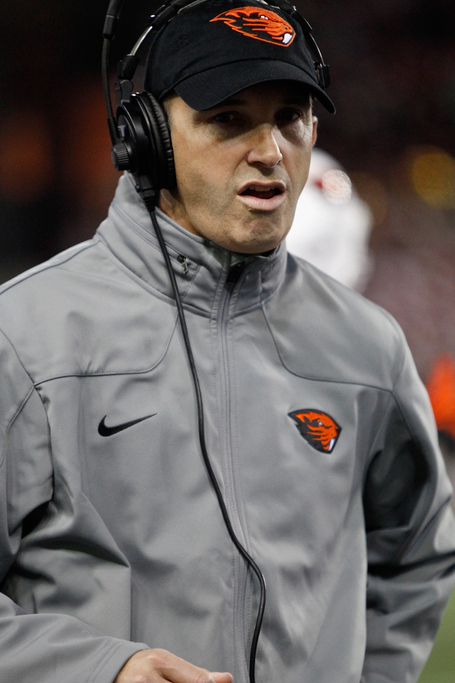 Have you ever been to one of those beginning of the year kickoff rallies where there's some executive on stage trying to get everyone excited about meeting key performance metrics and how this year you're going to be innovative even though it's still pretty much the same idea as the year before but with a new coat of paint?  Usually the executive on stage is 20 years older than the peons in the audience who are generally trying to break Candy Crush records rather than look up and see how the power point outlines profit margin goals for the rest of the fiscal year.   So these speeches get peppered with loud pop music, thundersticks and contests where the winner receives a corporate logo bumper sticker.   To make matters worse, they usually schedule these rallies after hours so you're stuck there instead of watching Frasier reruns in your underpants.  The part that has always fascinated me was the way the older executives would try to relate to their younger workers by using slang that is outdated even in the squarest sense of the word.  The last one I attended, the lady on stage demanded we actually raise the roof and do the hand motions and everything.   And once everyone had their hands in the air and were waving them like they just didn't care, she actually dropped a "yeah, that's how I roll" on us.   I swear three people quit their jobs that week after witnessing that.   So this has to be Mike Riley, right?  Taking the kids to In-N-Out, having high school kids tweet game film to him on Tuesdays, and bringing out the slip-n-slide at practice really makes me think he's probably done a Roger Rabbit dance in front of his players at some point in hopes of Rose Bowl motivation. 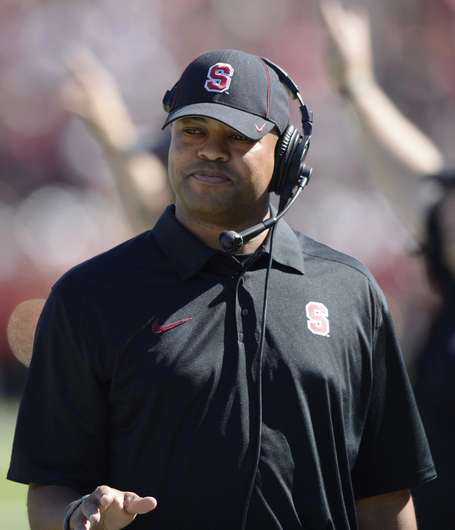 It isn't so much that this line is older than dirt, but what it represents.  It's usually the guy who is angling for a promotion and rather than do it through his own hard work, he sees his co-workers as competition and uses subtle jabs to try and elevate himself above all others.  I remember going meeting-to-meeting one morning and ended up being three minutes late to something that didn't really even involve me.  But the "working hard or hardly working" guy said "well, it's great that Kyle could finally join us!" Dude, people are still talking about who got kicked off The Bachelor last night.  Nobody's discussing metrics yet.   Lay off your smarm.  This is also the guy who will walk up to your desk and be really into the website on your computer, speaking loud enough for your boss to hear that you're on the internet.  Seriously, that guy is an ass.   With his feigned innocence a few weeks ago against Washington about how his players don't fake injuries to slow down offenses, throwing several instances of evidence to the contrary in the Oregon game the previous year, David Shaw is your conference perpetrator.  Talking endlessly about how things are run cleanly at Stanford, when in actuality it's just as dirty in Palo Alto.  They just build rockets when they go home. 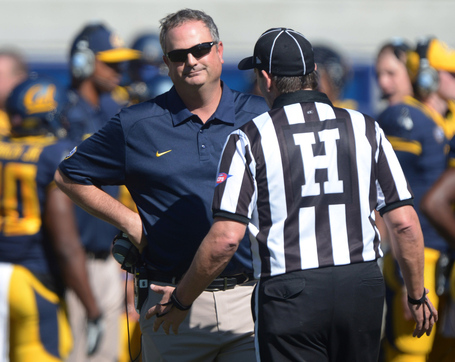 As with the radio guy above, the first rule to surviving cube-life is that silence is the best, but generally unattainable.  Most people will just put up with semi-quiet.  But there are always the few who ruin it for everyone by being loud because either A) they're ignorant to the level of noise they're making or B) they're broadcasting to the rest of the office because they think they're interesting.  Usually in the summer time, there are parents who will spend twenty minutes in the early afternoon to call home and check on their kids to presumably make sure they're still alive, sober and nobody's been locked in the dryer again.   Most people would go the stairwell or break room to make this phone call, but this guy wants the office to hear the funny insults he hurls at his kids.   Part of you wonders if he's just talking into a voicemail box and putting on a show that nobody wants to see.   But you really hope he's just oblivious to his surroundings.  Sort of like how Sonny Dykes showed up in Berkeley in an Escalade blaring Jay-Z and apparently got flipped off by the locals.  Or how he went on Bay Area radio over the summer and sang the praises of Jim Harbaugh.   Those seem to be two pretty tone deaf moves.  Again, we'll just hope he doesn't know any better rather than assuming he's putting on a troll show.

The guy with a 5MB E-mail Signature - Mike Leach 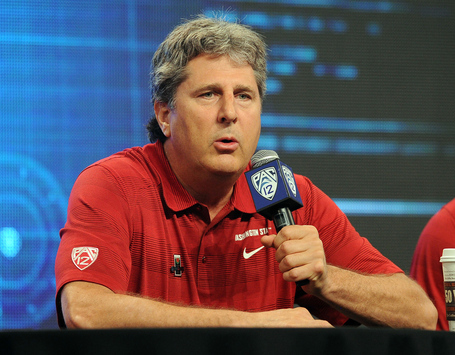 I remember one time I left on vacation for a week or so, and before I left I sent out a commission structure to a sales manager.  Upon returning from vacation, I found out I only received e-mails from the first three or four days I was gone due to a full mailbox, because the sales manager sent me roughly 30 e-mails in that time span.  While that wouldn't be a normal problem for most people you work with, this particular manager's e-mail signature had animated gifs of the company's logo, a picture of Ghandi overlayed with a quote showing his philiosphical side, an excel template containing a customer survey and topped off with a Christmas photo of his kids.  The signature was legitimately 5MB and was legendary for crashing computers throughout the office.  He was probably oblivious to the havoc his e-mail was causing and never made the connection that people were always knocking on his office door because they were afraid of receiving an e-mail from him.  I can only assume talking to Mike Leach is the same way.  You're hoping to get some short informational answers about what color tackling dummies to order and you end up with a 20 minute response about the Battle of Saratoga.   I will bet any amount of money Leach's e-mail signature resembles a Geocities page from 1998 complete with dancing Jesus gifs and laser backgrounds.  It just makes too much sense.

The guy who brings cups to the potluck - Steve Sarkisian 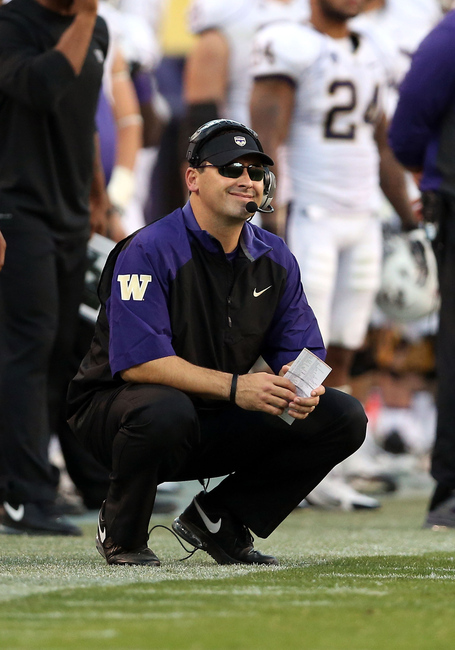 One of the more political hours of your month in a cubed environment is the office potluck.   Sometimes they were themed, but usually they happen organically right around the time the boss is craving some seven-layer dip and Little Smokies.  What to bring is usually a week of dread for the average worker.  You want to make sure you put a little bit of effort into it so you feel worthy enough to eat other people's food, but you don't want to stand out too much, less become obligated to spend four hours cooking the night before every event.    But there's always the one person who signs up to bring something that probably could've been found around the office.  Cups, paper plates, Doritos, a 2 liter of 7 up (but not all of those things; just one); anything that can be found within three minutes at the Chevron station across the street.  While Husky fans are watching Steve Sarkisian sink into yet another seven win season despite four straight years of top-level recruiting classes, million dollar defensive coordinators, a recruiting coordinator who stole a five-star player from his last job and an athletic department who just built him a half-billion dollar stadium.  What is Sarkisian bringing to this program?  Cups.  And a Fight Hunger Bowl berth.

In two weeks, we'll do the South.  Until then, Go Cougs (take the bye week and the points).