I spent 45 minutes searching for my keys the other day.

That is not an exaggeration.  For a period of time allowing you to watch an entire episode of Pretty Little Liars on Netflix and an additional three minutes to cry and reflect about the episode of Pretty Little Liars you just watched, I walked around my house looking through the same rooms, the same desks, the same tables, the same pants like a flipping zombie.  After what felt like a hundred laps around my house, I found my keys.  You know where they were?  On the key hook next to the garage where they were supposed to be.

This has been my life over the past ten days.  Some of you may have heard over twitter or comment sections that our daughter was born on September 28th, just in time to see the Cougs get boat raced by Stanford.  As a first time parent, I was aware I was going to be missing sleep for the foreseeable future, but was not prepared for my brain to turn to spaghetti as a result.   I sat down to write my column last Wednesday and this was as far as I got:

"The Cougs got destroyed and I almost dropped my newborn baby." FULL STOP.

We didn't know if we were going to have a boy or a girl until the delivery, so I had a post ready in case it was a boy saying something along the lines of "YOUR 2034 ROSE BOWL MVP HAS ARRIVED" complete with Spotify links to the Lion King song and a link to sign up for 2033 season tickets, but when it ended up being a girl, I scrapped that idea.  In hindsight, I'm really glad I had a daughter, as I could alread feel my inner Marv Marinovich coming out and could see myself demanding my baby do push-ups while I stretched his hamstrings and tossed him a medicine ball.  I had at least temporarily dodged transforming into the monster I'm destined to become, but it left me without anything to write.

I sat there and stared at a Word document with nothing but the above statement for roughly a half hour before cutting bait and taking a nap on my keyboard.   I suppose the last 400 words have been a roundabout way of saying I'm sorry I didn't get something up last week.  I'll make it up to you with something wildly off-topic during the bye week.

Like most newborns, my daughter cries.  A lot.  Mostly when I try to hold her.   My wife can give me the baby while she's sleeping and within 10 minutes or so, she'll wake up and realize she's in my lap and starts ringing the alarm as if my hands were made of knives.  True story: there have been only two extended periods of time when she's let me hold her without losing her mind:  during the WSU/Stanford and WSU/Cal games.  So in order to get the scarce time with my daughter I'm contractually allowed, I'm forced to check my emotions at the door and watch both games in near silence.   The lone time I lost my cool was when Kevin Hogan's pass in the 2nd quarter was picked off in the endzone to keep the Cougs in the game and I jumped off the hospital couch in excitement, almost forgetting I was holding a human that was roughly twelve hours old.  So in the interest of the permanence of the internet, if my daughter reads this fifteen years from now and is horrified her father almost dropped her on the first day, go ahead and blame Deone Bucannon.

It's October 9th and I'm still excited about Cougar Football, which considering what's happened to this team over the past ten years is a borderline miracle.  I know a lot of talk around the blogosphere has been focused around the Cougar flags and the Gameday event in Seattle, but I've really only been thinking about how terrified and delighted I am at the prospect of a sold out night game against the Beavs on Saturday.  The Stanford game (and to a lesser extent, the Cal game) showed what I was afraid of after Auburn in that our defense is really susceptible to a quarterback who knows what he's doing.    Hogan was able to burn our defense on the big play over and over and over again, and Cal was able to move the ball pretty easily in the first half, and it may have been a different game entirely had they not turned the ball over on the goal line twice in the first quarter.   Now enter an Oregon State team whose strengths pretty much cover exactly what our team can't do.  They've also had a bye-week to heal and a free weekend to find more holes in our pass protection for Sean Mannion to exploit.   For the life of me, I can't figure out why we're favored, yet I can't shake the feeling we're going to win this game despite all evidence to the contrary.  I think the primary reason for this is coming full circle on embracing Connor Halliday.

Back in 2011 after Halliday had his game of Flyer's Up with Arizona State, I really was excited about what Halliday could bring.  Essentially our very own version of Jeff George.  Dude was going to throw it all over the field and whether it was spectacular or abominable, it was going to be entertaining.  I remember really wanting to nickname him Highlander, but you all went with the Gunslinger thing.   So I humbly submit Highlander again.  Both Halliday and Highlander are named Connor, both are brash and terrifying and both will keep fighting until someone cuts his head off with a katana.  Watching that kid take hit after hit after hit on Saturday all while playing with one hip and throwing over 500 yards was one of the greatest things I've seen a Coug do, regardless of it being merely against a Cal.   Watching Halliday keep getting up on Saturday makes me believe in him and makes me (finally) believe in this team, despite the flaws.   Despite it probably being the only three hours my daughter will allow me anywhere near her this week, I have to be at this game.  I can't remember the last time I was this ready for Cougar football to do something great.

Win this game and you can probably find another 2 or 3 wins on the schedule to get us a trip to Vegas for Christmas.  Lose this game and you can probably start getting ready for Rutgers.  Isn't that the best?  Didn't you miss this?  We're going all in on Saturday, and win or lose, I'm going to be full of tailgate barbecue and fermented turpentine and ready to watch Cougar Football FINALLY get back off the mat.  Leave your flags in Seattle and join me.

Go Cougs.  (take ‘em and give the points) 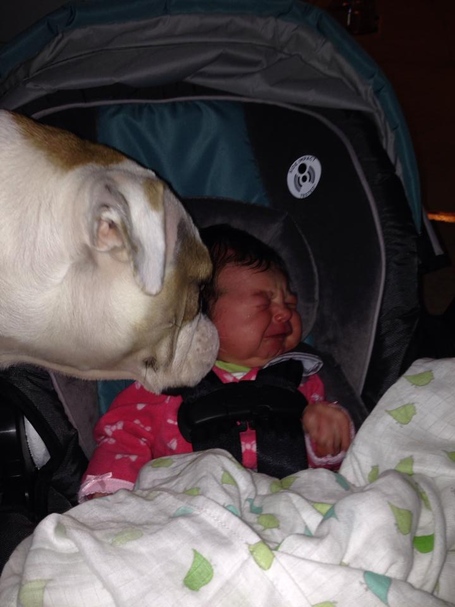 Who cries because of a bulldog?  It's going to be a long eighteen years.