WSU Football: What the Cougars need to do to get bowl eligible

The Cougs face a tall task to make it to the postseason, needing to win two of their final three games to get there. Here are some things they'll probably need to do to see it become reality.

Share All sharing options for: WSU Football: What the Cougars need to do to get bowl eligible

With three games to play, the home stretch of the WSU Cougars football season is now upon us. I write this, like, every year, but holy crap where does the season go? We spend what seems like an interminable amount of time waiting for it to start, and then POOF we've just a few weeks left.

Which leaves just a few more chances for this four-win team to get bowl eligible.

This isn't the worst position for the Cougs to be sitting in; that actually would be sitting here already eliminated from bowl contention. Only slightly worse would be needing the team to win out to get to six wins. Thankfully, neither of those situations is the case.

If we were being honest, though, I think most of us thought it would be close to ideal if these guys just needed one win in the final three to get bowl eligible. When the team got to 4-2 with its win over Cal, we knew the back half was going to be tough. I simply was hoping for one win in the third quarter (games seven to nine) and one win in the fourth quarter to get there.

Now we need two wins in the fourth quarter, and I know my own personal confidence is pretty low that these guys can attain that.

But since I'm a fan -- and since none of these three teams is unbeatable in the sense that Oregon, Stanford and ASU probably were unbeatable from a talent standpoint -- that won't stop me from hoping and trying to think of ways for this team to get it together in time to make it to college football's promised land.*

*OK, maybe it's just our promised land, since the rest of the teams in the big conferences have their sites set on things like BCS bids and national championships. Whatever. Don't judge me!

There are a lot of things this team can do better. That probably goes without saying, but hey, I said it anyway just to get that out of the way before you see the following non-exhaustive list of things that I think are key to improving for this team to somehow find a couple of wins in the final three games.

Return of the run defense

Thought for most of the season to be the unquestioned strength of the defense, the Cougs have gotten lit up pretty good the past couple of games. Granted, they looked pretty good before Oregon and Arizona State -- ranked second and eighth, respectively, in rushing in Bill Connelly's S&P+ -- got to them, but that doesn't make me feel a whole heck of a lot better.

Why? Because while the details of Arizona's offense are different, the spread/misdirection/read elements of it are not, and the Wildcats also deploy the most explosive running back WSU will face all year in Ka'Deem Carey. Of the three teams left, the Wildcats are best positioned to exploit the blueprint left by Oregon State, which is to make the Cougars move laterally to expose their lack of sideline-to-sideline speed.

Utah and Washington each scare me less because their run games are more power based, and WSU has shown itself competent in that regard this year. However, Utah's running backs gained 154 yards on 26 carries against Stanford, and UW has some guy named Bishop Sankey, who only has 1,305 yards on 5.9 yards per carry. Both teams are more than capable of gashing the Cougs.

If WSU is going to have a prayer of beating two of these three teams, it has to start up front defensively. The defensive line we praised so heavily early in the year spent good portions of the past two games being shoved around, and the linebackers have struggled to get off blocks and make tackles. Ioane Gauta, Toni Pole and Xavier Cooper must be the disruptive forces they were earlier this year, and Darryl Monroe has to get back to hitting people.

Saying this, of course, is like ... yanno. But I think most fans intuitively understand that there are teams that are of a talent level that they can survive a certain number of critical errors and still win. My favorite professional football team falls into that category. 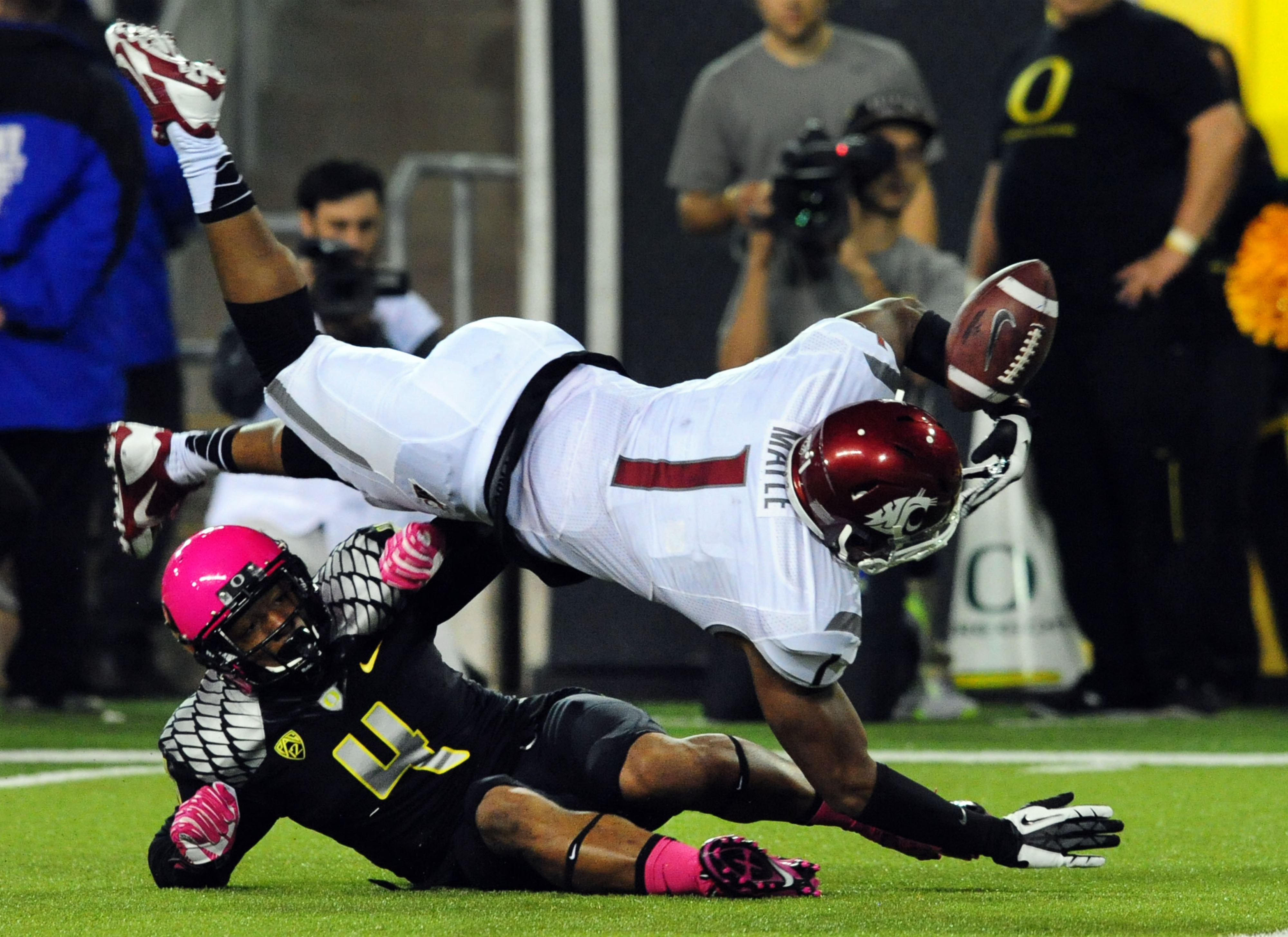 WSU likely won't be able to survive many mistakes such as this if it wants to win two games down the stretch. (Photo: Steve Dykes/Getty Images)

WSU, clearly, is not yet that team.

The most obvious mistakes that draw the ire of fans are Connor Halliday's unnecessary throws that lead to interceptions. But his are hardly the only mistakes. Dropped passes, missed tackles, runners carrying the ball carelessly ... all are going to have to virtually disappear for WSU in two of these games in order to have a chance.

I suppose there remains the possibility that Washington wants to re-enact last season's epic Apple Cup derp off. But counting on one or more of these three opponents to soil itself in such a fashion seems like a risky strategy.

Outcoach the opponent in at least one game

When WSU hired Mike Leach, we thought we were getting an offensive wizard. We might have, but it hasn't looked that way very often. The rapid improvement of the defense early in the year led some of us to wonder what kind of a gem we had in defensive coordinator Mike Breske, but his defense looked a step behind against Oregon State and Arizona State.

WSU is facing three teams who are more talented. If the Cougars are going to pick up a couple of wins, some sort of strategic advantage probably will have to be part of the equation in at least one of them. Fifteen days seems like plenty of time to cook something up for Arizona.