Taking a bye week off from the complaining and putting the Pac 12 coaches into cubicles. Part 2!

I'm hoping the game this week is a more enjoyable four hours than the last one.

My wife kicked me upstairs during the WSU/ASU game to answer the door for trick-or-treaters.  So while the Cougs are getting destroyed in the first quarter, I was forced to continually pause the game to hand out Reese's Cups to little kids dressed as Iron Man, Spider-Man and....Iron Man again.  (Was every kid Iron Man this year or just what felt like every kid?  I haven't seen a costume category get dominated so thoroughly since 1987 when something like 91% went door-to-door dressed as Daniel LaRusso.)

By the time the first half comes to a close and I'm in full meltdown mode, we've entered the portion of the evening where the teenagers show up without costumes and you are forced to run the scenarios through your head whether taking a stand on this thievery will get your house egged.  In the end, I relented and it cost me every Take 5 and bag of Whoppers in my bowl.  The only thing left at the end of the night were Twizzlers.  I hate Twizzlers.

Oh, and there was still another half of the Cougs!  The Twizzlers of College Football.

But enough about that game.  I think most of us would've had more to talk about if they just cancelled the 2nd half and broadcast the rest of the program live from the sand pit.  Anyway, a couple weeks ago, I promised to finish off putting the Pac-12 coaches into cubes.  If you missed the Pac-12 North you can read it here.  Today, let's check out the South.

The Guy Who Cooks Fish in the Microwave: Todd Graham 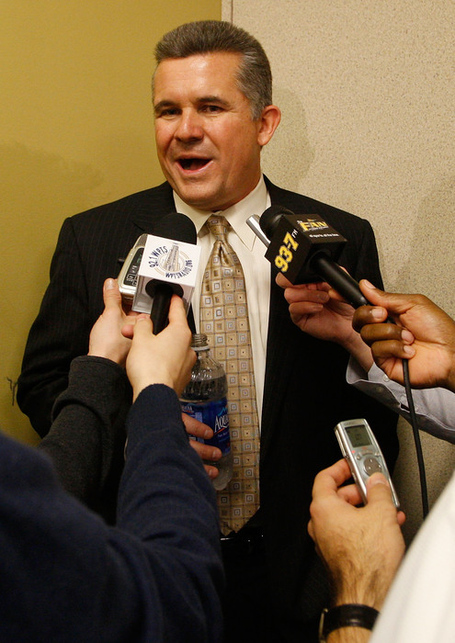 One thing of the more politically tenuous areas of your average office is the break room.  I made it a point to never set foot into any break room.  Because they always are ripe with trails of what everyone else ate for dinner the night before.  And nobody in your office is married to Giada.    I remember that some of the worst offenders also choose to eat their lunch at their desk.  Therefore, you're always smelling broccoli, curry, some sort of stink cheese, and worst of all, the guy who brought his leftover fish.  He's going to eat that thing right in front of you while you file your TPS reports because he's a multi-tasker:  He's eating his lunch and making everyone else sick simultaneously.   I've actually gone as far as to attempt to bribe the vending machine guy to NOT stock the microwave popcorn.   We're not all in the dark watching Hope Floats.  There's no reason to share that smell with the community.   Wouldn't you know it within a week or so of that failed bribery, they had to clear out the office because someone accidentally set the timer for 20 minutes instead of two minutes and the fire department got involved.   This is easily going to be ASU's Todd Graham.  He's absolutely the type of guy who will eat a banana and toss the peel into the garbage can under your desk.

The Guy who Brings in an order form for his kid's Girl Scout Cookies: Ed Orgeron 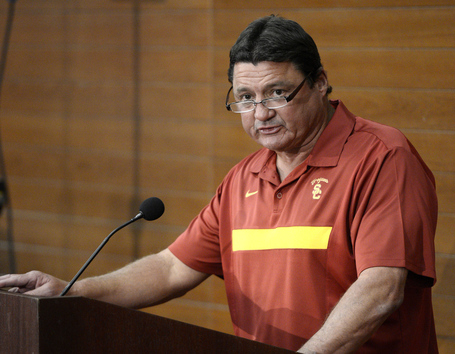 I'm not going to lie here, I have a soft spot for kids who are forced to go door to door selling stuff for their organization.  My wife secretly hates me for this.  I just remember how much I hated going door to door selling TICKETS TO A GOD DAMN T-BALL JAMBOREE when I was six or seven years old (actual question I remember to this day: You mean I have to pay a dollar to come see your t-ball team play a game that doesn't count?), that I immediately take pity on any kid that knocks on our door.  Our junk drawer is littered with unused Entertainment coupon books, receipts for magazine subscriptions that never came, tins of Boy Scout popcorn, you name it.  It's all there.   And I like Girl Scout Cookies as much as the next fat guy, but if I'm going across the street to Safeway to get a sandwich at lunch, I'm not going to tell the little Brownie at the door that I'm not buying her Tagalongs because Brian from Development mass-e-mailed our team an order form this morning.  Don't guilt me into buying your kids' cookies on their behalf when there are actual living breathing kids guilting me in person every time I need to buy more bananas to throw in your garbage can.   This guy is Ed Orgeron; the guy who knows whether he succeeds or fails, he's still going to be fired at the end of the season in favor of Tyrone Willingham or whoever cons the Trojans into that paycheck next season.  Ed's just putting in his half-assed effort until Cookie season is over, hoping his wife doesn't make him take that list into the office again next year.

The Guy Who Won't Stop Talking about 2 ½ Men: Kyle Whittingham 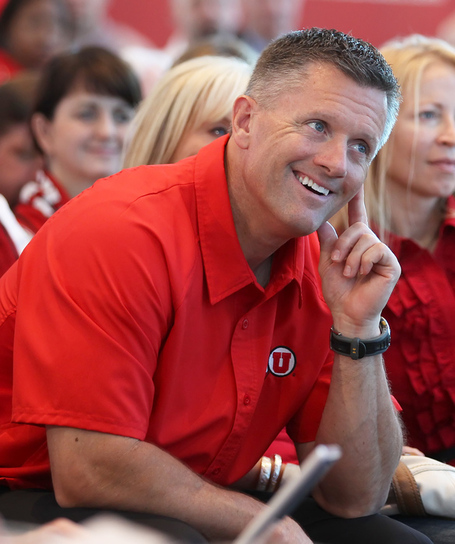 There are certain conversations that tend to be magnetic for office conversation.  Politics and religion are out, and sports is only a September through January activity, as the northwest has collectively given up on basketball and baseball seasons.  This generally leaves us with what was on TV last night, and since everyone on Earth is more afraid of spoilers than they are cancer at this point, the only conversations within earshot relate to which teenager did the best Shakira impression on American Idol the previous night.  While going back and forth over an early years episode of Breaking Bad, a guy interrupted us to ask if we could talk about 2 ½ Men.  What was there to talk about?  Was it the one where Charlie Sheen emasculates Jon Cryer and the ½ man makes a sex joke he's too young to understand?  That one?  The sad thing isn't that this guy was upset I don't watch his show.  The sad thing is I am outnumbered by this guy tenfold.  I get it; you need to watch your murder dramas and milquetoast comedies to forget about life for a minute.  But you have better options.   You're the reason Arrested Development got cancelled.   So this has to be Kyle Whittingham, right?  Not too flashy, not quite understood by the high-brow, but somehow effective.  And somehow has been around for 15 years.  But while we're at it, let's all as a society agree to stop being offended by spoilers.  Here's help: Bruce Willis was dead the whole time.  Don't you feel free now? (it should be noted my rough draft of this had the ending to Breaking Bad and I chickened out at publish time.) 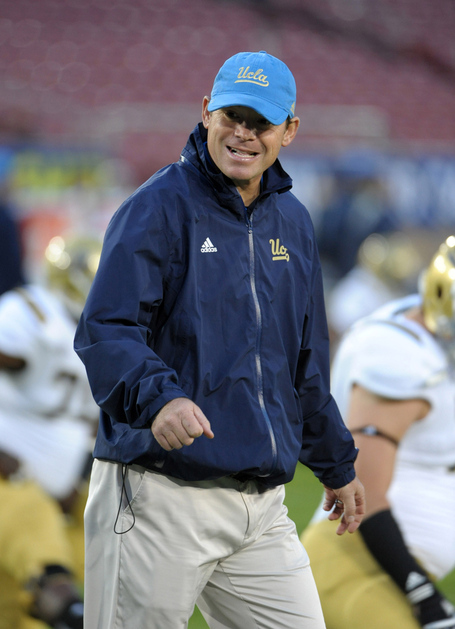 Every now and then, Marketing will be inviting guests in for some sort of morning meeting.  Not working in marketing, you would think this doesn't concern you, but the savvy employee knows that once that meeting is over, there are going to be donuts in the break room.  Now to get that donut, you may have to pass cooks-his-fish-guy, but hey, free donut!  Then on the very special days, Marketing buys ten too many box lunches and an adult version of the Hunger Games breaks out next to the Coke machine.  You don't tell people there are sandwiches in the break room.  You whisper that information, lest some eavesdropping 2 ½ Men fan hear about the treasure.   But here's what happens:  Some guy goes in there, grabs five of them and writes his name on them or even worse, takes them to his car.   This would be the equivalent of walking into Costco, seeing one of the sample ladies cooking her Bagel Bites and taking the entire tray, little toaster oven and all, and walking out the door.   Power move, but everybody else wanted one, too.   When you see Jim Mora Jr is telling parents of recruits that their child will get murdered a block away from campus if they choose USC, you have to think Mora isn't really into playing fair.   That guy's walking out of that office with at least eight free sandwiches.  And the only ones he's leaving you are the tuna and the veggie.  And there's nothing you can do about it.  His name is written on each one. 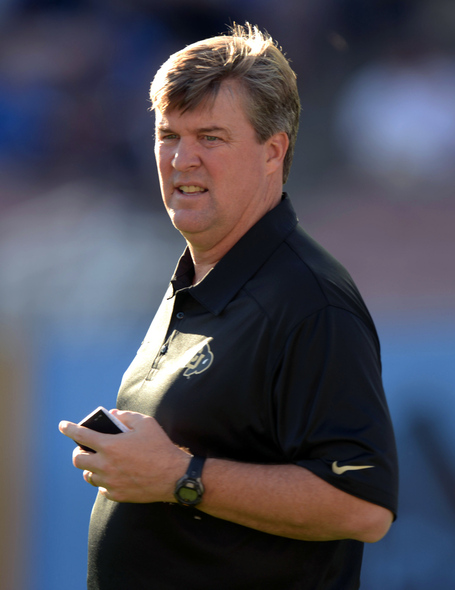 I get that workplace conversation generally leads to some lowest-common-denominator topics (hence, the 2 ½ Men guy upstream), but the sports bandwagonner is its own breed.  I'm not expecting anyone in the office to watch more college basketball than I do, but at least admit that when you're filling out your March Madness bracket.  A guy turned his in to me a couple springs ago and he had Duke winning the title.  Duke was not going to win the title and everyone knew it.   What follows is the exact conversation after giving his bracket a once-over.

"Seriously?  I don't know if I've ever met a Duke fan before.  I was really hoping Indiana would land Plumlee."

"Well, I haven't been following them much this year."

I'm getting to the point where I have to pigeon-hole some coaches here, but let me see if I can convince you Mike MacIntyre, who probably hadn't stepped foot into Colorado before signing his contract, is probably glad-handing fans in Denver, singing the praises of John Elway, Red Rocks and bull testicles.  Yet quizzed on any of these topics and he'd probably also try and use Grant Hill as an answer.

The Guy Who Eats Your Hot Pocket that was in the Freezer.: Rich Rodriguez 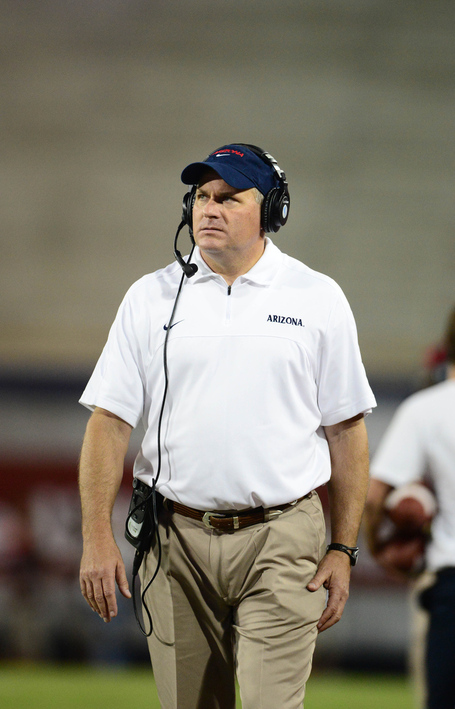 The refrigerator of any workplace breakroom can be more toxic than any other room in the building.  Yes, even those rooms.  Depending on how thorough the cleaning staff is, you can see somebody's leftover Pad Thai sit and collect mold for weeks.  So naturally, the smart ones among us (who don't leave the office to eat) bring in something for the freezer.  The problem with that is everyone brings in the same Lean Cuisine and Marie Calendar meals and nobody can tell each other's meals apart.  The guy in this scenario preys on your indecision.  He'll wait for an opportune time, usually an hour before most people start breaking for lunch, and he'll throw your burrito into the microwave and try and get out of there before you even know it's gone.  Of the 12 people I've listed in these pieces, this is the worst human being.  Yes, even worse than the lady who played Fergie a hundred times a day.  You wanted that burrito and it's not going to be there when you're ready.   This is definitely going to Rich Rodri....oh who am I kidding.  It's this dude, Matt.  He took my damn Meatball Hot Pocket right out of the freezer and I caught him eating it.  Then when I called him out, he looked me dead in the eye and lied about it.  You didn't bring in that Hot Pocket, Matt!  The Box that showed there was one left is sitting on top of the garbage can!  If I ever see you again, you owe me $1.50 and a trip to Albertson's!  I'm taking this injustice to my grave!

Go Cougs! (take Arizona and give the points)