WSU vs. Gonzaga: Previewing the Zags with Slipper Still Fits

It's time for the Cougs to renew the rivalry on Thursday, so we check in with the SB Nation site that knows the 13th-ranked Bulldogs best for a little Q&A action.

Share All sharing options for: WSU vs. Gonzaga: Previewing the Zags with Slipper Still Fits

Football has dominated the headlines around here for a few days in the wake of WSU's important win this past weekend, but basketball season is now in full swing as the renewal of the annual game with Gonzaga comes upon us Thursday (6 p.m. PST, ROOT Sports).

Despite historically owning the Zags (all-time record: 98-49, WSU), the Cougars haven't had much success in this rivalry as of late, with only a ruthlessly efficient Klay Thompson performance in 2010* interrupting a potential five-game losing streak. That isn't expected to change tomorrow night, as kenpom.com predicts Gonzaga would win about 9 out of every 10 matchups between these two teams by an average of 15 points.

*Seriously, it might have been Klay's best performance of his WSU career, which is obviously saying something -- 24 points on 14 shots, 6 rebounds, 7 assists, 7 steals, 1 super amazing block of a 7-footer. It also was the last time we got anything at all from Patrick Simon. Good times!

That said, WSU has played Gonzaga close in its three losses to the Bulldogs under Ken Bone, including last year's heartbreaker at the hands of Kevin Pangos. Could a similar surprise be in store tomorrow? It's doubtful, but that won't stop us from looking ahead to what might transpire. I mean, if we never wrote about WSU teams when it looked like they'd probably lose, there'd be no CougCenter!

To get an inside look at the Zags, we checked in with Peter Woodburn of Slipper Still Fits. I had three questions for him, which he so graciously took the time to answer. My answers to his three questions follow. 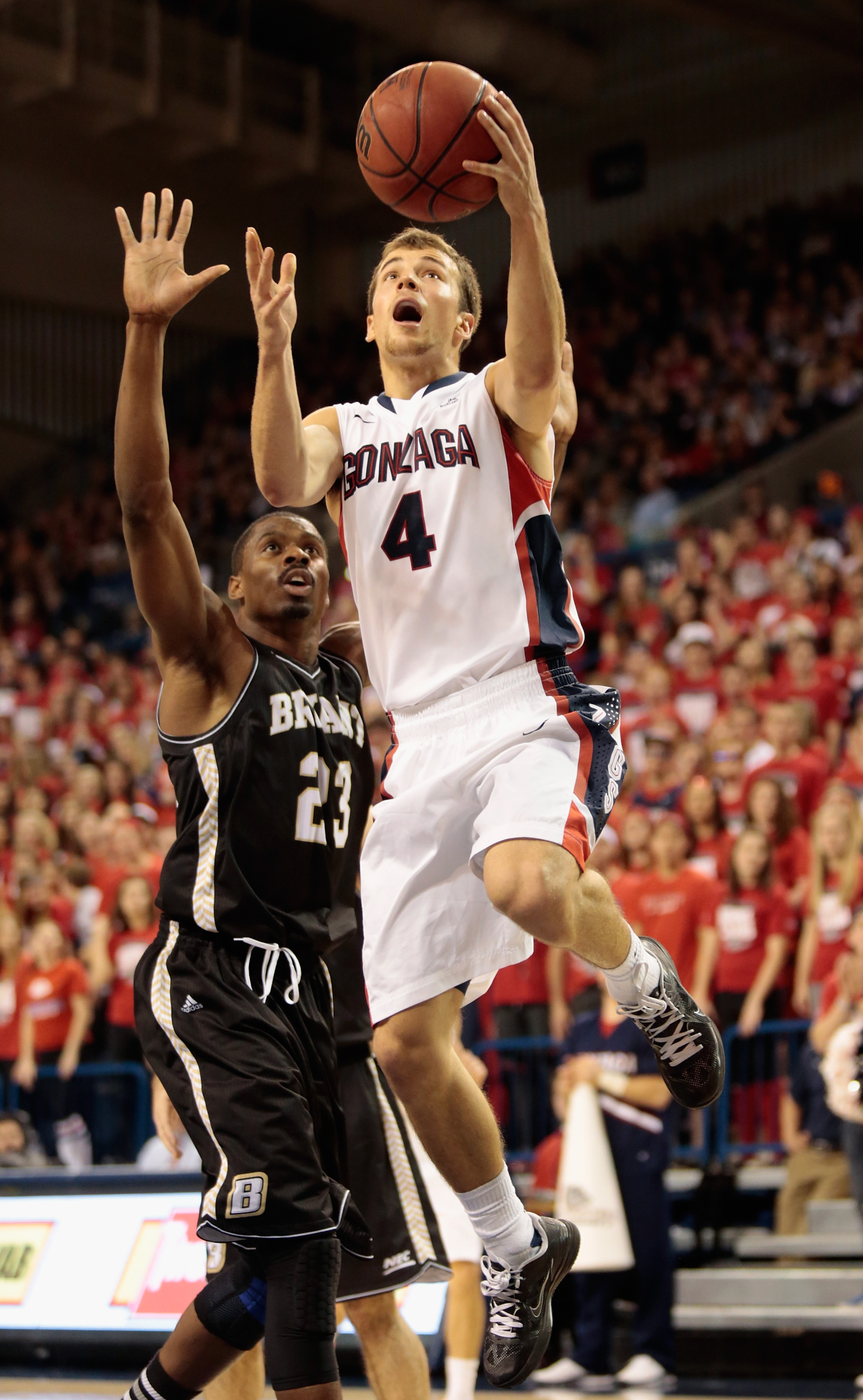 CougCenter: Last year, the offense flowed through Kelly Olynyk and Elias Harris. So far, Kevin Pangos is leading the charge, although the distribution of shots has been somewhat balanced. Is the balanced attack more a function of playing a couple of blowouts, or is that how you expect the Zags to get things done this year?

Peter: The distribution of points scored has largely been because of the quality of opponents. This is Kevin Pangos' team to lead and I fully expect him to be the team's leading scorer at the end of the year by a solid margin. With that said, the team's offensive focus is Pangos, Sam Dower and Gary Bell. After that it is a lot of quality role players, so seeing games with four or five players scoring in double figures shouldn't be too much of a surprise. Right now Mark Few is going with an eight-man rotation with the bench support getting enough minutes to have a big impact in the game if their shot is falling.

CougCenter: The Cougars are thin and generally unproven in the frontcourt. Please explain to us just how Sam Dower and Przemek Karnowski are going to abuse WSU's forwards.

Peter: Gonzaga is just as thin up front, just with better caliber players. After Dower and Karnowski, there isn't a single soul to throw in there, except for freshmen Ryan Edwards who probably won't make much of an impact this year. I don't envy any team going up against Sam Dower. He is the number one option down low and so far the early returns are showing he is capable of carrying the frontcourt (14.7 ppg, 10.3 rpg). It is tough to defend against Dower if he gets the ball, because he has great hands (0.9 career turnovers per game) and excellent footwork. If he takes the shot with his left hand, I have no statistics on it, but it is virtually always going in. He positions himself well, and the threat of having three guards that can hit an outside shot opens up a lot of the post for him to work. Karnowski is a bit different. He is a hulk, for sure, and shows great offensive awareness at times. Just his mass alone makes him a force to deal with down low. But he is also prone to really dumb fouls, and has been in early foul trouble two out of Gonzaga's three games.

CougCenter: Gonzaga has a reputation for losing games in which opponents go crazy from behind the three-point arc, and the Cougs like to shoot a lot of threes. An interesting thing I noticed about Gonzaga's defense: They're giving up fewer three-point attempts so far this year than they did last year. Is that due to any philosophical change in how the Zags are defending?

Peter: Last year, especially, was a low point for the Bulldogs' perimeter defense, and a problem that existed all year was blasted onto national television in the loss to Wichita State in the NCAA Tournament. The key difference this year is having more players that are solid on-ball defenders. Gary Bell is a great on-ball defender and Providence transfer Gerard Coleman has long, disruptive arms. David Stockton, albeit a bit slower than the top guards, is still a tenacious defender. Between the three players, Mark Few is usually able to have two of them on the court at the same time, and it helps lock down the perimeter a bit more. Teams still know to try and shoot a lot of threes, but the difference so far this season is that they are contested threes. It still is an issue for the Zags, and as demonstrated by the Oakland game on Sunday, when teams hit their threes against Gonzaga they can linger around in the game longer than they really have any business doing. 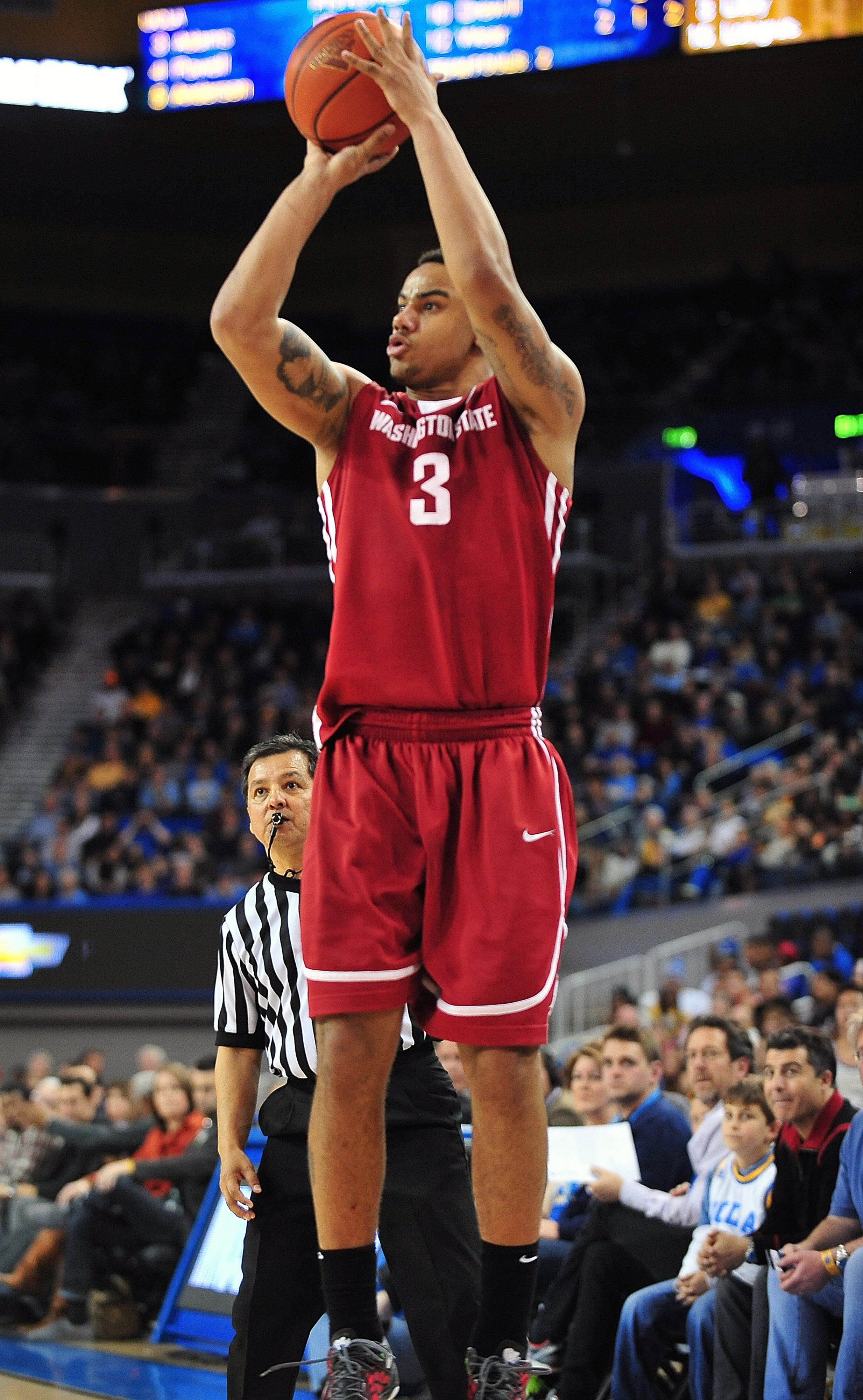 Can DaVonte Lacy continue his potent scoring against a more formidable foe?

Slipper Still Fits: The Cougars lost Brock Motum, and with it, a lot of scoring. Who will step in to fill the void?

Jeff: Before the year started, I would have said Royce Woolridge. He was the complementary scorer to Motum last year and had a huge finish to the season, including a 36-point outburst against Oregon on just 15 shots. But two games in, that guy is DaVonte Lacy. He's using a whopping 33 percent of WSU's possessions -- or, roughly what Motum was using -- and is doing it with a newly diversified game. A spot up shooter for the first two years of his career, Lacy is now using the new foul rules to his advantage to be aggressive going to the basket. He's still shooting a ton of threes (20 through the first two games), but his free throw rate is up more than 20 points to 64, due mostly to 17 free throw attempts in the first game.

I've long dreamed of Lacy using his strength and athleticism to do more than just camp out behind the arc, and if this change is actually real, Lacy and Woolridge could be an incredibly potent duo. Gonzaga is going to provide a nice little test to see whether this change is potentially sustainable.

Slipper Still Fits: After a couple of years of middling success the Cougars took a step back last year, especially in conference play. Is Ken Bone on a tighter lease and how long do you see him sticking around?

Jeff: This is a subject of much debate among Cougar fans. The results would suggest a coach on the hot seat -- his record in conference games is simply abysmal and incredibly troubling given that he was given the good fortune of coaching in a historically weak Pac-12.

Thing is, he was given a seven-year contract by the previous athletic director, and the cost to fire him after this season is two full years of his salary -- $1.7 million total. When you combine that with the $1 million-plus it would cost annually to hire a new coach, it becomes a bit prohibitive for an athletic department focusing all its energy on building up the football program to make a change. Because of that, basketball -- which generates little to no revenue for the department -- just isn't a priority right now. Even if the results would typically dictate a coaching change, chances are better than not that Bone sticks around, an unfortunate circumstance since recruiting is already suffering considerably.

Slipper Still Fits: The Pac-12 media poll predicted the Cougars at the cellar of the Pac-12 by quite a bit. Are they really that bad or will they surprise this year?

Jeff: I don't think they're that bad, mostly because I think USC and Utah are worse than the media voters were recognizing. I also think Oregon State isn't any better than WSU. But there isn't a lot of reason to think that WSU could surprise by pushing its way up the standings.

Although the backcourt is fairly deep -- junior wing Dexter Kernich-Drew can score, freshman Ike Iroegbu has flashed speed and an ability to get to the rim, freshman Que Johnson has a reputation as a shooter -- the frontcourt is terribly light on talent. D.J. Shelton is solid, but it drops off awfully quickly after that. And the defense is still sort of a mess, even though they really do appear seriously committed to improving that aspect of the team for the first time in Bone's tenure. The key is getting something out of transfer center Jordan Railey (a human foul machine with practically no offensive game) and forward Junior Longrus (whose production hasn't yet matched his athleticism) if they're going to surprise anyone.