The Cougs will face the Zags as heavy underdogs. We examine how WSU matches up with Gonzaga in this annual rivalry match-up.

The Washington State Cougars travel north to face the Gonzaga Bulldogs on Thursday night looking for their first win in the rivalry between the two Eastern Washington schools since 2010. It won't be easy, as Gonzaga is once again one of the better teams out West despite the losses of Elias Harris and Kelly Olynyk.

Mark Few's squad has had little trouble in ts first three contests, with its most impressive win coming against the best team it has faced: Colorado State. The Bulldogs were never tested by the Rams in a 93-61 blowout. That same CSU team is ranked No. 90 by Ken Pomeroy's laptop, 17 spots higher than Washington State.

If anything, the expected slow pace should give Coug fans a little more hope that WSU can stay within striking distance.

With that in mind, it shouldn't be surprising that KenPom predicts a 74-60 Gonzaga win with 91 percent confidence. Just a 14-point spread you say? That has a lot to do with the predicted pace: just 64 possessions. If anything, the expected slow pace should give Coug fans a little more hope that WSU can stay within striking distance.

Staying within a few possessions could be huge, because of the tendency for WSU to shoot a lot of 3s and Gonzaga to allow its opponents to take a lot of 3s. The Cougs are hoisting from long-range on 47 percent of their field goal attempts through two games -- 12th most in the country. Meanwhile, Zag opponents have taken 3s on 36 percent of attempts, well above the 32 percent national average.

WSU will have to shoot a lot better from outside if it is to stand a chance. The Cougars have made less than 25 percent of their 3s so far this season.

In a slow-paced game, getting hot from three can be huge. If the margin stays around two or three possessions, a stop sandwiched by a pair of three-pointers late could suddenly put a lot more pressure on Gonzaga.

So, aside from making everything from beyond the arc, how can WSU stay in this game?

Free throws can certainly help. The Cougars, led by DaVonte Lacy, have exploited the new foul rules nicely to the tune of 54 free throws per every 100 field goal attempts thus far -- 60th nationally. Gonzaga has put opponents on the foul line more than it has been there itself so far, and it is taking just 35 freebies for every 100 FGA.

But keeping Gonzaga off the foul line will be easier said than done, especially in the frontcourt. Gonzaga doesn't have a lot of bigs, but Sam Dower and Przemek Karnowski are a tough starting duo with which to contend. Dower has been solid at getting to the line (46 free throw rate) and has been ruthlessly efficient (145.6 ORtg).

Dower may be the more talented of the pair, by Karnowski may actually be more problematic for WSU. The Cougs have been fine on the defensive glass so far this season, but the 7'1 Karnowski presents has rebounded well on the offensive end and shoots a free throw for every shot he takes. If the Cougar big men don't box out, Karnowski could have a big game.

On the other end, the Cougs should not expect to have the same success on the offensive glass as they did against CSU Bakersfield and Lamar. Dower is grabbing an absurd 35 percent of defensive rebounds while he is on the floor, while Karnowski is pulling down 24 percent of those opportunities.

D.J. Shelton and Jordan Railey have both been effective on the glass, but that will be tested on Thursday.

Of course, the Zags are far more than a pair of big men. Gonzaga point guard Kevin Pangos haunts the dreams of WSU's fanbase, thanks to nine 3s in his debut against the Cougs and a game-winner last season in Pullman. The 6'2 junior is now the team's leader, as evidenced by taking 29 percent of the shots during his time on the court.

Pangos has been excellent as a ball-handler as well, assisting on 21 percent of his teammates' baskets while turning the ball over on just six percent of his possessions. 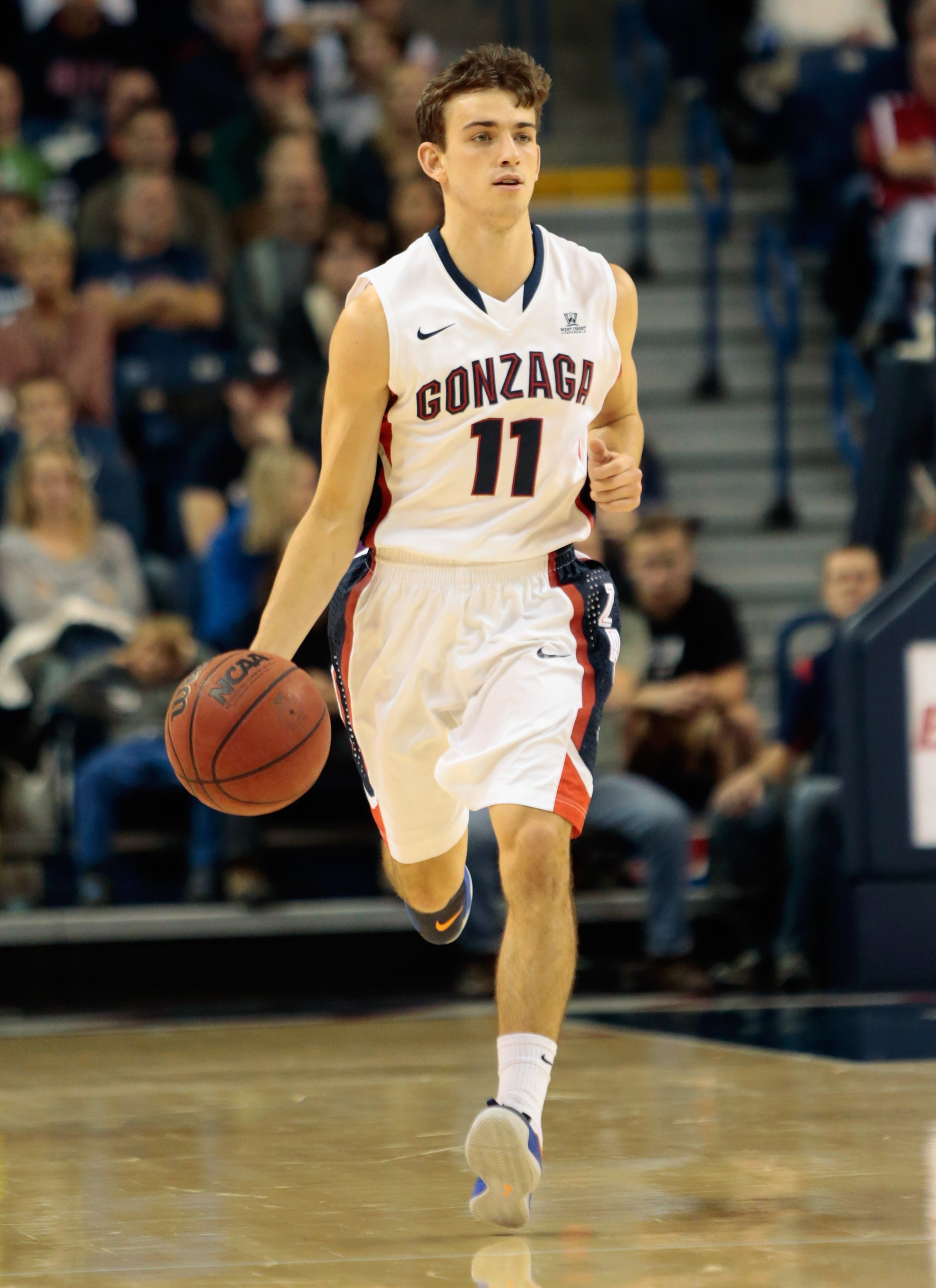 David Stockton has been a turnover machine while leading the Zags in minutes played.(Photo: William Mancebo-Getty Images)

That turnover rate is a stark contrast to backcourt mate David Stockton, who is giving it away on 27 percent of his uses. Stockton has played the most minutes of any player on Gonzaga's roster, but there are guys like Kyle Dranginis, Gerard Coleman and Drew Barham playing well enough to demand more time.

If Stockton does play major minutes, that is an area WSU guards Royce Woolridge and Lacy need to exploit.

One other guy in the backcourt that has been quietly successful against WSU over the years and is off to a blazing hot start to the season is Gary Bell, Jr. The junior has hit 13 of his 21 3s in three games -- good for 62 percent and the driving force behind his 173 offensive rating. The Cougs cannot afford to leave Bell open outside, he will make them pay.

Gonzaga has a lot of weapons on offense, probably far too many for WSU to contend with effectively. On the other end, the Cougs will need to take advantage of the outside looks the Zags will give them, while still maintaining some of the attacking style when those open shots aren't there.

The Zags are thin on the frontline, and driving the lane to draw fouls could be big. The problem is, that isn't how it always works with the new rules. Many of the fouls come on guards as they stick their hands on ball-handlers. Gonzaga has plenty of depth in the backcourt to deal with some foul trouble.

There's a lot that has to go right for WSU. The Cougs have typically played above their heads against Gonzaga under Ken Bone, but even that might not be enough this year. Look for the Bulldogs to come away with an easy win behind a strong offensive performance.