The evolution of Marcus Mason

Once buried on the depth chart, Marcus Mason has developed into one of WSU's best players.

Share All sharing options for: The evolution of Marcus Mason

I'll be honest, I was completely wrong about Marcus Mason.

Following his 12-carry, 15-yard sophomore season, I had all but written Mason off as depth chart fodder. I was even somewhat surprised he didn't transfer following last season. And oh am I happy I was wrong.

Mason has gone from an afterthought at running back, to one of WSU's best overall offensive players. He gets my vote for most improved player and it's not even close. It's impossible to know how much a single player impacts the win/loss record, but I don't think it's a stretch to say the Cougars might not be on the cusp of bowl eligibility without Mason. 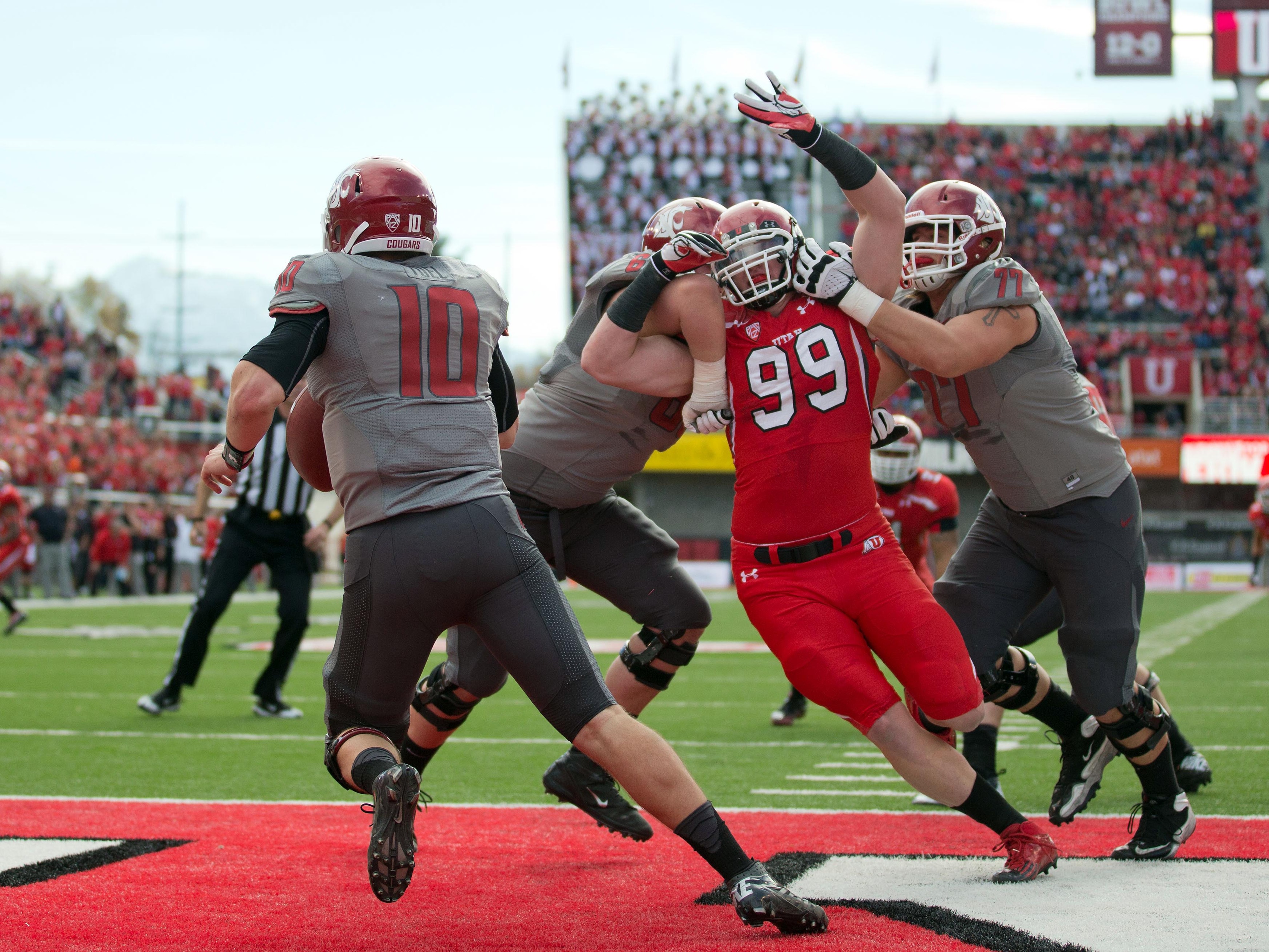 His path to WSU is an interesting one and he likely would have never landed in Pullman had Bishop Sankey not flipped from WSU to Washington. Sankey began to waiver late in the recruiting cycle and it became more and more apparent he was likely to flip. WSU offered Mason in early January -- the first contact the school had with him -- and he committed two weeks later. Sankey flipped to Washington a week after. Not only did Mason not hear from WSU until January, but his offer from the Cougs was the only scholarship offer he received.

So how did a player who didn't even receive a FCS offer become such a vital part of WSU's offense? Well, it wasn't a seamless process, that's for sure. When Mason committed to WSU, the buzz word surrounding him was speed. His Scout.com profile lists him as having run a electronically timed 4.38-second 40-yard dash with his time dipping into the 4.2s when hand timed. Mason impressed right away, earning a spot in the rotation as a true freshman.

His college debut couldn't have gone much better either. He came on late in the game against Idaho State and showed off his speed, breaking away for a 65-yard touchdown run. After gaining 88 yards in his debut, Mason rushed for just 24 yards on eight carries over the next 10 games. He fell out of the rotation at running back and was instead mostly used on special teams. He reappeared at running back in the Apple Cup, and rushed for 41 yards on five carries. He did very little running inside the tackles and the coaching staff instead used him to stretch the field.

With the regime change, Mason had to prove himself to new staff as a sophomore. The year didn't get off to the quick start like his freshman campaign and he instead spent the first half of the season behind Carl Winston, freshman Teondray Caldwell and Leon Brooks on the depth chart. He notched his first carry of the season in Week 8 against Stanford and finished the game with minus-1 yard on four attempts. He got minimal action the rest of the way and finished the season with a 1.3 yard per carry average.

Winston graduated and Caldwell rose to the top of the depth chart following a strong freshman season. The Cougars were set to bring in transfer Daniel Jenkins from Arizona, leaving Mason to likely battle for the No. 3 job with Brooks. The top two running backs tend to get the majority of the work in Leach offenses, meaning Mason wasn't penciled in for much of a role. This is what I wrote in January when taking a look at WSU's running back depth:

If I had to guess right now, I'd say Caldwell and Jenkins get close to an equal number of carries next season with Brooks and Mason sprinkled in. Wicks and Thompson redshirt while Morrow moves to defensive back. Depending on the health of Caldwell and the ability of Jenkins, I think this is a unit which could make major strides next season.

Then a funny thing happened. Jenkins changed his mind and decided to return to Arizona while Olito Thompson -- the top incoming recruit -- failed to qualify. All of a sudden there was a huge opportunity open at running back and Mason took full advantage.

He got his junior season off to a good start, carrying six times for 43 yards against Auburn. Once used almost exclusively on runs to the edge, the current coaching staff has taken advantage of Mason's skills as a complete running back. He's had success in short yardage, running between the tackles, catching the ball and in pass protection.

As a runner, Mason is averaging 4.6 yards per carry this season. He's also been about as consistent as they come. He hasn't broken off any long runs -- his long rush of the season is 17 yards -- but he consistently makes the right read and picks up positive yardage. He's also shown the ability to make a defender miss or use his vision to pick up extra yards on a cutback. His 15-yard touchdown run against Arizona was a great example of his development. There was no way he was pulling this off earlier in his career.

Mason and Caldwell have had similar success on the ground, but where Mason has stood out is as a receiver. He has 275 receiving yards, compared to Caldwell's 94. Mason's 35 receptions are the most by a WSU running back since 1989. He's been a consistent target for Connor Halliday all season, catching 79.5 percent of his targets for 6.3 yards per target. If you take out the ASU game, Mason's catch rate jumps to 87.2 percent and his YPT increases to 6.8. Even with the ASU game, Mason's numbers are excellent. Leach's running backs at Texas Tech posted a 77.7 percent catch rate and 5.8 yards per target. Mason isn't just a dump off option for two yards either, as he proved in the Cal game.

A year after surrendering 57 total sacks and 4.75 sacks per game, the Cougars are allowing just 2.2 sacks per game this season. A lot of credit is due to the offensive line and decisive decision making from Halliday, but Mason has also played a part. Although he's listed at just 5-foot-9 and 188 pounds, Mason is a more than willing blocker. I don't have a GIF to show off his blocking exploits, but I've noticed his blocking several times when re-watching games. Edit: fearthewheat found a blocking GIF. Mason comes across the line to pick up a free rusher and allow Halliday just enough time to escape. Then, instead of laying on the turf watching the play unfold, he springs back up and runs after the play. Effort beats size in a lot of cases.

When people talk about "diamonds in the rough" in recruiting, they often point out a two or three-star recruit who goes on to star in the NFL. Even with his improvements, Mason isn't likely to play in the NFL. He's not going to rush for 1,000 yards -- heck he might not even out rush linebacker Myles Jack this season. Instead, Mason is a prime example of the type of player WSU is rebuilding around.

He's a guy who literally no one else wanted. He said he didn't plan on going the junior college route, so Mason was probably a month away from never playing college football before WSU called. Yet, he's come in and worked extremely hard. It would have been easy to transfer after last season, or be content to be a non-factor the rest of his career. Go to workouts, stay on scholarship, get a degree and move on. Instead, Mason has done the one thing Mike Leach preach's the most, get a week better every week. I don't think it's a coincidence Mason's two best games this season have come in wins against Cal and Arizona. He had probably the best rushing game of his career against the Wildcats last week, picking up 63 yards on 11 carries.

Mason isn't likely to walk away with any all-conference honors. He's not a guy who is going to help WSU win any recruiting ranking awards. He's just a guy who will help them win games, just as he has all season.

Sometimes, it's really good to be wrong.