The basketball season tips off on Friday, so we check in with the various prognostications to get a gauge on what to expect from the team this season.

Share All sharing options for: WSU Basketball: Projecting the Cougars in 2013-2014

If you've already grown weary of the Ken Bone hot seat talk, you're likely in for a long season, because the probability that the Cougars produce results that definitively show the program is on the cusp of producing an NCAA tournament berth is low.

The Cougs finished tied for last in the Pac-12 last season, and two of the team's three most productive players -- Brock Motum and Mike Ladd -- are gone. Combo guard Royce Woolridge remains, and he is an excellent piece to have as an above average scorer and competent point guard (for stretches). But it's questionable how much help he will get from his teammates in an endeavor to pull out of the basement.

Plenty of rotation players return in D.J. Shelton, Dexter Kernich-Drew, DaVonte Lacy, Will DiIorio and Junior Longrus, but none of them appear to be candidates for the kind of breakthrough seasons that would allow this team to take a major step forward.

Shelton transformed himself into a stretch four last year, and in the process neutered his efficiency

Shelton transformed himself into a stretch four last year, and in the process neutered his efficiency: Standing around the three-point line all but eliminated the offensive rebounds and putbacks that made him a legitimate weapon as a sophomore. Although his minutes increased, his percentage of possessions used shrunk, and his offensive rating dropped by more than 10 points. With Bone seemingly married to the idea of Shelton as a perimeter player, he will have to shoot awfully well just to overcome the value he gives up by playing so far from the basket, never mind becoming a true impact player on offense.

Kernich-Drew and Lacy have proven themselves to be competent catch-and-shoot guys, but neither contributes much else offensively, and neither has demonstrated an ability to diversify his game since arriving in Pullman. DiIorio gives you exactly what you'd expect from a former walk-on who is a 6-foot-5, 190-pound forward: Lots of hustle but very little in the way of tangible contributions, something that is unlikely to change at this point. And Longrus was an extreme offensive liability as a freshman, although he did show a knack for picking up offensive rebounds and blocking some shots.

This is a team that was badly in need of a significant talent infusion, and it doesn't appear that it's gotten one. 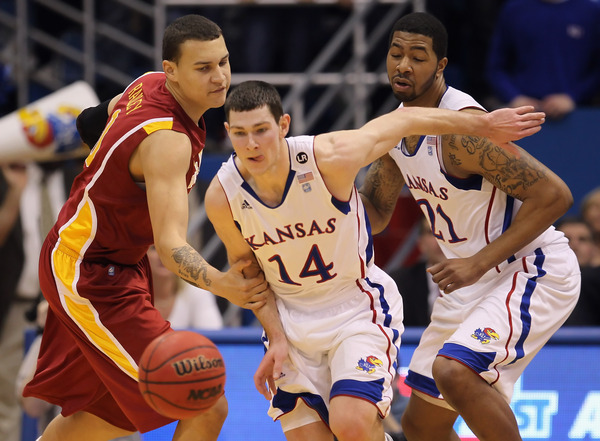 Jordan Railey (left) did a lot of this at Iowa State, committing fouls at a rate of nearly 10 per 40 minutes. (Photo: Jamie Squire/Getty Images)

Junior college transfer Danny Lawhorn, the pass-first point guard the team was missing a year ago, was expected to come in and play an important role right away. But he was suspended at the outset of practice and has since left the school. Transfer Jordan Railey, who will step in for Motum at center, was suspended around the same time. He has since returned to the team, but even in the best of circumstances, his modest production at Iowa State suggested he'd be little more than a space eater who could pick up a few blocks, rebounds ... and lots of fouls.

Among the freshmen, wing Que Johnson is the most highly touted, but expectations might be outsized. He was indeed a top 100 recruit once upon a time, but his stock fell in his senior year as it he played sparingly and it became apparent that there was academic baggage stemming from his choice of postgraduate academies. He was declared a non-qualifier by the NCAA upon his arrival at WSU, and Johnson spent the entirety of his freshman year barred from even practicing with the team as he attended classes. Johnson is now two years removed from his last competitive basketball, and his development was further stunted this offseason by a stress fracture that lingered into the opening of practice. He's being brought along slowly.

Forward Josh Hawkinson might actually be the most ready to contribute immediately. In high school, he demonstrated excellent hands and footwork that with a solid stroke to form a nice face-up game. His eight-point, six-rebound, three-assist outing against Central Washington in the exhibition is encouraging.

Guard Ike Iroegbu is athletic and will see minutes, but he is still raw.

With that, let's take a look at how the various prognosticators forecast the Cougs.

The Pac-12 media annually votes on the predicted finish of the conference; here's their predicted order of finish this season:

Not only does the media think the team is the worst in the conference, they think the Cougars are the worst by a long shot. There's Arizona at the top, UCLA/Colorado/Oregon/California grouped in the second tier, Stanford/Arizona State in the next tier, Washington a cut below that, Utah/OSU/USC in the fifth tier, and WSU -- all by its lonesome -- in the basement.

At least one human whom I respect thinks the Cougs aren't going to be that bad relative to their peers, though. ESPN.com Insider's Kevin Pelton (formerly of Basketball Prospectus) pegs the Cougs as the 10th-best team in the Pac-12 in his preview of the team ($).

If you're tired of all the negativity, this little bit of analysis is for you. It's not going to be unrelentingly positive, but it will comfort you to know that there are some computer algorithms that don't see the situation as quite so dire.

By far the most interesting thing about these computer projections: Two of the three project the Cougars to be better than they were a year ago.

By far the most interesting thing about these computer projections: Two of the three project the Cougars to be better than they were a year ago.

Let's start with the one that thinks they'll be worse, although the news isn't all bad.

The Cougs finished last season as Ken Pomeroy's 85th ranked team. His computer at kenpom.com (information on how he generates his preseason ratings here) projects the Cougars as 10th in the conference, behind Oregon State but ahead of USC and Utah, with an overall ranking of 103. He projects they'll pick up seven conference wins, as they sit about 30 overall spots behind the Beavers (projected for eight conference wins) and 10 spots ahead of the Trojans (six wins). His system actually sees the Utes as the clear-cut worst team in the conference, projecting them as 150th overall (five wins).

Although most of Pomeroy's site is behind a pay wall (available to you for a relatively minimal $20, an amount I gladly hand over to him annually), you can view his full projections for free here.

Dan Hanner, though, is even more optimistic about the Cougs. He took over preseason projections for College Basketball Prospectus from Pomeroy a year ago and continued with his projections for ESPN.com Insider's preview package ($) this year. Hanner's system is similar to Pomeroy's in that it uses generalizations about program performance and returning/departing production, but Hanner goes a bit deeper by using individual player projections to make his ratings "lineup based."

One more system for your consideration: TeamRankings.com -- which appears to use a similar model to Pomeroy --projects the Cougs to finish 10th in the Pac-12, but sees them and Oregon State essentially as a toss-up for ninth and 10th. Overall, TeamRankings.com projects WSU to finish the season ranked 109th after finishing 136th last April.

So, just to recap, here's what we've got:

It's not difficult to see why the media in general would be so down on the team, given all the factors detailed at the top of the story. And while we don't know the exact day these votes were cast, it's likely it was done around the time Lawhorn and Railey were suspended and Johnson wasn't practicing. Because humans tend to suffer from recency bias, it's not a stretch to think the writers looked at WSU and thought, "Man, that's a mess," and drop a team that already was last place a year ago down to the bottom.

I also think there's a little bit of excitement on their part about Dunk City West (Andy Enfield at USC) and admiration for the job Larry Krystkowiak did at Utah last year. The thing the computers see that the humans don't? The talent at both those places still doesn't look all that good. Computers know from history that past program performance and recruiting history are much stronger predictors of future performance than a change in style, a la USC. They also can sniff out when a team has gotten more favorable results than its efficiency margin would suggest and probably is due for regression, a la Utah. Moving those teams down means moving the Cougars up. 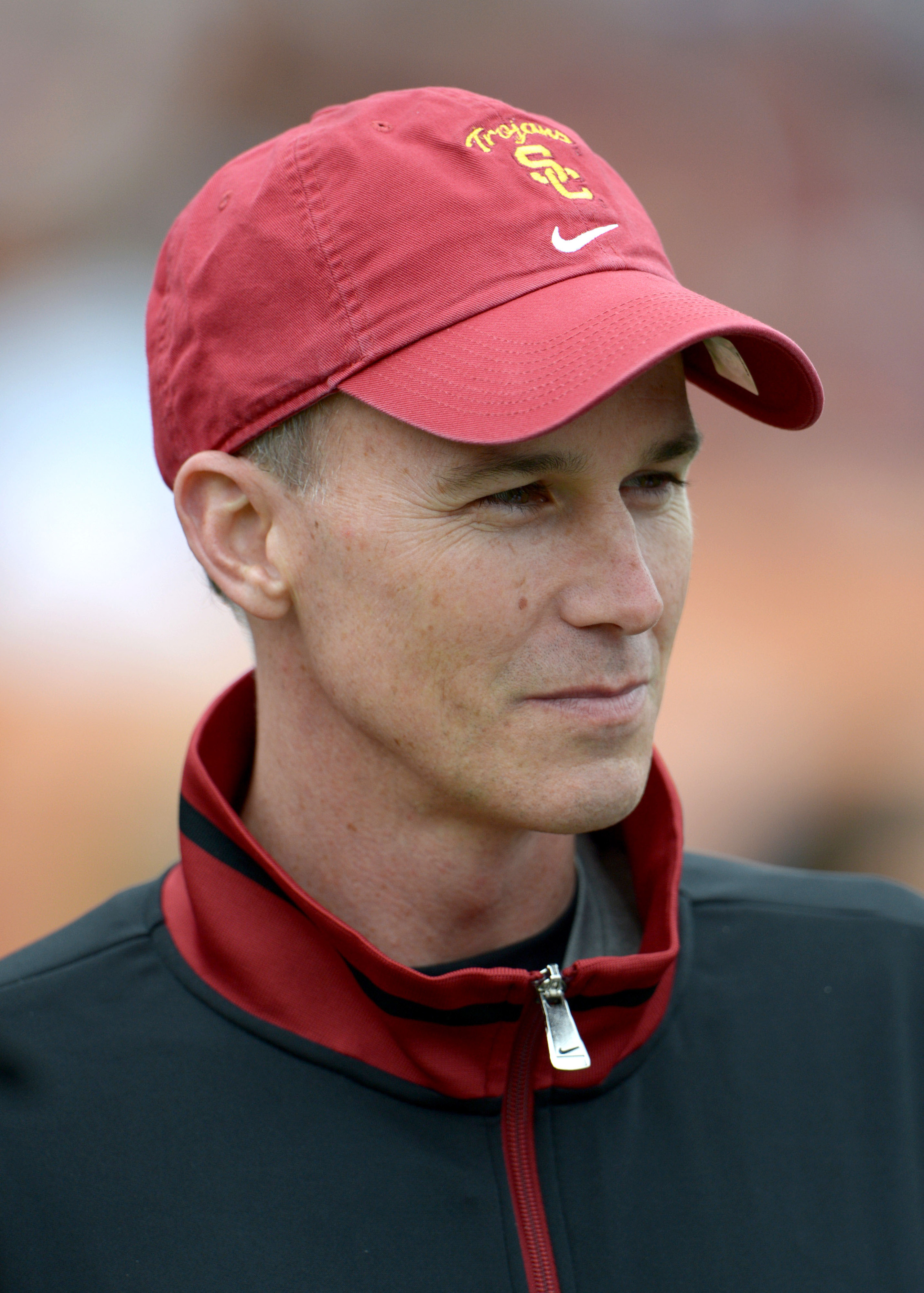 Andy Enfield has people excited for Dunk City West, but the computers are skeptical that a change in style will overcome all of USC's challenges.

Pelton's prediction is informed by this line of thinking. I chatted with him the other day about it, and he basically said: Utah's talent isn't as good as WSU's, and USC's depth is extremely questionable, especially up front. He had one caveat in his preview, however: WSU needed to improve a bit on defense.

That actually is one of the big drivers behind the laptops thinking the Cougs will be better overall. Both Pomeroy and Hanner's systems expect the defense to be improved based on returning personnel. And while TeamRankings.com doesn't list last year's offensive and defensive ratings, it would seem likely that they are forecasting a defensive improvement as well. I honestly don't know why that is, other than the expected minutes bumps for Shelton (excellent defensive rebounder) and Longrus (good shot blocker). But I think we all can agree that if this team actually is improved defensively, that would have an enormous impact on their season prospects.

Hanner's system sees the Cougs most optimistically. His system is the lone one that actually doesn't see the offense dropping off much at all, despite losing Motum. One of his factors is historical production of the coach, and Bone has a demonstrated history of putting together competent offenses -- only once in the last six years has he failed to cobble together a top 100 offense by Pomeroy's adjusted offensive efficiency (2010), and this team has far more quality offensive players than that one had. Just something to think about.

One of the cool things Hanner does is go beyond just presenting the most probable rating based on his 10,000 simulations of the 2013-2014 season; he also presents the "best case" and "worst case" scenarios, which are simply the results that appeared in the 90th and 10th percentiles. In that respect -- if everything goes right -- his system projects the Cougs could be as high 51st (a fringe NCAA Tournament bubble team). Then again, if everything blows up, his system expects the Cougs could sink as low as 138th. Basically, the Cougs' potential for disaster (a drop of 50ish spots) is higher than the potential for a breakout (a rise of 30ish spots).

So, with the season opener just about 24 hours away, what do you think? Do you buy what the computers are selling? What do think this team's ceiling and floor are?