Edit Mark: This is some excellent work by johnnycougar and well worth a read for anyone heading to Albuquerque to take in the bowl.

I thought that all you foreigners might like a guide to visiting the far-off, exotic land of New Mexico. What's that you say? New Mexico is actually part of the USA? Tell that to the lady who didn't believe I had a United States drivers license when I tried to buy liquor in Chicago. She had to call her manager, people, saying she needed approval to accept an international form of ID. Anyways... hopefully this brief guide will give you an idea of things to do in and around Albuquerque.

First off, for those who don't know, New Mexico is BIG. Albuquerque (ABQ) is not "big" so much as spread out, meaning unfortunately you will probably want to rent a car for your stay. Public transportation within the city is pretty good but trying to get anywhere fast will be difficult. However, if you're taking a few days around the game to explore the area, you'll want to rent a car anyways.

Second, New Mexico (at least ABQ and northwards) is High Desert. ABQ is at 5300 feet, Santa Fe is around 6500, and Los Alamos is around 7000. We have mountains (Mountains, Gandalf!), which means lots of skiing and hiking. Our mountains are generally considered part of the Rocky Mountain range, with the tallest peaks hitting just over 13000 feet. The takeaway message here is simple: New Mexico is not Arizona! While we do have cactus and desert and even roadrunners, get those old Looney Tunes images out of your head. If anything we're more like a slightly dirtier Colorado. In December, this translates to very cold night time temperatures, crisp and clear skies, maybe snow, and likely game-time temperatures of 40-50 degrees. The sun is key, if you are in the shade you will freeze. Also you may be surprised by how bright it is, so definitely bring shades. I love the skies and vistas out here, the clouds look a little different up this high and the blue sky has never looked better. Even if it's not terribly warm we should have bright and clear days.

Third, the local culture is very different from Washington. The food is its own thing, generally Mexican styled but with a Native American influence, and certainly not Tex-Mex. Chile here is a pepper, somewhere between a jalapeno and a bell pepper, and is put on just about everything. It comes in red or green varieties. These are not "salsas," maybe more like sauces. They come in a variety of spiciness so ask your waiter. You can order red, green, or Christmas (both). Most New Mexicans prefer green and most tourists prefer red. Another interesting aspect of the culture is the people's attitudes. You may never again see a whole parking lot full of empty carts, right next to the designated cart return spot (four years here, still have no idea why). People are generally friendly but not terribly social. Most buildings and houses are in the adobe style, and the colors for paints and dyes are bright and vibrant. There's nowhere quite like the Southwest, especially New Mexico. Albuquerque is right up against the mountains, making for some scenic views.

Sadly, information about the events surrounding the Gildan New Mexico Bowl is somewhat lacking. The best place to start for WSU fans is on the Alumni Association page (here). There are a few events the day before the game, and then there is the official WSU Pregame Party which you can join for $45 per adult. As far as NM hosted events, the obvious place to start is the official website, where you immediately see the most important info about the game and also "deals" on car rentals and hotel reservations. I have no idea if those are actually good deals.

The website also provides a list of things you can and can't bring into the stadium, vendor information, all that jazz. I'll point you there but also quickly summarize the important stuff.

First, unless you took public transit to the game or walked 15 minutes or so from the closest hotels, you'll need to park your car. Below is a map of the game day parking. For most games I end up parking in either Rio Grande or Pit West. Definitely get the cheap parking, at most it is an extra 3 minutes of walking. I seem to remember it being $10 last year. For the Isotopes games it's usually $5. 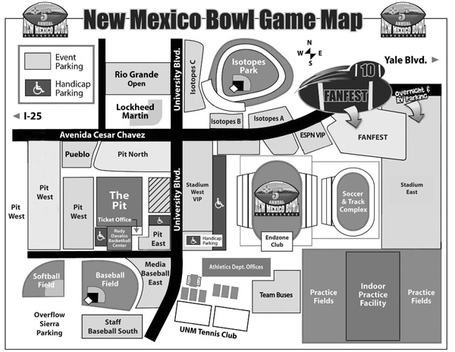 At this time I don't know what the tailgating policies will be or which lots will be set up for that. To be honest I didn't see a whole lot of that sort of thing last year. It's difficult to find information on it. Hopefully the WSU AD office will provide some guidelines / pointers or suggest meet-ups for Cougar fans. Most of us are veteran partyers, at worst we'll throw a party wherever we happen to be when we get there!

Before you head inside the stadium, it's worth at least checking out the official events. These are mostly located at the Fan Fest, which starts at 9am on game day. Last year they had a bunch of activities set up for kids and a few things for adults. They have giant inflatable bouncy castles and stuff. There is usually a band playing or one of the university's dance teams on a stage. There are a few vendors for food and team gear. The facebook page for last year is here and it gives you some idea of what's likely to go on this year. Local radio stations do their various promotions too, and this year 104.1 The Edge is hosting a drawing for a chance to kick a field goal in the stadium for $10,000. Overall, it's probably worth your time to check it out, especially if you have kids.

The stadium itself doesn't have a whole lot going for it. Basically it's small, clean, and cheap, with the pros and cons you'd expect. The views of the field are great from just about any seat. Almost all seats are metal bleachers, but we know you'll be standing the whole time anyways. Depending on where you sit, you'll also have a view of Albuquerque or the mountains. In general it is easy to find and get to your seat. Outside of the actual football game, however, there's not much that's great, as you can see by the seating chart below. Basically your food options amount to Pizza Hut and typical stadium concessions. I'm talking hot dogs and nachos, not garlic fries and sushi. Prices are pretty reasonable though. There are a couple stores where you can buy souvenirs or NM Lobo gear, and maybe those stores will have some special bowl-related items. But essentially the NM Bowl attitude seems to be "you came for the game, and maybe a chicken strip basket while you're at it." Important: at this time, alcohol is not sold inside the stadium. It's prohibited from being brought inside (snicker). 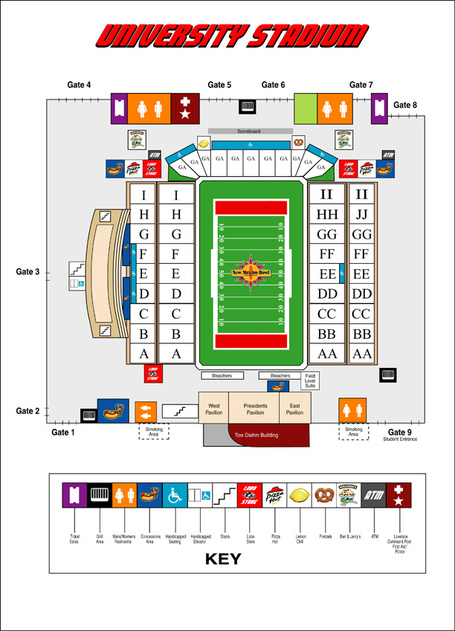 I am sure most Coug fans ended up buying tickets through the WSU website. As such, we'll probably all be lumped into an area stretching between the 20s and going all the way up. I can't remember which side of the stadium we will be on, likely it will be the side with the press box since I believe we are the home team. Either way, I imagine it will be a party in the stands!

Kickoff is at noon, I believe, and since it's a televised game it will be 3-4 hours. That's a long time if it's cold, so bundle up and bring blankets for those metal bleachers. Also unless you eat a very early lunch you will probably end up purchasing food. I recommend the hot dogs or pretzels.

For local Albuquerque attractions, I'd recommend itsatrip.org ("Things to Do"). ABQ can generally be geographically divided into four fairly similar quadrants by the two freeways which run through it (I-25 and I-40), but confusingly they don't really use this convenience when naming regions of the city. But I find it's still useful to think of the city this way. This map shows the various regions of interest (pdf). Historic oldtown and modern downtown and almost every major tourist attraction are in the SW quadrant. Midtown (basically the University and expected local offerings for college students), Uptown (shopping, shopping, shopping) and the airport are all in the SE quadrant. Uptown and Midtown both spill over slightly into the NE quadrant, which also runs up to the mountains (ski area, some hiking). The NW quadrant has some good restaurants and shopping close to the freeways.

Local options which I have personally been to and enjoyed included the ABQ BioPark (a zoo, an aquarium, and botanical gardens), Tent Rocks National Park, the Sandia Peak Tramway (highly recommend), and historic oldtown.There is an awesome Brazilian Grill (Tucanos) right downtown on Central that is a lot of fun. Waiters basically wander around with trays of fresh grilled meats and veggies and cut you a slice as you flag them down. Also Route 66 goes through Albuquerque, so there's a reasonable amount of historical and touristy stuff surrounding that.

If you have some extra time, I definitely recommend spending a day in Santa Fe. You can drive there in about 50 minutes on I-25 or take the New Mexico Rail Runner train for $10. The train drops you off almost perfectly downtown, and from there it's an easy walk to see many historic sights and try out some truly amazing restaurants. Santa Fe is kind of an eclectic mix of locals and tourists, and for some reason has a ruthlessly competitive restaurant market. This means that there are seriously good options for very low prices. These range from African / Mediterranean (Jambo Cafe) to sushi (Kohnami), family friendly pubs (The Cowgirl) to high end dining (Geronimo), French (Clafoutis) to local dive diners (Harry's Roadhouse).. I could go on all day. I'd suggest checking out Trip Advisor's site on Santa Fe. It's one of the oldest cities in America, over 400 years old! A lot of cool history here. Plus there's a reasonable chance of running into a movie star! A bunch of them buy homes out here to escape Hollywood, and New Mexico is often used for location shoots so you'll get famous people from time to time just walking around downtown.

As a science nerd, I also very highly recommend making the drive up to Los Alamos and checking out the Bradbury Science Museum. It's about a 90 minute drive from downtown ABQ. It's a combination history and science museum, with plenty of cool stuff for kids and adults alike. There is a lot of information about nuclear weapons and the Manhattan project intermixed with exhibits on the most cutting edge technology and research in the country (maybe the world).

New Mexico is also famous for its skiing. The local ski area, Sandia Peak, is opening this weekend so it probably won't be great in time for the NM Bowl. The lifts are slow and the runs aren't that great either, though it's cheap ($50 all day lift ticket). Ski Santa Fe is about 75 minutes away and is a little more expensive ($69), while Taos is world-renowned but is even more expensive ($77) and takes 2 1/2 hours or so to get to. A good rundown of NM skiing options is here.

Oh yeah, and if you're into that, we have a bunch of casinos. There are some very close to the airport, in fact.

Visiting northern New Mexico is a great opportunity to encounter an almost entirely different culture, try new foods, get a very old (pre-USA) or very important (nuclear weapon development) history lesson, enjoy the scenic mountain views, exercise a little, and most importantly take in a bowl game. Feel free to ask me about anything I mentioned here, or bring up any questions you have. 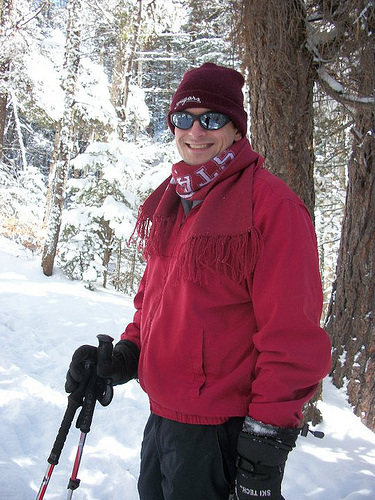