How likely is it that WSU ends up at the New Mexico Bowl? Or the Heart of Dallas Bowl? We take a look at the fall out from last weekend and explore the possibilities. 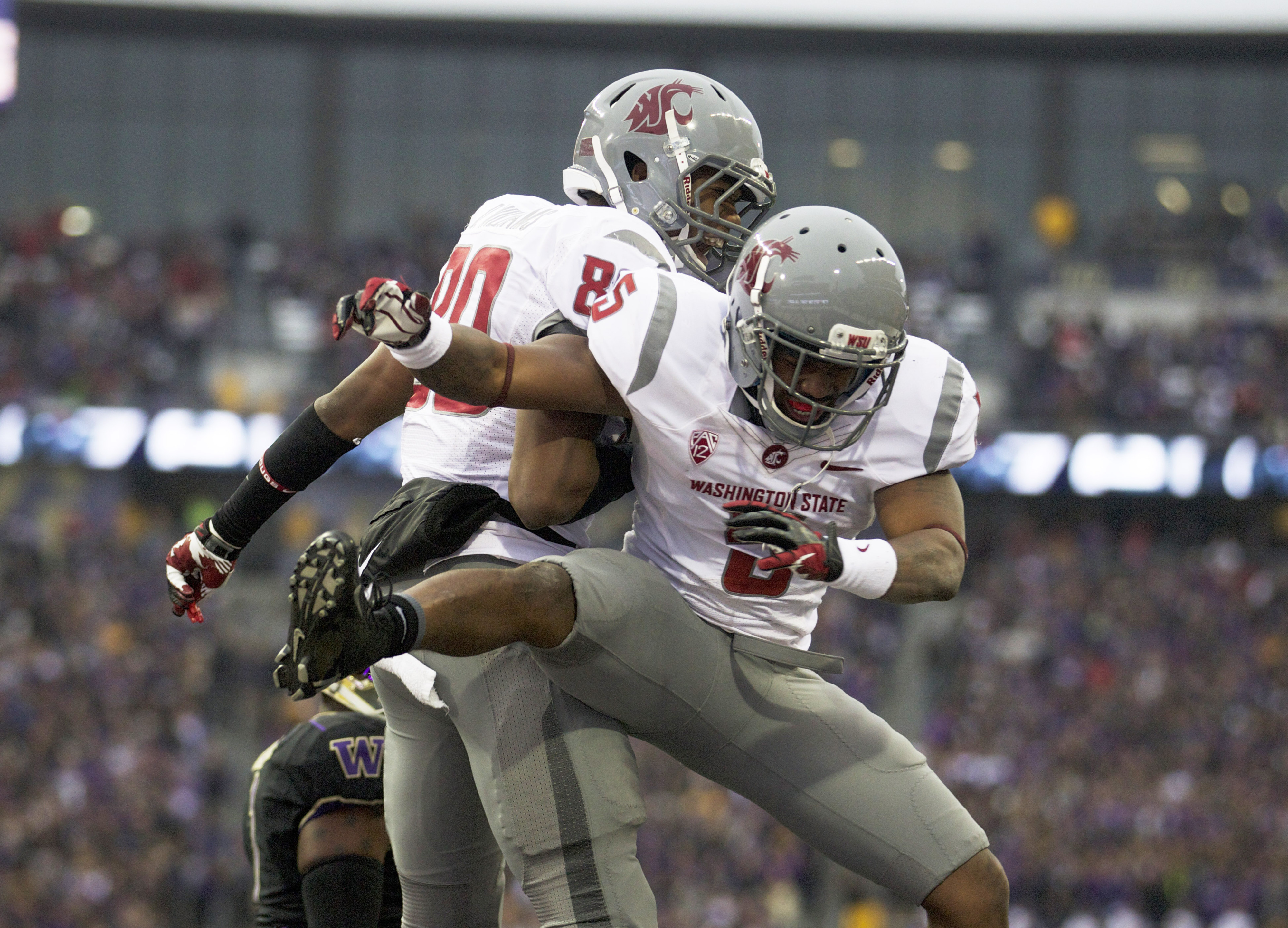 Our StoryStream with all of CougCenter's WSU bowl coverage.

However, where some doors were shut some windows were opened. WSU is in the mix for a lot of the same bowls we went over previously, though how they might get there is now a little different.

First, let's take a look at all the data, then we'll try to break it down bowl by bowl to see how likely it is that the Cougs end up at any of the specific destinations.

To start with, here's a table of all the bowl games, and their conference ties this season. You can also find this information on a Wikipedia page. Selection order reads top to bottom. WSU has anywhere from a non-zero to a reasonable shot at being selected for any of the bowls that are in bold-italics, including the two Pac-12 ties from the Kraft Fight Hunger and New Mexico bowls and the remaining are at-large bids.

Here are the conferences with their bowl eligible teams. Teams in bold are playing in the conference championship, while an asterisk (*) indicates that conference does not have a championship game. Teams in italics will be likely competition for WSU for at-large bowl bids; this is still pretty fluid with a week remaining and selections not always following conference standings that close, but this should give you a good idea.

They are ordered based on current conference standing (by overall W-L then conference W-L). Clicking on the conference will take you to the ESPN Standings page.

In the previous two weeks we've talked about how WSU needs certain conferences to keep from obtaining eligible teams in order for bowl spots to open up. Now the Cougs are a little more reliant on the uncertainty of the five BCS bids.

The selections for the Orange, Sugar, and Fiesta Bowls have a great impact on which bowls are available to lobby for WSU's participation.

The BCS rankings were released Sunday at around 5:30 PM PST:

The easiest way to go through this is going to be by bowl:

We said last week that the New Mexico Bowl was a solid option, almost regardless of the Apple Cup outcome. Obviously a win over the Huskies would've been preferable, but the Cougs still make a strong case here. The bowl is selecting between Washington State, Arizona, and Oregon State. Arizona got smacked around by ASU, but recently beat Oregon and features one of the top running backs in the nation. Oregon State is crash landing its season.  The Beavers almost put together enough to upset the Ducks in the Civil War, but fell just short in a competitive game.

WSU lost a close match with the Huskies but holds wins over USC and Arizona, has a stronger traveling fan base than either school, is bowl hungry (thirsty?) after a drought, and Albuquerque is a reasonably short five-hour drive for any Mike Leach fans residing in West Texas.

A few BCS options could open things up. If ASU beats Stanford in the PAC-12 Championship and gets the Rose Bowl bid, Stanford has a shot at an at-large BCS bid (although it's a very long shot, given how poorly the Cardinal travel). ASU probably does not have as good a shot if it loses. Oregon also has a chance at nabbing a BCS at-large, although all of these second-Pac-12-team-in-the-BCS scenarios are contingent on Northern Illinois losing the MAC championship game and getting left out. If any of those three teams are selected for a BCS at-large, the Fight Hunger bowl likely would be selecting from Arizona, WSU, and OSU; and the New Mexico bowl would select from the remaining two teams.

This would give WSU the possibility of the Fight Hunger Bowl, and strengthen its case for the New Mexico Bowl.

Washington head coach Steve Sarkisian leaving for USC introduces another level of uncertainty. Would the Fight Hunger bowl be interested hosting a coachless Husky team? One would think this move upped Arizona and Washington State's chances of landing in San Francisco. The Cougs offer an interesting bit of storyline: Coach Leach has a chance to complete the WSU turn-around with a bowl victory over the team he lost to in his Wazzu debut, which also happens to be his alma mater. Arizona will no doubt sell their upset over Oregon and top running back in the nation.

Bowls are allowed to select any eligible team within one game of the in-conference record of the highest ranked team available.  So despite the eight wins, the Cougs' six wins can still send them to Fight Hunger, if the bowl likes the match-up with BYU. 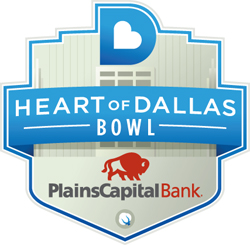 This bowl has to be high on Bill Moos' want list, and WSU has to be high the bowl's want list, too. In order for it to become available, the Big Ten needs to have one team selected for a BCS at-large bowl. Previously, we were rooting for Wisconsin, which finished its season this weekend losing to Penn State (on sanctions, not eligible). Now, we're all fans of Sparty, and to some degree Ohio State (gross).

A few different scenarios could play out here.

Michigan State beats Ohio State in the Championship and goes to the Rose Bowl. Ohio State would then be eligible for an at-large selection, and has a real good shot at getting one.

Ohio State beats Michigan State and plays in the BCS National Championship.  If Ohio State can hold on to a No. 2 ranking, it will earn the privilege of facing Jameis Winston and the Florida State Seminoles in the BCS Championship; that would also send Sparty to the Rose Bowl and open up the Heart of Dallas for us Cougs.

With a few different scenarios that make it possible, it's very likely this bowl opens up. If you're into social media activism, tweet at these people, they're awesome and that sort of stuff truly does not go unnoticed by committees.

@CougCenter does that air raid come with a cool flyover?

@CougCenter we would expect a flag appearance, heard y'all are good at that.

Well, Detroit for Christmas is still on the board. WSU is probably in competition with one of the slightly more regional Sun Belt teams (who might or might not have a secondary tie-in anyway), or mid-conference ACC teams for this match-up against the MAC.  It's also tough to see this bowl not trying everything possible to get Michigan in Detroit.  It selects eighth from the B1G and there are only seven eligible teams, six that can be chosen for the remaining ties if MSU or tOSU get an at-large BCS selection.

Maybe the Heart of Dallas (selects seventh) would be OK with Little Caesars selecting Michigan, if they were allowed to go out-of-conference in the spot above them to get WSU and Mike Leach? No idea if that sort of politicking is allowed, but it doesn't seem like an unreasonable agreement.

The Big 12 has six eligible teams and the Texas Bowl selects sixth from the conference. This bowl would become available if Oklahoma State or Baylor can get selected for an at-large BCS bowl. Baylor was almost a shoe-in until their loss in Stillwater last weekend.

The Texas Bowl will likely have their choice of B1G teams in: Nebraska, Iowa, and Minnesota (depending on what happens with other selections), and would gladly take Texas Tech in the Big 12 spot if they're available, but the odds aren't good they would be. Competition for the at-large here could be between any available Sun Belt team and the ACC teams, like most other spots. If SMU gets bowl eligible, they might be the stiff competition.

The Wazzu bid looks real strong. All of the positives we mentioned before with the Heart of Dallas bowl also apply here.  This bowl bid might have a higher probability of happening than Little Caesars. The odds Baylor or Oklahoma State can get an at-large are pretty good, and you have to think a bowl this size would want an AQ-conference school to fill the spot, one that has a coach that fans in Texas are interested in would be very enticing.

Before the Cougs were looking to back into this one through the AAC spot, now it could be eligible from either the AAC or SEC sides. The bowl selects ninth from the SEC, which now has nine eligible teams thanks to Mississippi State's upset of Ole Miss in the Egg Bowl.

Thanks to Auburn's insane, last-second miraculous ending in Jordan Hare last weekend, the SEC now boasts an Alabama team that will not be champion, eligible for an at-large BCS selection. A single at-large selection of either Auburn, Alabama, Missouri, South Carolina, or LSU (less likely) will open this bowl up.  There's also the chance one-loss Auburn beats Mizzou in the SEC Championship and is selected for the National Championship over an undefeated Ohio State. Considering the Auburn Tigers are touched by the hand of God this season, I wouldn't be too quick to rule that out either.

This bowl will have a good shot at being open on the SEC side. On the AAC side, where it selects fifth behind the Pinstripe, the Cougs need Rutgers and SMU to both continue to remain ineligible.

Ole Miss lost to Hail State and this bowl still found a way to be open for Cougs (War Eagle). WSU would need to outsell some local Sun Belt and MAC teams to get this match-up with the seventh selection from the ACC. This is another larger bowl, that would look to fill a spot with a AQ-conference opponent, and WSU would look real solid against the probable opponents. Again, Shreveport is 5-hours from New Orleans and that is probably the most awesome thing about Shreveport, but this is a great bowl game that could have a lot of interest in an up-and-coming Washington State squad.

Another bowl dependent on whether Rutgers and SMU can get eligible next weekend and features a match-up with a team from Conference USA. Both need to remain ineligible for this to be open for an at-large selection.

Some people are projecting WSU in this bowl, which is open because Army could not get bowl eligible. The bowl has a back-up tie with the MAC, for this very scenario. Their website also features the MAC standings, so it's probably a safe bet that's where they're going. It's possible people projecting the Cougs are real well connected to the bowls and know about some sort of back-room dealing, but it sure doesn't look like this is possible.

See anything we missed? Leave it in the comments, and we'll try to keep this post as up-to-date as possible.