We use a bubble plot to examine the attributes of recruiting classes under coaches Mike Leach, Paul Wulff and Bill Doba

Evaluating a recruiting class can be tricky. Standardized national ranking metrics exist, like Scout, but have inherent bias built into their algorithms. As has been pointed out by some of our commentors, national rankings include calculations based on the amount of certain star rankings, essentially penalizing smaller recruiting classes.

Average star ranking for a class can be used, but that too can have some bias. Is it better to have two 5-stars and a 2-star, or three 4-stars? Both have the same average. Certain star ratings (what are star ratings?) are also dependent on the national rank of the high school athlete that particular season, so comparing season to season isn't exactly apples to apples.

Some people prefer to look at what offers the recruits in each class receive, leading to the now popular statement "at least WSU is beating out BCS schools and not Big Sky schools". This method of evaluation is not without its own caveats; the total number of BCS offers per season can vary, certain universities will not offer kids they know are solid to another school, and class totals could be skewed by one or two athletes receiving a large amount of offers.

Understanding those caveats, we have a plot that demonstrates Coach Leach and his staff are bringing in a higher quality of recruit than we've seen on the Palouse in a long time. 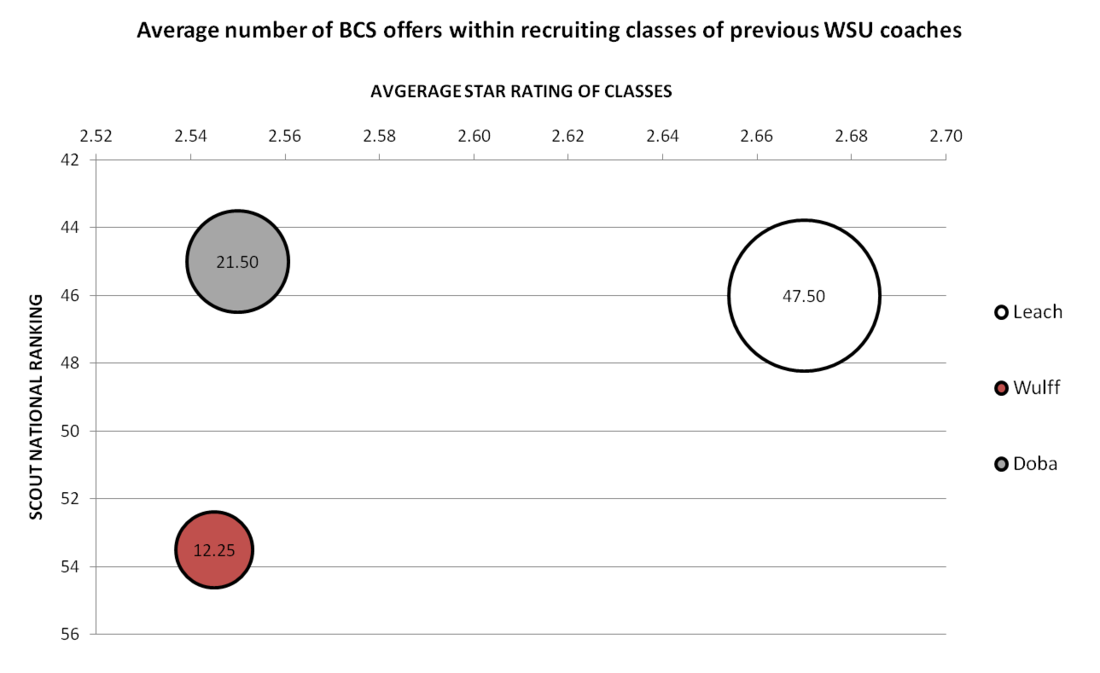 The bubble plot displays three fields of data; the average national rank of the recruiting class (Scout, Y-axis), average star rating of recruits (Scout, X-axis) and the average number of BCS offers per class (bubble size). All recruits during transition years were counted for the incoming coach.

A couple things stand out. First, Coach Leach's recruits are more highly coveted by BCS schools than his two predecessors.

On average, players recruited by Coach Leach and his staff garner 4.1 BCS offers (Wulff: 2.7, Doba; 3.0), this includes WSU's offer. There is also a larger standard deviation within Coach Leach's classes (Leach; 2.14, Wulff; 0.83, Doba; 1.17). This means that as of now the number of BCS offers cannot be said to be statistically different, but it is really close. Despite the lack of statistical significance, the discrepancy in average BCS offers per class is really startling.

Second, it is possible to achieve a high(ish) Scout national ranking without landing recruits with a large number of BCS offers (Doba), although this is skewed with a 21 rank in 2004. Removing that class from his dataset drops the Coach Doba average rank from 45 to 51, much closer to where Coach Wulff was.

What do you think? Is this graphic an accurate depiction of the recruiting class talent each coach brought to Pullman?