Think you need an advanced degree in Bracketology to work up a competent NCAA tournament field projection? Think again.

With Selection Sunday now less than a week away and a few conference tournaments having already been completed, the discussion of who's in and who's out of the NCAA tournament is starting to reach a fevered pitch. There literally are dozens of bracket forecasters out there, each of whom has a favorite and highly nuanced way to try and read the tea leaves with regards to what the selection committee will do on March 17. The Bubble Watch is on in full force.

This is much simpler - and more straightforward - than that.

I used to be a contributor at the now defunct Basketball Prospectus, and for the last couple of seasons, we preferred a simpler approach: The Easy Bubble Solver. Created by Basketball Prospectus contributor Drew Cannon, the Easy Bubble Solver really is this easy: Add together a team's RPI and Ken Pomeroy ranking, order them, and take the top 37 teams.

Believe it or not, it actually works.

The EBS would have correctly picked 198 of the possible 210 at large teams over the past six seasons - a 94.2 percent success rate. (Or, about what the bracket experts generally pick correctly after studying the committee for years and watching hundreds of hours of basketball each season.) In fact, the EBS correctly picked 36 of 37 at large teams last year. Sadly, like most of its human counterparts, the EBS whiffed on South Florida, electing to include Miami, Fla., instead.

While Cannon was the brains behind this highly complicated formula for projecting the tournament field, I became the curator. We published the first edition of the EBS last week at Basketball Prospectus, but since that site has now shut its doors, CougCenter will be the new home up until Selection Sunday.

To the forecast! (Rankings through games of Sunday, March 10.)

Five teams already are in the field, including Belmont -- a team that was projected to be safely in via the EBS a week ago, but squarely on the bubble by the humans up until they claimed the OVC's automatic bid with a heart-stopping overtime win over Murray State.

Middle Tennessee, however, isn't as fortunate as the Bruins: The Blue Raiders have left their fate in the hands of the committee after bowing out in the Sun Belt Tournament on Sunday at the hands of Florida International. Where they land in the EBS just might surprise you. 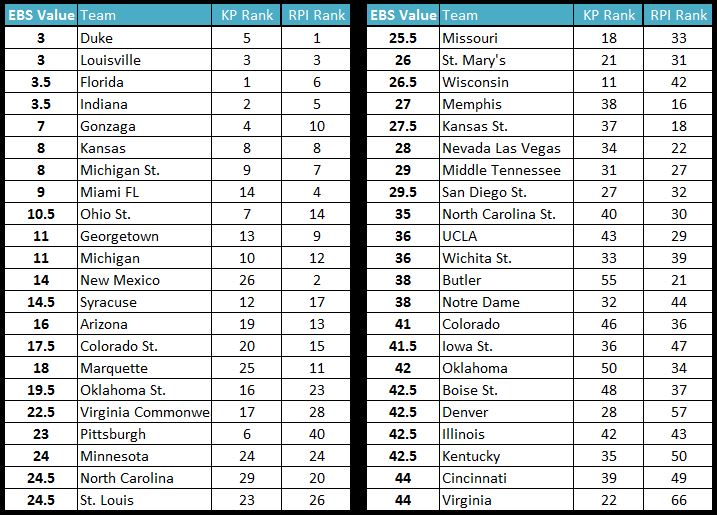 Apparently, those pesky Blue Raiders are going to be the ultimate test of the credibility of the Easy Bubble Solver. It looks like they're safely in. But the composite field of the Bracket Matrix is much less decisive.

As for more mild surprises, how about Denver, out of the WAC? The Pioneers have finished the regular season on one serious run, which culminated with a beatdown of first place Louisiana Tech on Saturday. While my laptop is convinced they belong, Denver lost all of its early season chances to pick up a quality win, leaving the humans much more skeptical. Of course, the Pioneers still retain the right to make the debate moot by capturing the WAC championship.

Another mid-major, St. Mary's, looks safely in this way, but the Gaels are close to the bubble in human projections. They can lock up their bid tonight with a win over Gonzaga. Boise State's position in the human projections is even more tenuous than that of St. Mary's. Major conference teams thought to be on the bubble by the humans but more safely in via the EBS include Virginia and Kentucky.

Ah, Connecticut. Because of your past academic transgressions, you are not going to be invited to the dance. Is it better or worse knowing that you likely would have been in if you were eligible? As a fan of a team no less irrelevant than Washington State, I'll say better. Feel free to disagree.

This bubble is where things really start to get a little wacky. That final weekend turd laid by Oregon took the Ducks from a Pac-12 championship contender and safely in via last week's EBS to all the way out of the tournament here. The humans at the Matrix still have a lot of faith in the Ducks, a consensus nine seed, but what about their resume is so bulletproof? Wins over Arizona, UNLV and UCLA are nice, but none of those teams are as good as they were believed to be when Oregon was making its way into the top 25.

Relatedly, the Pac-12 - once looking pretty safe to get five teams in - now appears to only have three sure things. However, there's still the chance for Oregon, Cal and Stanford to play their way in at the conference tournament this week in Las Vegas. Given how tight the league has been this year - nearly 25 percent of the league's games have been decided by four points or less, and the distance from first place to last place in John Gasaway's Tuesday Truths is the smallest amongst the nation's top 11 conferences - expect a wild tournament at the MGM Grand. It'll actually be surprising if a lower seed doesn't make it to at least the championship game.

Other discrepancies with the humans? We've got a pair of teams from Mississippi in, including Marshall Henderson and his teammates (c'mon, you know you want him in the field!). The Temple Owls, sadly, did not impress the laptops enough with their win over VCU Sunday morning, and Tennessee also is out - that's a team the humans have put in the field, but you don't see them above because the Vols actually are in the next next four out via the EBS.

Disagree? You can feel free to do that, but just remember: It's awfully tough to argue with a computer. And results!