The Easy Bubble Solver takes its latest peek at the NCAA tournament field of 68, where the Kentucky Wildcats, Virginia Cavaliers and Villanova Wildcats all are holding steady in the field.

As we continue to watch the NCAA tournament bubble as Selection Sunday approaches, we'll readily admit there's been very little change at the bottom of our bracket projection since we published our last edition of the Easy Bubble Solver on Monday.

After all, none of the teams hovering around the bubble -- including Kentucky, Virginia and Villanova -- have played since Monday.

Of course, that will start to change significantly in the next 48 hours. But we wanted to give our brothers and sisters who are fans of the teams around the bubble an update, even if things haven't shifted much. I've also included a column to show what's changed since the last time we published.

To the forecast! Rankings through games of Tuesday, March 12.

There are now 12 teams in the field, including Western Kentucky - the team that ended up grabbing the automatic bid that was slated for Middle Tennessee, which finished a full five games better than South Alabama in conference play and eight games better than the team it lost to in the conference tournament, Florida International. If this was major league baseball, the Blue Raiders would have won their division by 40 games. Their efficiency margin in conference was a ridiculous plus-0.25 - they had the league's best offense and defense, each by a wide margin over the next closest finisher.

And yet, they get to sweat. And hope for no bid stealers as the major conferences get their tournaments under way in earnest today. 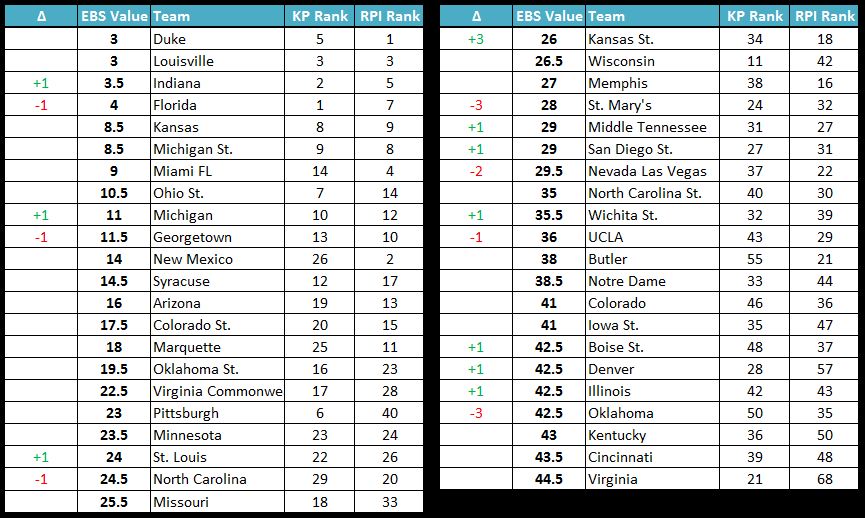 Not a lot of change here. Despite losing big to Gonzaga -- a loss that put some doubt in the minds of the human forecasters -- St. Mary's still is safely in. Oklahoma, though? You're moving closer to the bubble! You shouldn't really be all the worried, though: You simply dropped one spot in the RPI, which put you into a big tie with Boise State, Denver and Illinois.

Kentucky and Virginia, you're still holding steady above the bubble.

Just a little bit of subtle shifting here, but nothing major. All of these teams still have chances to play their way in.