It's mostly been modest shuffling within the ranks of the Easy Bubble Solver as we work to project the NCAA Tournament field, and finally -- FINALLY! -- we have our first change in the field in the past few days.

The reason there hasn't been much shifting isn't hard to figure: Many teams on or near the bubble either haven't played up until today, or they beat teams yesterday they should have beaten, or they lost early in their tournaments and missed out on an opportunity to move up. But one team suffered a devastating loss that dropped it all the way from safely in to now almost certainly out of the field. Read on to find out who.

To the forecast! Rankings through games of Thursday, March 14.

No change here, as there will be no more automatic bids handed out until Saturday. 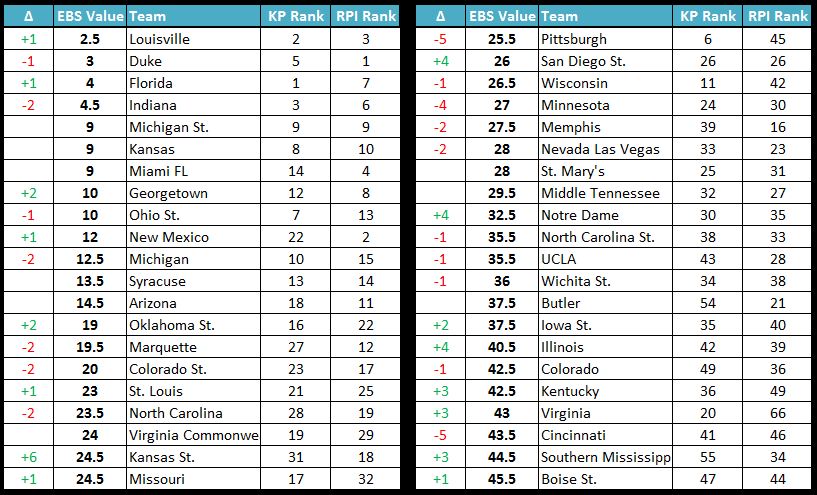 A few teams really helped themselves yesterday. Iowa State wasn't all that far from the bubble, but knocking off Oklahoma moved them into undeniably safe territory. Same for Illinois after its thrilling last-second win over Minnesota.

Southern Mississippi is going to join Middle Tennessee as an interesting test case of the EBS. The Golden Eagles' 15-point win over UAB probably didn't impress the committee much, but it did move them off the EBS bubble. A win over UTEP isn't going to do much to impress anyone, either. A win over Memphis, though, will definitely do that, but if that comes about, it will secure an automatic bid to the tournament. If Southern Miss beats UTEP, it likely will the Eagles' "safely in" status via the EBS, but a loss will put them right back on the bubble, so I will be watching that game today with great interest.

Colorado, Kentucky, Virginia, Cincinnati (after a brief jump up yesterday) and Boise State continue to hang around just above the bubble, but the Buffs and Bearcats probably aren't in any real danger of dropping down, since their seasons ended yesterday with losses to quality teams. The Broncos, though, are so close to the bubble, it won't take much for a team such as La Salle, Mississippi, Temple or Iowa to jump over them today or tomorrow, as each of those teams has an excellent opportunity in front of it.

Oh my, Denver. The Pioneers were absolutely rolling, putting an exclamation point on their awesome season by whipping Louisiana Tech in the WAC season finale. And then they go out and lay an absolute egg against Texas State, a team they had beaten by a combined 24 points in the first two meetings. And Denver trailed the entire game, to boot. Not a good look, guys, and it almost certainly cost you a shot at an at-large berth.

Villanova is considered safely in by the humans, but their sizable loss to Louisville didn't impress the EBS. There's certainly a chance they get passed by some combination of Mississippi, Temple and/or Iowa and are left on the outside looking in come Sunday.

And man, Cal. That hatchet job of an ending against Utah, complete with giving up a nearly unfathomable 20 points to the Runnin' Utes in the overtime -- or, as it could be said, more than 25 percent of their points in 11 percent of the minutes -- really did a number on Cal's spot. The Golden Bears will certainly not get into the EBS last four in, yet they're considered a mortal lock by the humans. We'll see on Sunday.

Baylor also missed a huge opportunity last night, falling way, way behind Oklahoma State before mounting a furious comeback that came up just short. It's hard to imagine any of the teams above them falling below them at this point.

And then there's Tennessee: Generally considered in by the humans, still far away from the last four in by the EBS. Playing Mississippi State won't do anything for you with computers, but playing Alabama will -- especially if the victory is decisive.

Can't wait to watch today's action and see what happens if Ole Miss, Temple and Iowa all win. Of course, the way this has gone so far, they'll probably all lose.