The Cavaliers' decisive loss to NC State proves costly, while Kentucky wasn't punished as harshly for its loss to Vanderbilt via our devilishly simple NCAA tournament projection.

Share All sharing options for: NCAA Tournament Bubble Watch: Virginia falls out of the bracket, Kentucky still barely in

There hasn't been a lot of action in our projection of the NCAA tournament field the last week or so, but that all changed today -- in a big way.

Virginia and Kentucky are the two major conference teams who have been the subject of the most scrutiny over the past few weeks -- for entirely different reasons. The Wildcats are the defending champs and usually a fixture in the field, but they lost their best player to injury and haven't played very well since. The Cavaliers, on the other hand, have a crazy resume: Really good wins over Duke, Wisconsin, North Carolina and NC State, but practically inexplicable losses to George Mason, Delaware and Old Dominion.

However, only one of them dropped out of the field with a disappointing loss on Friday: Virginia. Kentucky, conversely, is still hanging on by a thread, but ought to be rooting pretty hard for Maryland to lose.

As for the rest of the bubble ... goodness, does anyone actually want to be in this tournament? So man "win and you're in" teams, so many losses. However: Could the Terrapins actually play their way into the field at this point without winning the ACC Tournament? Read on to find out.

To the forecast! Rankings through games of Friday, March 15.

No change here, as there will be no more automatic bids handed out until later today. 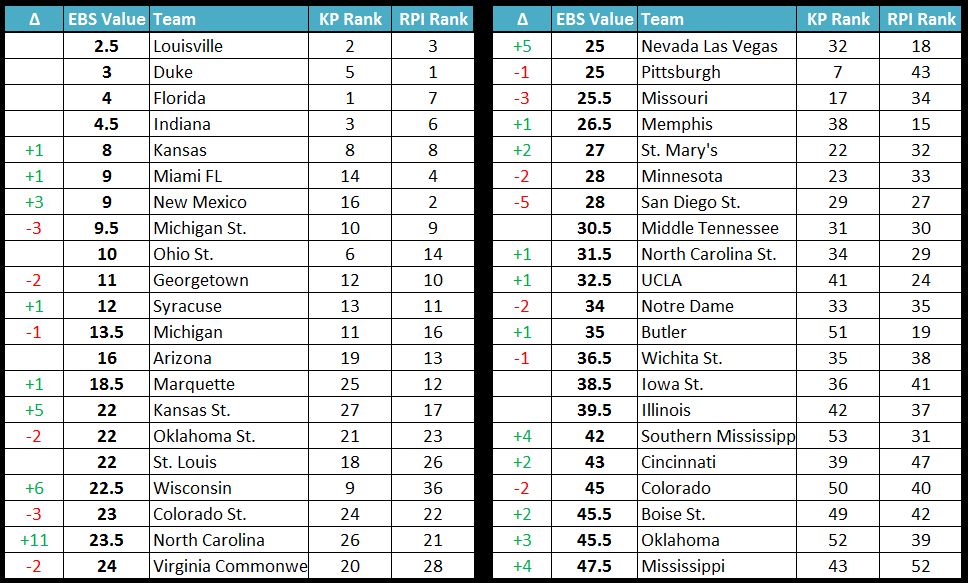 Congratulations, Mississippi! Your win over Missouri almost certainly solidified your place in the field. I suppose there's a possibility that the Rebels' butts getting handed to them today by Vanderbilt could change the way the metrics see them, but that's doubtful. The Rebels are most likely in.

Southern Mississippi continues to strengthen its case for being in the field, although the Golden Eagles could make all of that moot with a win over Memphis today. Still, at this point, there's absolutely no way they drop out of the EBS projection.

Oklahoma and Boise State, meanwhile, saw their stock rise ever so slightly, but that's generally more due to other people around them losing after they did and dropping accordingly. Still, they look good relative to their mediocre peers, only a couple of whom seem to have any interest whatsoever in grabbing a spot in the field.

Well, there you are, Kentucky and Virginia.

Kentucky is barely hanging on, but their spot is actually probably pretty secure. There's probably nobody behind the Wildcats who are going to play their way in front of them -- Akron is either going to win the MAC's auto bid today against Ohio, or the Zips are going to be out. The one scenario that could cause a major problem for both Kentucky and La Salle? Maryland winning the ACC's auto bid. It's unlikely the Terrapins could do enough to play their way into an auto bid, even with a win over North Carolina and loss to Miami or NC State. That means the bubble will shrink if they can somehow take it all tomorrow, and Kentucky and La Salle are the most likely casualties.

There's also another odd scenario that could play out: Denver is just a hair behind both of them. While it's unlikely the Pioneers' metrics change much by tomorrow, there could be just enough subtle shifting to move them back into the field. However, I'm selfishly hoping that doesn't happen, because my brain tells me that there's no way Denver is in the actual field. But the committee has done more head scratching things before.

As for Virginia, I'm going to be honest: The EBS says they've got no chance to get in the field at this point, and the human forecasters seem to agree, as virtually all of them have the Cavaliers out in their latest projections. There's just nobody left to fall below them at this point.

The EBS thinks the same thing about Temple after its loss to Massachusetts, but Temple is a team that is considered a lock by human forecasters. RPI obviously likes the Owls enough because of their record, but it's easy to see why Pomeroy's metric doesn't think as much of them: The Owls have won a lot of close games against some not very good teams, and lost to some pretty bad ones. However, wins over Syracuse, St. Louis, VCU and Villanova probably will get them in.

Oregon also was considered a lock by the human forecasters before the Pac-12 Tournament, and that's finally come to fruition after the EBS was much more skeptical of the Ducks' standing. It appears that's a moot conversation, as the Ducks either will earn an automatic bid tonight with a win over UCLA, or they'll sustain a loss that is unlikely to affect their standings in the metrics very dramatically. Beating Utah isn't a huge deal, but the manner in which they did it -- combined with losses around them -- opened the door for the Ducks to move up a bunch.

You'll note that Tennessee is no longer even in the Next Four Out after its decisive loss to Alabama. The Vols are done. The Crimson Tide, however? They will jump up a bunch with a win over Florida today. How much though? Maybe we'll find out tomorrow.