It's Selection Sunday, and here's our almost final Easy Bubble Solver projection of the NCAA tournament field, where the last two in (Kentucky and Denver) and the first two out (La Salle and Virginia) are nearly indistinguishable.

Share All sharing options for: NCAA Tournament Bracketology: On Selection Sunday, Kentucky still in, Virginia out

Why isn't this the last one? Because the Easy Bubble Solver needs all the data before it's final, and that won't happen until all of today's games are complete. So we'll do one more tonight or tomorrow to see how the EBS actually stacked when it has all of its data. (Hey, the humans are allowed to submit one last one, so our spreadsheet should be able to do the same!)

That wouldn't seem like a big deal, but it might be. That's because there literally is one half of a point separating the last two teams in the field (Kentucky and Denver) from the first two out (La Salle and Virginia). Just a small shift in the Pomeroy and/or RPI ranking of any of those teams could move one up and drop one out.

The good news for all these bubble teams? There are no potential bid stealers left among the eight teams in the conference tournaments that are to be decided today; all of the teams still playing are safely in the field.

As a special bonus today, I've included a seeding projection at the bottom via EBS. It's ... interesting.

To the forecast! Rankings through games of Saturday, March 16. 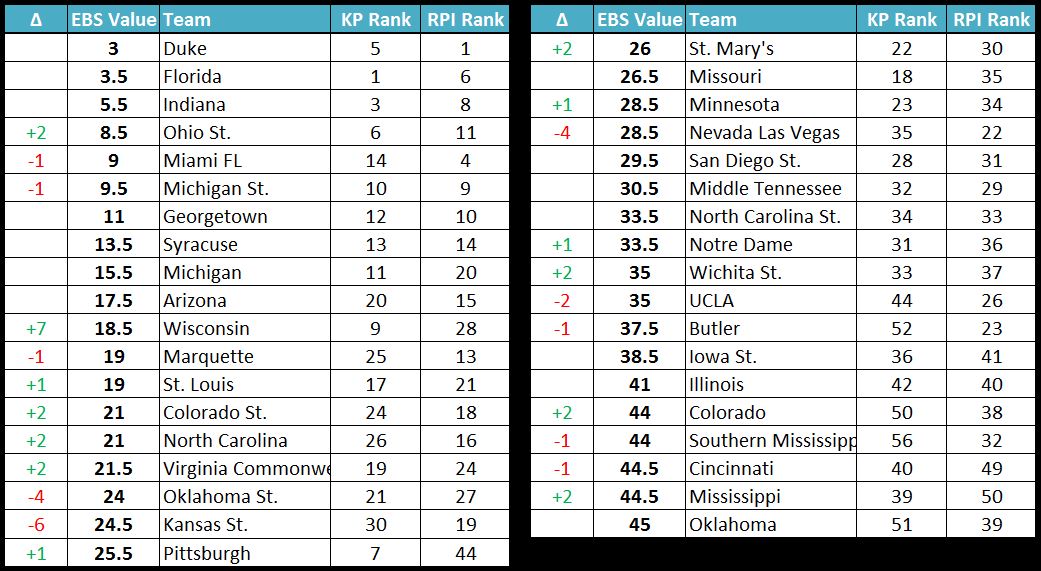 Since the Easy Bubble Solver diverges from the human forecasters on a number of teams -- and since none of the bubble teams have any games remaining -- I figured a good way to finish this off is to use the Bracket Matrix's composite field from this morning to highlight the major differences between the two so you can keep an eye out for these teams when the bracket is unveiled later today.

Remember: For the EBS (at right here, anyway), it's not about seeding -- it's simply about figuring out who's in or out. There are 88 projections in the Bracket Matrix, so I included the percentage of bracket forecasts each team appears in.

And lastly, just for funsies, here's how the bracket would be seeded if it were seeded strictly by the EBS. This pays no attention to any seeding principles/pods/s-curve rules, etc. 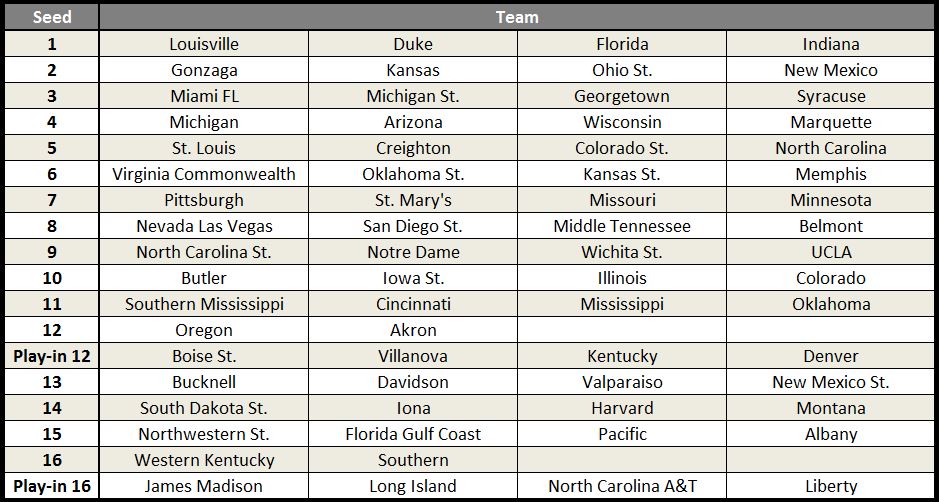