Our spreadsheet misses on Temple, California, Southern Mississippi and Denver, but hits on Boise State and La Salle.

Now that all the data is in we can finally deliver a verdict: In terms of projecting the NCAA tournament bracket, the Easy Bubble Solver did pretty well, nailing 35 of the 37 at large bids with our simple formula.

It's no big shock to see where the EBS whiffed: The inclusion of Southern Mississippi and Denver -- DENVER! -- were sizable outliers when compared the projections over at the Bracket Matrix. The Golden Eagles appeared on only 14 projections this morning, and Denver appeared on exactly ... zero.

The Pioneers are a fascinating case. Their inclusion in the EBS field comes mostly from their excellent kenpom.com ranking. But in terms of building a traditional tournament resume, they frankly didn't have one. They played a tough schedule right out of the gate and lost five of their first six games, to Iona, California, Colorado State, Southern Mississippi and Stanford -- the last four by double digits. At that point, they were 119th in Pomeroy's ratings.

But then they started to figure things out -- over their next five games, they would lose to Wyoming and Louisiana Tech, but both were reasonably tight games. Then they got on the roll of rolls, winning 17 of their final 18 games, generally annihilating the WAC along the way. Their Pomeroy ranking -- which takes margin of victory into account and also weights more recent results more heavily -- climbed all the way to 28.

However, in the eyes of the committee, it didn't matter how dominant they were in their league. Actually, let me rephrase: I suspect that the committee didn't have the faintest idea just how dominant the Pioneers were -- since they almost were the slowest team in the country (346th nationally in adjusted tempo), their efficiency dominance is lost on those who only look at raw scores. (This also is why I think Wisconsin is underseeded relative to performance every year.)

I think Denver's exclusion exposes one of the big flaws of the NCAA selection process: When you're selecting teams based on a 30ish-game sample size, and you basically count every game the same -- which the committee does, with its emphasis on non-conference strength of schedule -- you can't stumble ... unless you've got a chance to make it up later. If your team is in a conference outside the top 10, you don't have those opportunities. 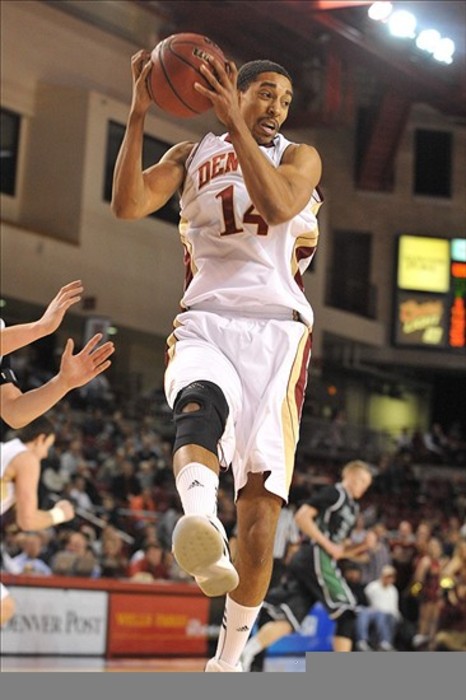 I don't know whether that's right or wrong, or whether I'd even change it. No system is going to get everything right, and I'm glad they incentivize teams to play tough opponents. I guess it's just an unfortunate byproduct and it sucks for a team that destroyed a respectable league but had a crazy outlier of a poor defensive performance in its conference tournament.

Anyway, back to the EBS. Southern Miss was an outlier the other direction: They had an incredibly high RPI -- 31 -- for someone left out of the field. The next highest ranked RPI team to get left out was Louisiana Tech at 53. But the Golden Eagles actually were similar to the Pioneers in that they missed out on every chance they had to get a quality victory, losing to Arizona, Wichita State, and three times to Memphis. They also lost to semi-quality opponents New Mexico State and Louisiana Tech. Thus, no tournament resume to speak of.

California and Temple were the pair of teams the EBS had out, but were actually in. Their exclusions were due mostly to Pomeroy's system not thinking much of them, combined with borderline RPIs.

In Temple's case, it was Pomeroy's system really not thinking much of the Owls. Where the committee saw a team with wins over Villanova, Syracuse, St. Louis and VCU, Pomeroy's laptop saw a team that struggled to beat Delaware, George Washington, Penn, Charlotte, Dayton, UMass and Rhode Island, and a team that lost to Canisius, St. Bonaventure and Duquesne. But wins are wins in the committee's eyes, and I would imagine they view close wins the way the rest of the general population does, as evidence of some sort of winning ability. All I know is I won't be touching the Owls with a 10-foot pole in my bracket.

With regards to Cal, I guess the committee saw wins over Oregon (twice), Arizona, UCLA and Colorado as evidence the Golden Bears belonged in the field -- even though their seeding choices showed they didn't think a whole heck of a lot of those teams. Because Cal also lost to Wisconsin on the road by 25, UNLV at home by 1, Creighton at home by 10, Harvard at home by 5, Washington at home by 15 and Stanford twice. Granted, those were earlier in the season ... but it seems to me that's exactly what Denver was punished for.

If I were king of the selection committee, I would have made sure Denver made the field. But honestly, I can't quibble too much with the discrepancies between the EBS and the actual bracket.

With that, here's a look at the final EBS results. 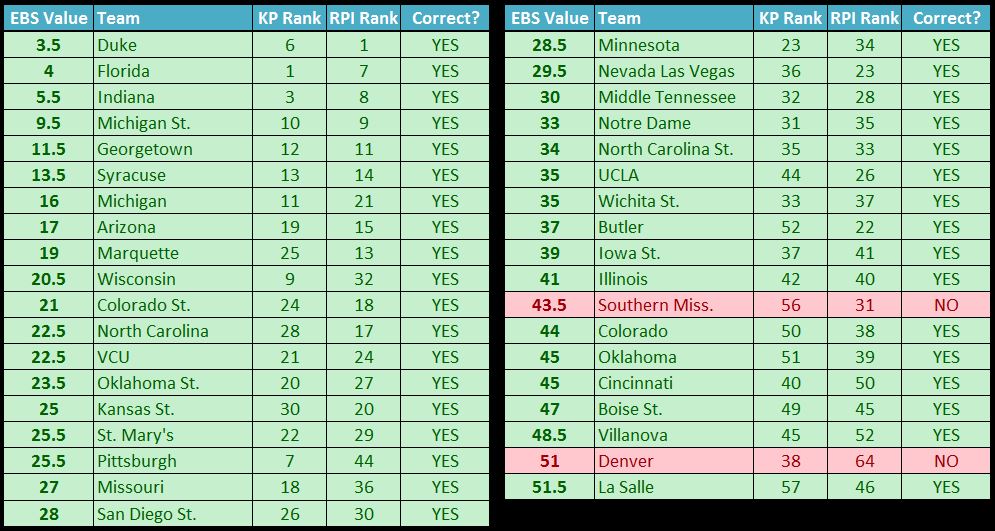 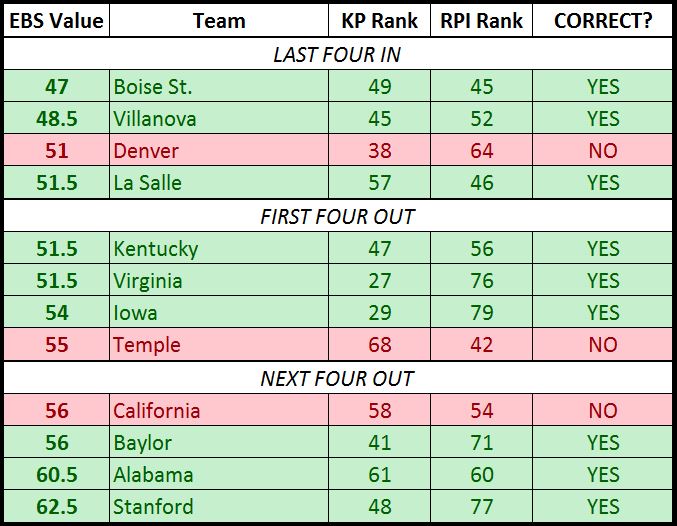 If you're looking closely, you'll note that La Salle, Kentucky and Virginia all finished with the same EBS Value. Because I can't very well have a filed of 70, I arbitrarily decided that RPI would be the tiebreaker, mostly because something RPI related seems to be the tiebreaker for the selection committee. Yeah, it benefited me that it put La Salle in the field that way. Sue me!

This morning, I posted a bracket seeded strictly off EBS values. Here's an updated version so you can see how it compares to the bracket unveiled this evening. 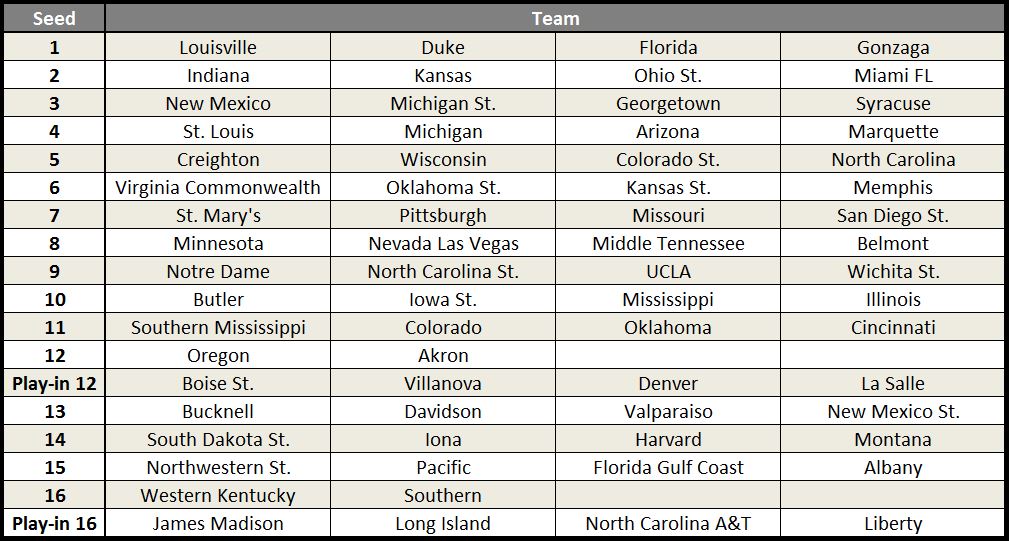 Turns out, the EBS really sucks at this! The Bracket Matrix uses what's called a Paymon Score to evaluate bracket projections -- three points for a team correctly in the field, two points for a team correctly seeded, one point for a team seeded within one line of actual seed. There are 408 points possible, and the EBS projection scored a paltry 298. We don't yet know what a good score is this year -- the Bracket Matrix wisely evaluates its standings using variance -- but last year's average score was 327.

Anyway, thanks for reading this year. Maybe I'll resurrect it next year.