We take a look at some basic pass blocking schemes and provide a host of external links for more in depth break downs.

During this next month leading up to the Crimson and Gray game, we will be presenting an Air Raid playbook series. The hope is that you'll get a better understanding of how the offense works and why it's conceptually able to exploit defenses, and if you're able to apply that to enhance your enjoyment of watching the Cougs, all the better.

Unfortunately, we don't have enough game film to do a WSU-specific post on pass blocking. Truth is, right now I just don't know what they do, and guessing wouldn't be very accurate without being able to see it on tape. Hopefully we can do something down the line after the spring game, but for now we'll have to settle for some basic examples.

I'll briefly present three fundamental pass blocking schemes without too much detail and include a host of external links, so if you feel like reading more on the topic you can find it easily.

With a quarterback in shotgun, the Air Raid pass blocking is almost entirely centered around a vertical drop. This limits what you could reasonably expect them to attempt scheme wise.

Pass blocking schemes themselves are fairly consistent team to team; the lingo may be different, but the schemes are essentially the same. I am unaware of any Air Raid-specific innovation for pass blocking, other than the wide splits, that is. Due to the struggles of the O-line last season, a lot of readers began questioning (on this site) the validity of using three-foot splits, rather than a typical 1- to 2-foot distance between offensive lineman.

Coach Leach addressed the reasoning behind the wide splits in his book "Swing Your Sword" (pg 61):

"The other programs we faced had their offensive linemen wedged together shoulder to shoulder. We wanted our guys to have wider splits with a three-foot gap between each man. It was an approach we'd seen BYU use successfully. If that was working, we'd widen out the gaps even more. Most people assumed those gaps left your quarterback more vulnerable. For us, it actually did the opposite. It forced the defensive line to stretch so that their defensive ends, who are their best pass rushers, would begin the play even further away from our QB than normal. The wider splits created running lanes and throwing lanes, reducing that glut of traffic you typically have in the middle of the line of scrimmage. And it made it harder for the defense to run stunts that would have otherwise lured our offensive linemen into picking up the wrong man once the ball was snapped. We were changing the geometry of the game"

Coach Leach makes many of the same points in this 2011 interview with X and O labs, adding that teams would try to shoot the gaps but weren't often successful because the only time they'd practice that technique was the week they'd be playing Texas Tech. WSU wasn't as fortunate last season.

Three major blocking schemes are called "B.O.B." (for Big On Big/Back On Back), "Slide", and "Combination". This terminology is more or less standard throughout football, but may not be exactly what Coach Leach uses. 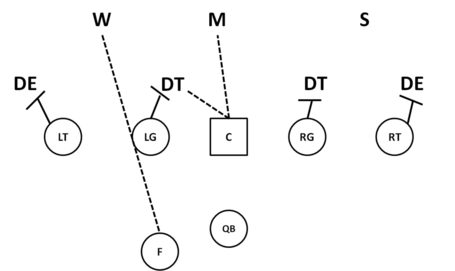 Obviously lineman will not move forwards during pass blocking, the assignments are just easier to see and comprehend when drawn this way.

"Big on big" means you have lineman blocking lineman and running backs blocking linebackers. This will avoid a mismatch where a smaller RB tries to block a pass rushing specialist at DE. The center will "combo" block with either the LG or RG, typically depending on which DT has the inside (A gap) shade. The two of them will combine to pick up Mike (middle linebacker) should he blitz the A or B gaps.

There are a couple of excellent external links below that go over the drop steps and blocking mechanics of each lineman if you're interested; Football Coach Daily and Iowa Wesleyan specifically cover it.

The "Mike" will be whoever the O-line (or QB) chooses before the snap. This will not necessarily be the same guy the defense assigns as Mike, but often is. You can sometimes hear QBs in the NFL call out "# is Mike", establishing the read for the rest of the line calls. On some teams the Center will have this responsibility.

In the diagram above, Sam, or the strong side backer is the hot read for the QB. No one is assigned to block him. If he blitzes, the hot route should occupy the space he vacates. If it doesn't, either the play call or the pass protection needs to change. The QB is said to be "responsible" for the Sam blitz; a sack by that player is entirely on the QB.

Who is read with the combo block can be slid to the right or the left, typically to the backside of the play. Here we see what can happen if it's slid to Will. 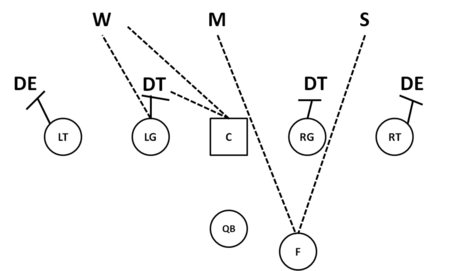 Moving the combo block can be very useful if the routes are known to target one particular side of the field, or one backer is known to blitz more frequently (perhaps situationally). In this case, the LG/C double the backside DT and pick up Will on a blitz, and F is responsible for one blitz to the right, whoever is the eminent threat on the QB. The QB is responsible for the other should they both blitz. 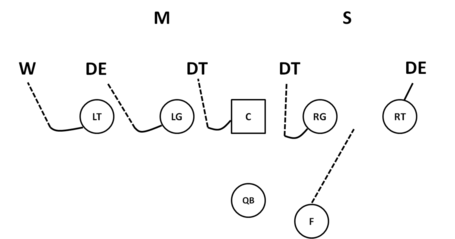 Slide is a zone, or "area" blocking assignment. All of the offensive lineman slide to the gap to their left or right during their drop steps , usually to the backside of the play, and pick up whoever comes at them. A "stunt" is when defensive lineman cross or a linebacker blitzes. Zone blocking assignments are designed to switch on stunts so that lineman take whoever comes into their respective zone.

Here is an example of a stunt the Stanford Cardinal used against WSU last season. 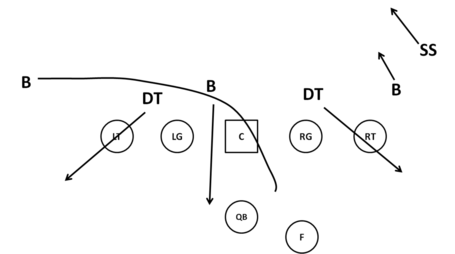 "B" is used to denote a backer

A stunt where rushers cross paths like this is called a "twist". DTs can twist with each other, shooting the A gaps, or with a DE and attack B gaps. In this particular stunt, the middle backer rips the A gap to the left of the center and the DT push to get outside leverage. These two acts combine to open a giant hole in the middle of the line, a perfect scenario for a speedy backer on a twist to exploit. Luckily for us, it was also a perfect scenario for Carl Winston to lay hat and give us this GIF (which almost makes up for the sack, almost).

If you're so inclined, you can recap some more of the stunts Stanford used (and see how the Cougs didn't block them very well) by following this link. 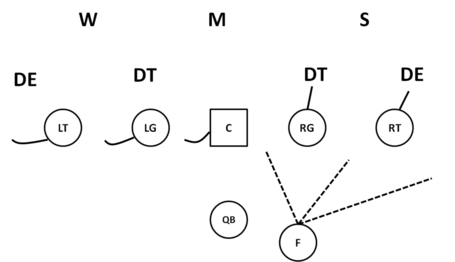 The last of the fundamental pass protection schemes is Combination, or "Combo". Half of the line slides for zone blocking (again usually to the backside) and the other half is B.O.B. Chris Brown (Smartfootball) believes most 6-man pass blocking schemes devolve into some form of this combination coverage as a play develops.

Cheeseheadtv.com - X's and O's of pass protection - very in depth on B.O.B and Slide variations

If you still want more after reading the Smarftfootball, Cheeseheadtv and Iowa Wesleyan links... your appetite for pass protection schemes is insatiable. Up next we'll go over what everything in the name of a Coach Leach play call means, including how the different blocking schemes are assigned.