We deconstruct another staple of the Air Raid playbook. It looks just like it sounds.

Share All sharing options for: Air Raid Playbook: All Curl

Leading up to the Crimson and Gray game, we are presenting an Air Raid playbook series. The hope is that you'll get a better understanding of how the offense works and why it's conceptually able to exploit defenses, and if you're able to apply that to enhance your enjoyment of watching the Cougs, all the better.

The "all curl" concept is about as straight forward a pass play as you can call. Everyone runs a curl route. The depth of the curl can vary between 5-10 yards, depending on how soft the coverage is.

The all curl has a few distinct advantages; all receivers will be facing the quarterback, present stationary targets and be scattered across the field sideline to sideline. The receiver will push the first steps of a curl route, selling a vertical to drive the defender deeper before breaking off in an open zone.

Curls will generally be 5 yard routes. If a defender is playing a little further off the ball (+7 yds or so), the receivers can push the curls deeper, but this is also depending on down and distance. No sense in pushing the route deeper when a first down is only 3 yds away. If they will give it to you, take it.

More in the Air Raid Playbook series: How to call a play Basics of pass protection The "Mesh"

H and Y will typically inside release and find the soft spots in the coverage zones between the outside and inside backers on either side, settling in front of the safeties. X and Z will sell verticals and break at 5 yd, turning inside toward the quarterback. Unless the coverage allows them to be a little greedy.

The first read is to the outside, pre-snap depth of the corners will indicate where the receiver will curl and who, if anyone, is facing soft coverage. The next reads are to the middle of the field. 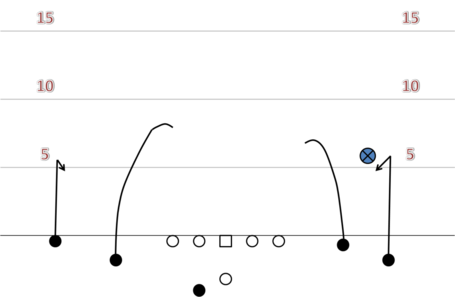 Red circled X's indicate a completion, blue an incompletion.
This route was ran on 4th and 2 in the Apple Cup.

The all curl is very useful on short yardage downs, or on first down because of its high completion rate. When a receiver is facing the quarterback, they will have a positioning advantage on the defender (like blocking out in basketball) and the quarterback will have a large, relatively stationary target to throw to. These factors combine for what should be a consistently executed throw and catch. The quarterback will often try to throw to a shoulder that leads the receiver to open field.