A flood concept that exemplifies how Mike Leach uses triangles to force the defense into making a mistake.

The next Air Raid concept we'll focus on is known as "Y-Sail", and it's a traditional flood style pass concept. The general idea is to overwhelm one side of the field with receivers, or flood it. Flood concept routes are designed to attack zone coverage, and aren't as successful against man coverage. 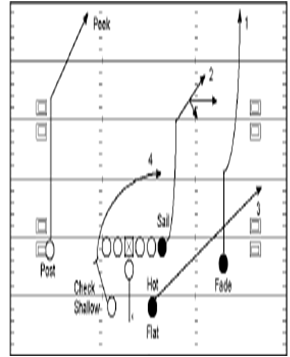 We see 4 receivers will end up to the right of the center, at 3 levels. Like the mesh play, the flood also generates a triangular stress on the borders of the flat. The defense is forced to defend the sideline at 3 separate depths, each 10 yards apart, without vacating the interior.

Coach Leach's variation of Y-Sail below changes a little from the BYU starting point above. 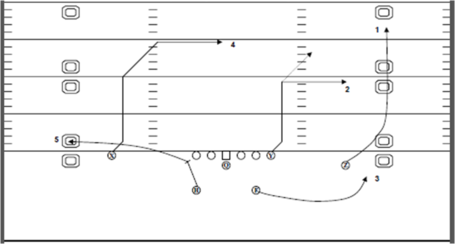 From the 1999 Oklahoma Sooners' playbook LINK

The X route was changed from a backside post to a deep drag, with the running backs responsible for routes to the flats. The drag will be just in front of the safeties and can throttle down in an open hole, or continue toward the sideline depending on what type of attention he's getting. If the defense over-pursues to the flood side by rolling a safety up, the drag can sit behind it.

Y runs what's called a "sail" route, named because the route options fan out to create what looks like a sail in the diagrams. If the defensive corner bails, chasing the deep route by Z, Y can flatten the route getting open underneath. If the corner sits, he can angle to the open space behind him. Quite simply, Y runs to the open space outside 10-15 yards downfield.

We saw a few variations of Y-Sail from WSU in the Apple Cup and ASU games. Like before, the blue circles are incompletions and the red circles are completions. 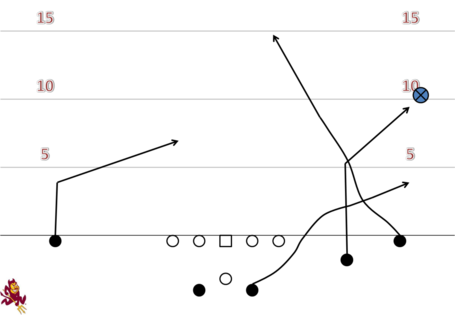 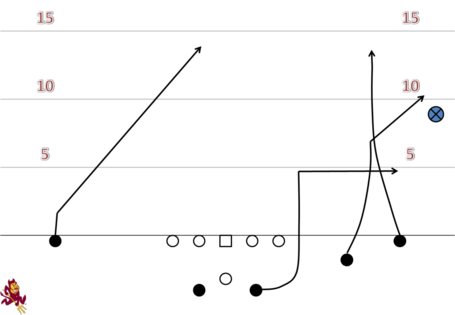 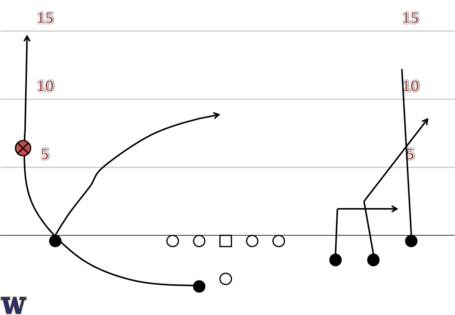 We've also seen a wrinkle where the middle receiver cuts back against the grain. 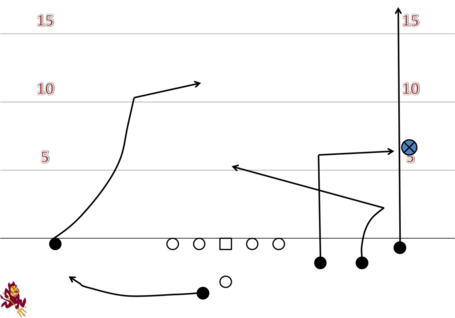