Want to hear a few members of the 1997 Rose Bowl team talk about the season? Well, you're in luck.

As part of Spokane Week, WSU held a "Great Games in Cougar History" night where Mike Price, Lamont Thompson and others gathered to relive the 1997 Rose Bowl. If you weren't able to attend the event, you can catch some of the highlights.

I know it's been a while since I've seen him, but Lamont Thompson does not look the same as I remember. 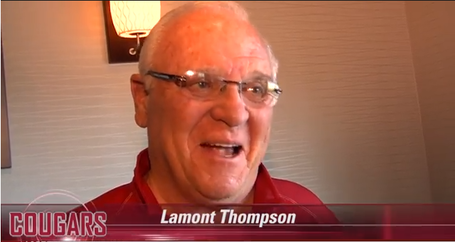 The actual Lamont Thompson also revealed an interesting tidbit. He's coaching football at his old high school which is the same high school WSU recruit Marcellus Pippins attended. It can never hurt to have a pro-WSU connection in a California high school.

Sporting News' Pac-12 football coach rankings: Mike Riley No. 2, Mark Helfrich No. 10 | OregonLive.com
5. Mike Leach, Washington State Cougars: We’re willing to give Leach a Mulligan for the disastrous Year 1 in the Palouse. He’s still the same guy who won consistently—and at times, big—at Texas Tech. It’s hard to ignore the massive rebuilding job he has undertaken—and that it might take more than one or two years.

Here is Christian Caple's story on Danny Lawhorn. Kyle Sherwood covered it here yesterday and his version included a joke, take that Caple.

WSU is back on the road this week, taking on California. The month of April has not been kind to WSU as the Cougars are 2-6 since the calendar changed. Damn April.