The mother of all Air Raid plays.

Four Verts: A route concept not only made famous by Coach Leach at Texas Tech, but likely perfected there as well.

This route concept was so potent -- and more importantly reliable -- for Coach Leach's Tech team, they went to it repeatedly on a game winning drive to beat Texas in 2008.

More in the Air Raid playbook: Reading a defense The Mesh

There is a nuance to Four Verts that might be somewhat lost on WSU fans. Cougs are very familiar with NFL caliber quarterbacks with big arms launching deep balls to streaking wide receivers. Washington State was (is?) QBU. 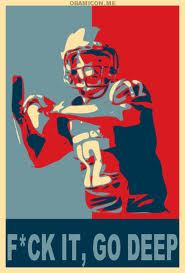 Maybe, just maybe we can convince you there's more to it than this.

If, after watching Mark Rypien, Jack Thompson, Drew Bledsoe, Ryan Leaf and even Alex Brink put on crimson, take snaps and chuck it downfield, you think all it takes for every vertical route to be successful was a big arm, decent timing and a fast wide out ... or at least two of those three (mandatory reference to offensive line blocking) ... well, that's understandable.

While that's certainly true to an extent, Four Verts is a different kind of vertical concept than what we're used to seeing on the Palouse. Devolving the concept to "go deep" removes a significant amount of what makes it so effective.

Four Verts requires such a high level of timing, and co-reading the defense by the quarterback and receivers, we actually didn't see it at all from WSU in the first few weeks of the season. The assumption was that the Cougs weren't able to execute the concept with the precision required during a game, which should be more than enough evidence that the play is a lot more than that Connor Halliday slogan to the left.

There's nothing tricky when we take a look at the diagram, Four Verts -- or as Leach calls it, "6" -- gives us four vertical routes. (Weird, right?) What makes this concept so versatile is how the receivers will adjust to coverage in route. 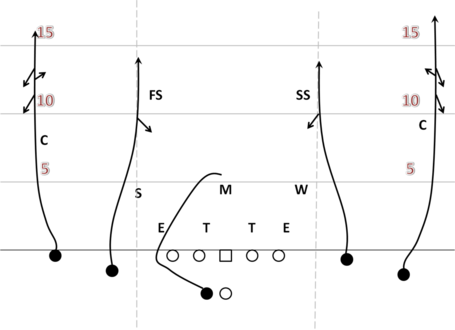 Wide outs will outside release and run upfield just outside the numbers, or on them depending on which hash the ball is spotted. This allows a receiver space to "fade" to the outside on a deep ball. From the top (inside) of the numbers to the sideline is around 9 yards; about 6 yards is needed for the quarterback to drop in a fade over the defender or for the receiver to create some separation on a break.

Inside receivers get down the hash. This creates equal spacing among the deep routes, which translates to a sideline-to-sideline coverage by the defense. The running back is the outlet, setting up in an open pocket underneath.

As in every other play, what the receivers will do depends on coverage, so both the quarterback and receivers need to identify it. Either pre-snap if possible, or within the drop step by the QB.

Starting with the outside receivers, we'll first look at Man (Cover 1/0) and Cover 4 (Reference secondary coverages here). In either of these coverages, the corner will be responsible for the outside receiver going deep. Two things can happen; the receiver can get a step on him and beat him deep, or the corner can effectively cover him, matching stride for stride.

At the moment the QB makes his throw, the receiver slams on the breaks and makes the catch, adjusting to the ball faster than the coverage back. The back shoulder throw is nearly indefensible by man coverage. The corner will have his back turned to the quarterback, making it impossible for him to know when the ball is thrown. With proper timing by the wide receiver, he can gain the few yards of separation needed just before the ball arrives.

Facing four vertical routes, either Cover 4 or Man (Cover 1/0) are ideal for a defense. If a defense is in Cover 2 or 3, it means they will only have 2 or 3 defenders guarding 4 receivers deep, someone will be open -- likely wide open. Against both of these coverages a quarterback will read the safeties. 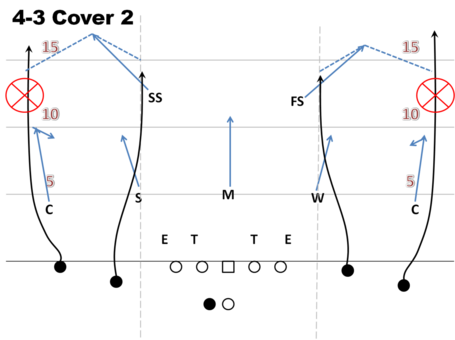 Against Cover 2, the weakness will be a hole behind the corner and in front of the safety (red circled X's). The corner will sit at the top of his zone in the flat. The safety will drop, angling toward the sideline and is faced with a choice: guard the inside receiver down the seam or the outside receiver down the sideline. Cover 2 is very poorly equipped to defend Four Verts. The quarterback picks his favorite side and reads the safety, whichever choice the safety makes will be the wrong one. Both throws, in the hole or down the seam, will not have a ton of loft. The longer the ball is in the air, the longer the safety has to recover. 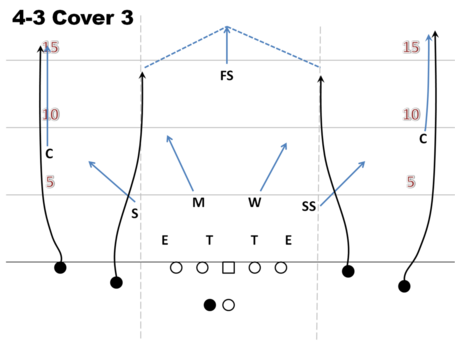 Facing Cover 3, the quarterback has some options. He can look to the outside receivers, if one is consistently beating his man or he likes the match-up. The receivers will have the same options they faced against Cover 4.

The QB also can pick on the free safety. The FS will have to choose which inside receiver to guard, and a QB can force that choice on him by staring down one receiver/one side of the field. Manipulating a FS like this is called "looking him off." As soon as the FS commits (turns his hips) to where the QB's looking, he can fire at the opposite receiver.

And against any coverage, there's always the option of just torching them deep. Boom the cannons and make the band play the fight song.