The former WSU wide receiver saw his stock drop precipitously after quitting the team, but the talent is undeniable.

We're into the third day of the NFL Draft, and although it's no guarantee at this point, it's expected that some team will select former WSU wide receiver Marquess Wilson in these last couple of rounds. The fans of that team are going to wonder just what they're getting, so since we know him better than anyone, we figured we could offer up this profile for them.

The first thing to know about Wilson is that he's talented. That much is undeniable. In less than three seasons at Washington State, Wilson left his name littered all over the school's record books. That might not seem like a huge deal, as WSU hasn't put a ton of wide receivers into the NFL, but professional football fans who aren't all that familiar with WSU outside of Ryan Leaf will want to keep a couple of things in mind.

First off, WSU was throwing the ball all over the field as a program before it was cool. A lot of balls have been thrown and caught over the past 30 years, and Wilson is right up there with WSU's best, finishing his career first in receiving yards and second in receptions and touchdowns, while also setting single season records in receptions and yards. And this is all in less than three full seasons.

One of the remarkable things about Wilson's achievements is that he did it on some epically terrible teams. You're probably tempted to think that he piled up all those yards because the Cougs were terrible -- throwing from behind and all that -- but you'd be wrong. Of course that happened occasionally, but when you consider how little time the quarterbacks had to throw (nearly 150 sacks taken in Wilson's three seasons) how much WSU was forced into throwing early and often, and just how talent-poor those teams were -- allowing defenses to basically focus solely on Wilson -- it's nothing short of remarkable what he was able to accomplish.

The best way I can describe him is deceptively amazing.

Now, that whole "less than three full seasons" thing is a story unto itself, but we'll wait on that. Let's talk about Wilson's skills.

Wilson isn't a speed merchant, but he's able to get behind defenders with regularity. There's a fluidity to his movements that allows him to blow past people who struggle to change direction as cleanly, and when he does catch the ball clear of defenders, he doesn't get caught from behind. He's also been known to house a screen or two. Out in the pattern, Wilson has a tremendous knack for finding the open spaces in the defense, and his hands are solid. At 6-foot-3, he's exceptional at winning balls in the air.

The best way I can describe him is "deceptively amazing." After all, I'm the guy who suggested he probably was a redshirt candidate based on his underwhelming high school videos ... right before he went out and posted the only 1,000-yard season by a true freshman in WSU history.

It's those skills that had draftniks projecting Wilson as potentially a fringe first rounder as he headed into his junior season -- one that seemed poised for posting even gaudier numbers in Mike Leach's famed Air Raid.

It never really worked out.

The first cracks began to show during Leach's first spring practices in 2012. The coaching staff was being noticeably hard on Wilson, demanding more from him than he was giving. Wilson had made his peace with it by the end of the session, saying (paraphrased) that while it wasn't all sunshine and rainbows, he was thankful for it because he knew it was making him better.

If that's what Wilson was saying, it was pretty obvious come fall that he didn't totally believe it. He continued to be a frequent target of coach criticism at practice, and his performance in games was inconsistent. He was even briefly passed up on the depth chart by a freshman, and Wilson -- who doesn't do a good job hiding his emotions -- appeared frequently frustrated on the field.

The Cougs were coming off their worst performance of the season, a 49-6 whipping by Utah, and as Mike Leach occasionally does, he canceled WSU's Sunday practice, favoring a conditioning session instead. At some point during the workout, Wilson simply walked away. And just like that, his career at WSU was over. 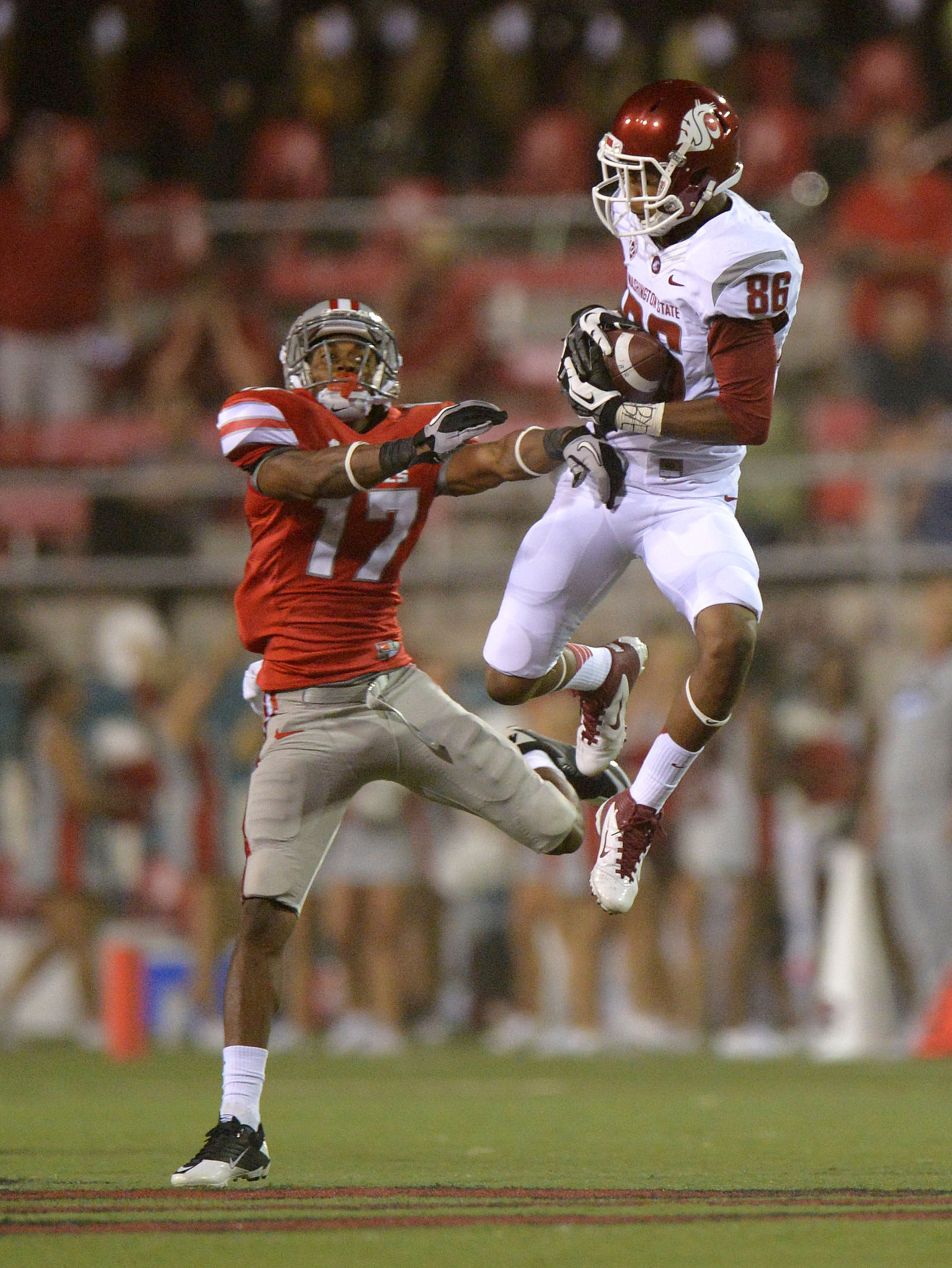 There was a lot more after that, of course. The following Saturday -- mere hours before the Cougs kicked off against UCLA -- Wilson (or someone close to him) sent a letter with his name on it to media outlets, alleging abuse by Leach an his staff. It eventually led to a pair of investigations into Leach's program.

Nothing came of the investigations, as Wilson even semi-recanted, telling Pac-12 investigators that no physical abuse took place. But the damage had already been done: Wilson didn't just burn the bridge at WSU -- he nuked it with mutually assured destruction.

And since the NFL has more patience for pot heads than players they perceive as lacking mental toughness or loyalty to their team, Wilson saw his draft stock fall precipitously -- to the point where he entered the draft projected as a late-round pick ... or perhaps even an undrafted free agent.

But if you're reading this, that probably means your team has taken a chance on Wilson. Will he pan out for you? It's a tough call.

What you think of Wilson's pro prospects depend largely on how you view what went down at WSU. If you think he left WSU because he's a quitter and a wuss, there's probably not much of a future for him in the NFL. Pro coaches aren't real patient with prima donnas -- unless they're so supremely talented that they have to be. Wilson is good, but he's not that good, which means you're expecting he'll be cast aside at the first sign of discontent.

If, however, you think he left WSU because he really was being treated in a way that was beyond the boundaries of decency -- because he's principled and has pride -- then your team very well could be getting a major steal. Evidence for this line of thinking comes from the fact that Wilson thrived under previous wide receiver coach Mike Levenseller, a man who is nobody's definition of a coddler. He's relentlessly demanding, and Wilson didn't seem to have any problems there.

So, what it probably comes down to is this: Does Wilson land in a situation where he respects the coaching staff because he feels like they are respecting him? If so, they could be getting a receiver who ends up looking like the steal of the 2013 draft.