Air Raid Playbook: How to call a play

Names of plays in football can sound like nonsense but really convey a ton of information in the fewest amount of words.

Share All sharing options for: Air Raid Playbook: How to call a play

In the weeks leading up to the Crimson and Gray game, we are presenting an Air Raid playbook series. The hope is that you'll get a better understanding of how the offense works and why it's conceptually able to exploit defenses, and if you're able to apply that to enhance your enjoyment of watching the Cougs, all the better.

If the names of football plays sound a bit like gibberish and you aren't sure what all the words and numbers could mean, this post was written with you in mind.

By understanding what needs to be conveyed in the name of a play, we can peel back the curtain on some of the lingo. Remember, because of the pace of the game the language of a play call is structured to convey the most amount of information in a manner that is the simplest to communicate.

Did you miss our previous posts on offense? Offensive formations Pass protection schemes

Rather than full sentences, only numbers, letters and coded words relate the who-what-when-where of each play. The structure of a play call is nearly universal throughout football. This is the most efficient way to relate play information -- so much so that high school and even youth football will use this structure. The numbers, letters or words used to relay each bit of information are strung together in this order to call a pass play:

It should be noted this is not referring to how teams signal in a play from the sideline. Those methods are extremely variable, like 3rd base coach signals in baseball. Those signals can be this information masked in another layer (or two) of code, but more often they simply give the QB a number to look up on his wristband that lists the plays.

There are two prevalent methods used to convey which routes the receivers will run: Passing Tree and Concept.

In a passing tree, each route is assigned a number. Words can also be used to call routes using this method, but this tends to make playcalls very wordy, and too complex for a simple example. 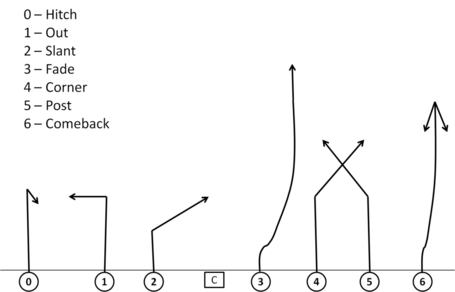 So for a trips (3 X 1) formation, like Early or Late (read up on formations here if you missed it), a 3-digit code would tell each trips receiver what route to run. These codes can be interpreted a few ways based on a coach's preference. Example; "341" which could be transcribed either -- left to right independent of the side of the ball, always inside-out, always outside-in, or be receiver specific. This example would be read outside-in, giving a "Flood" type pass concept. Below you can see how the routes look from trips to the right or left. A drag or backside post is ran on the opposite side of the trips. 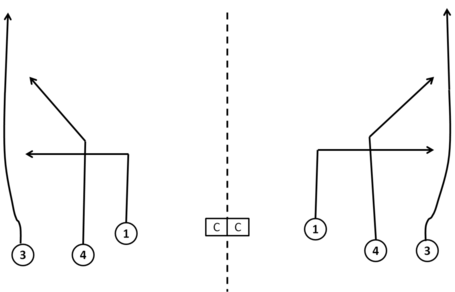 Passing trees allow a great deal of flexibility for the Offensive Coordinator during in-game play calling. An OC could be up in the booth, see what route would work by which receiver and essentially call a tailor-made play. It does, however, require every receiver to learn how to run every route from any position they could be on the field.

The other method, based on pass concepts, is preferred by Coach Leach. A "concept" means the routes are designed to be synergistic. Each route is part of a coordinated effort, they function to maximize open space on the field, attack coverage zones or cross man coverage. Each concept the coach draws up is given its own unique name/number(s)/letter, allowing the communication of every route by a single identifier.

Below is the same play given in our passing tree example, Flood (or Y-Sail in the Air Raid), but the concept is now identified by a single digit, say "5" (double digit numbers could also be used). You have a vertical, corner (or "sail") and flat route to the playside with a drag and backside post. We'll get into Y-Sail more in another post, this is only meant to illustrate how an entire concept is relayed using the two methods.

Diagram via Norm Chow reads in the BYU offense

The Air Raid is unique in its passing concepts;

We aren't sure whether Coach Leach assigns a single or double digit number to each of these concepts, but we do know this is his method. We also do not know with certainty what number corresponds with each concept.

If Coach Leach needs to change one (or more) routes in the concept, those route names would be tacked on to the end of the call by saying "Y-Option" or "F-Shoot" or whatever the specific case may be.

A typical way to denote pass protection, especially when using route concepts, is to assign each blocking scheme (B.O.B., Slide, Combo) a double digit series -- 50's, 60's, 70's, 90's are the most common used for pass protection (20's and 30's are usually reserved for rushing plays). This way a "4" route concept becomes a "94" in the play call, with the first digit identifying 90's pass protection.

Like with the pass concepts we don't know which number series corresponds to which blocking scheme, or if Coach Leach even uses this method specifically, but it is a very common way to call a play. We do know 60's and 90's have both been used by Coach Leach in the past.

This simplifies the play call down to something that can easily fit on a note card on the sideline.

Hopefully, after this post the structure of a football play makes a little more sense, if it didn't already. Last year Jeff Nusser went over how to install the Air Raid system and has some additional information there you might find interesting.

Throughout the remainder of our Air Raid Playbook series we will be going over each of the route concepts listed and providing some game examples.