My Favorite Moment in WSU Football History, Part 1 of Whatever

Kyle Sherwood breaks down some of his favorite lesser-known moments in Cougar Sports History.

Share All sharing options for: My Favorite Moment in WSU Football History, Part 1 of Whatever

While Preston counts down the greatest moments in WSU history, I figured I'd start peppering that delicious meal with some of my favorites that wouldn't have made the cut. These aren't necessarily moments of greatness, but just things that will always stick with me.

Today's nomination comes from 2003, when the Cougs headed down to Eugene to take on the Ducks. If you'll recall, Oregon had just come off a big week where they destroyed Michigan in Ann Arbor and made the cover of Sports Illustrated (Quack, Quack) 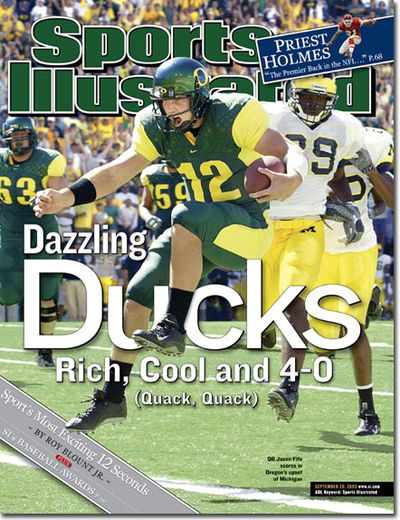 After two deep touchdown passes by Matt Kegel to Sammy Moore and Devard Darling, the Cougs had jumped out to a 17-2 lead after the first quarter, but Oregon's crowd was still in the game when Kegel opened up the 2nd quarter with a botched snap, giving the Ducks the ball on the Coug 40 yard line. What follows might be the greatest thing I've ever seen.

Duck QB Jason Fife sees that WR Samie Parker has beaten Jason David. Badly. There's a solid five yards between them. So all Fife has to do is get the ball anywhere in the vicinity of Parker and we'll have a one-possession game, right? Not this day. Fife drills Parker with a ball that couldn't have been thrown any more perfectly and the ball bounces off Parker's facemask and falls to the turf.

But it doesn't end there.

Despite being beaten as badly as someone could be on a 40 yard play, David takes it upon himself to saunter over to Parker to let him know the ball was on the ground. Parker takes exception to whatever David says and slaps his facemask, drawing a 15 yard unsportsmanlike penalty.

But it doesn't end there.

On the very next play, Fife drops back and fires a ball directly at THREE Cougar defenders and the defense had to actually fight over who was going to be the one to intercept the ball. Donny Jackson ended up with the honors.

The Cougs went on to win this game 55-16; WSU's last victory in Eugene. And probably the last season anyone's seen the Cougs have a defense.

Yes children, WSU did once upon a time play defense.