My Favorite Moment in WSU Football History, Part 2 of Whatever

Kyle Sherwood breaks down some of his favorite lesser-known moments in Cougar Sports History.

Share All sharing options for: My Favorite Moment in WSU Football History, Part 2 of Whatever

While Preston continues to heap praise onto the play that's probably been heaped out at this point(seriously, have you seen a ROOT/FSNW commercial since 1998 that didn't end with Bledsoe to Bobo?), the countdown of my favorite moments in Cougar history marches on. To those who never thought this series would get a sequel, I will remind you that lesser projects have produced more offspring (how many Air Bud movies are there now and after how many of those movies are they going to write into the rulebook that a dog can't play lacrosse?)

Today's nomination comes from December of 2002 where our once-mighty Cougars were clinging to their Rose Bowl chances after an Apple Cup that will probably hold spots #2 through #302 on our "Worst moments in Cougar History" list and were heading down to Pasadena to take on an also-reeling UCLA team.

For those who hopped onto the Cougwagon after this game, this ambience in the stadium for this game was surreal. You had a HUGE contingent of Coug fans who bought tickets a month earlier, presumably to scope out seats for the Rose Bowl three weeks later, and were now terrified they might have to book tickets for El Paso again. Also in attendance were a large faction of USC fans who were amusingly rooting for their hated brother Bears to pull off the upset, putting the Trojans into the Rose Bowl. On top of this were Bruin fans who 1.) didn't want to help the Trojans in a lost season and 2.) wanted to fire Bob Toledo and didn't want an upset of a Top-10 team to give Chianti Dan a reason to keep him.

Added to this that it was the last regular season game of the season and as many as TWENTY-SEVEN bowls had to wait on the outcome of this one game before they could fill their spots.

WSU seemed poised to take a 24-14 lead into halftime with a minute left in the 2nd quarter, as they handed the ball off to Jermaine Green up the middle twice, seemingly to run the clock out in the last minute. Jackson and Fouts throw the broadcast down to the sideline reporter to interview a newly-retired (and decidedly gigantic) Ryan Leaf, watching the game on the sidelines. Start watching the video now.

A 3rd and 11 play began during the 2nd question posed to Leaf, a seemingly innocuous draw up the middle again for Jermaine Green. Nobody was expecting the Mack Truck-sized hole that was blown for Green though, and the reporter cuts Leaf off to watch Green rip off an 80-yard touchdown run, running right past the interview in progress. 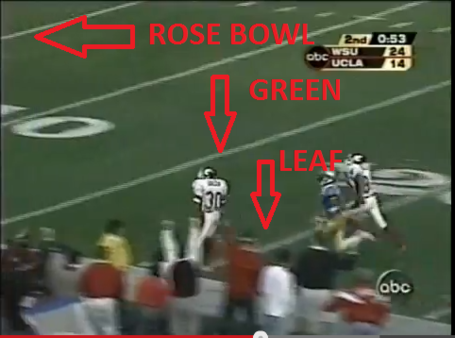 The Cougs thoroughly dominated the 2nd half and went on to win 48-27 and clinch their 2nd Pac-10 title in six years. More importantly, the play above was the one time in nearly four-thousand attempts that the Mike Price signature "draw play on 3rd and long" actually worked.