NCAA Football 14 player ratings: 10 best from WSU and every team

Information from the next edition of EA's NCAA Football game continues to be leaked. Now we know the best video game players from every squad in the country.

Share All sharing options for: NCAA Football 14 player ratings: 10 best from WSU and every team

The top 10 player ratings from every team in NCAA Football 14 have been revealed by the folks at Operation Sports, who took the time to scroll through all 126 rosters in the game and present it to us in video form. Washington State's most highly rated player is accurate, but most everything else just seems like a crapshoot from the folks at EA after that. The game even includes a mystery player who may become everyone's favorite wideout.

Here is the list of the 10 best for the Cougs: 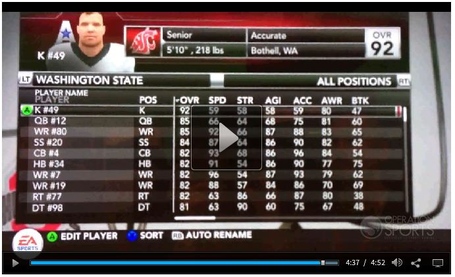 First off: Who the heck is WR No. 7? The game lists him as having 96 speed, so he is a burner. There is no player listed as No. 7 on the WSU roster, and there won't be. The number is retired in honor of NFL Hall of Famer and Coug Mel Hein. But with that speed, No. 7 will surely get some play by Cougar fans.

Furney takes the title as the top-rated player on the team. Not surprising, he is one of the most accurate kickers in the country and he has the All-American logo behind his fake mug in the video.

The quarterback is almost always one of the most highly rated players for WSU (and likely most teams). Halliday checks in with a modest 85 rating and apparently Williams' late-season play in place of Marquess Wilson really impressed the programmers.

Along the lines may be where the biggest question marks come from. Fullington is the team's best offensive lineman? That's terrifying. Pole gets the nod over Ioane Gauta? Obviously someone watched the Apple Cup highlights (although they only gave Pole 63 speed, COME ON).

The rest of the best players for each team can be found in the video below: